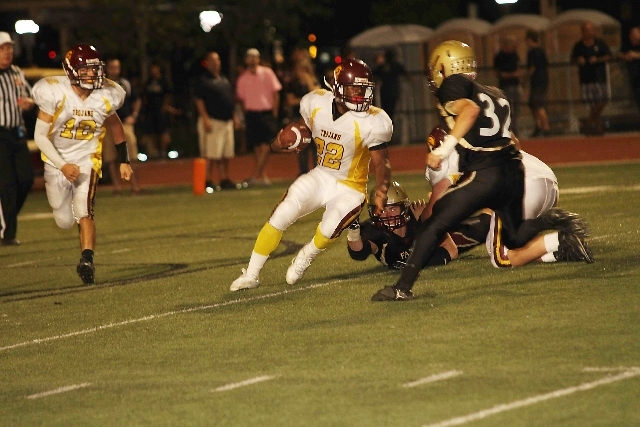 Football season is almost here. There are 29 days until the Trojans take the field in their first game against the Chaparral Cowboys from the Sunrise League in Division 1-A.

Over the summer, the focus of the Trojans has been conditioning and getting the Jet Sweep Offense ready for action. Head Coach Joe Clayton said it has been easier than getting last year’s pistol offense ready.

He tested the new offense at the University of Southern Utah’s football camp in early July and was pleased with the results.

This year’s offense will feature the play.

Last year, the Trojans’ running backs were led by seniors Cody Keasling and Erick Flores. They are gone.

Running back coach Craig Rieger said there will be more than one back.

“We will have Devontae Brown returning, Scott Maughan, Chad Uyeno, AJ Segura, Keenan Harris and Brandon Kaufman. It will be running back by committee so we have fresh runners. That is a good number. We have basically an outside-inside game where we set up the defense. We suck them in and play-action and throw over the top,” he said.

The Trojans ground attack will face the Cowboys on Aug. 30 at 7 p.m. It will be the home opener.

Last year, the Cowboys were 4-5 on the year and 1-4 in league play. Chapparal finished a little better in the win column than Pahrump did last year by two games. The Trojans finished the season at 2-8.

The new gear definitely boosted the spirits of the team, but whether or not it translates into wins is another thing.

The team, coached by William Froman, is ranked 47th in the state this year.

They have an untried quarterback this year, Jerome Williamson, 5’ 9” at 160 pounds.

Pahrump is ranked 53rd in the state. What this preseason poll can’t take into consideration is the Trojans new offense and the improvements the Trojans have made in the off season.

What is not in the poll is the depth coming back to the Trojans.

Quarterback AJ Segura will be returning. This will be his third year.

Scotty Maughan has two years as a linebacker. He will be leading a new, revitalized defense for the Trojans in juniors Jace and Jax Clayton, who are both in the 250- to 275-pound range and quick.

Trojans Coach Joe Clayton has already gone on record to say both defensive and offensive lines are much improved.