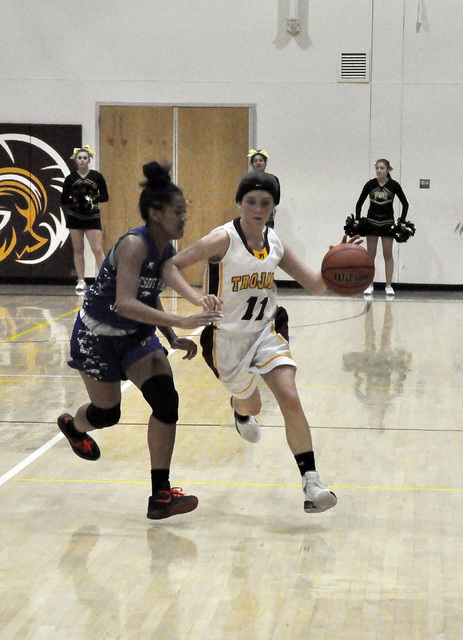 Pahrump (5-14 overall, 0-4 Sunset League) couldn’t get any of their shooters into the double digits.

The Pahrump boys will have a week to practice and prepare for Western (6-12, 2-2) on Jan. 24. The Trojans played Beatty as an extra game on Tuesday, which was past deadline.

Due to the midterm testing in the Clark County School Districtschedule, the Trojans didn’t have any league games scheduled for the week. According to Athletic Director Larry Goins, both teams needed a game.

The game more than likely was a competitive game. Beatty (8-2, 1-0) is on the road to a highly successful season this year, having mostly seniors on their roster.

The Lady Trojans beat Bonanza for the second time this season on Friday 35-25. The team (8-10, 2-2) is approaching the .500 mark, something they haven’t seen since 2009. At the half, the girls had a 19-9 lead. Pahrump had two girls shooting in the double digits, which has been rare this year for the team. Jill Smith had 12 points and Isabelle Meza had 11. Bethany Calvert had eight points and Alyvia Briscoe had three. The big question is, can the Trojans put all the pieces together and get more girls in the double digits against Western? This is something Hopkins has said his team needs to do.