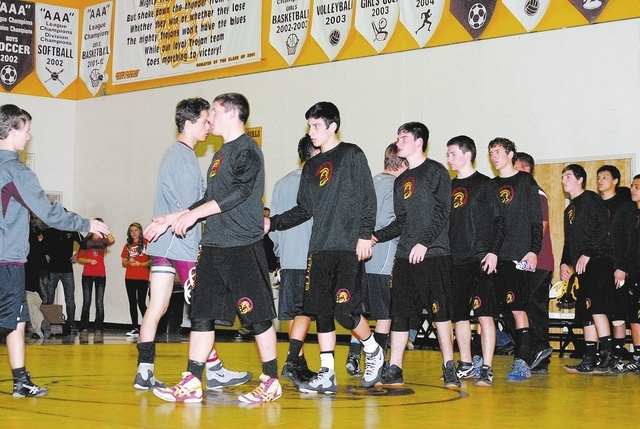 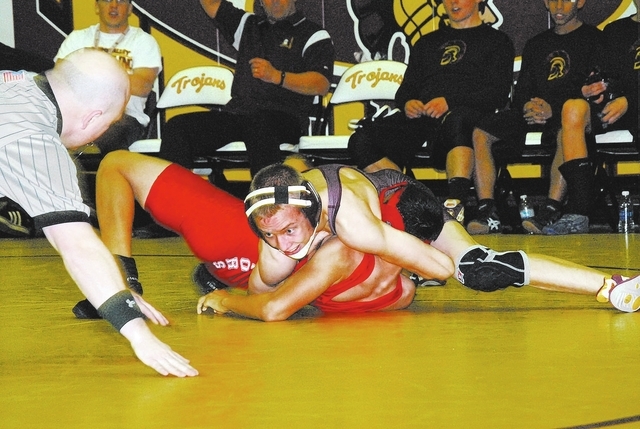 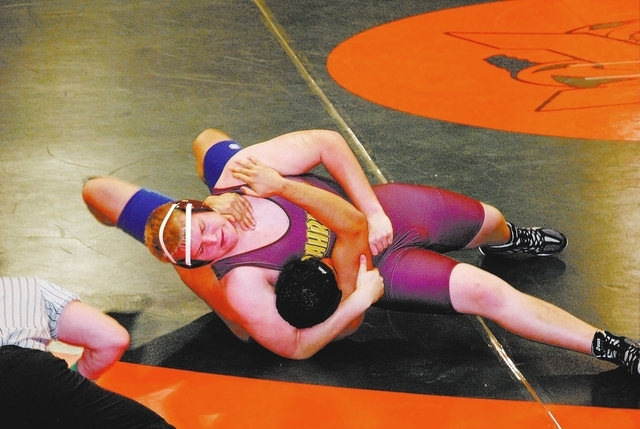 Saturday with only a full day’s rest, the Trojans made the trip to Mojave High School for “Mojave Mayhem”, where the team took on five teams in Division 1 and Division 1-A in a row. The team went undefeated to finish in first place and become the champs of Mojave Mayhem. They beat Canyon Springs 55-12, Del Sol 52-27, Sierra Vista 61-15, Bonanza 72-3, and Mojave 48-19.

Trojans Coach Craig Rieger was proud of his wrestlers’ accomplishment. He had six wrestlers go undefeated with only a day’s rest. (These wrestlers are listed first in boxed stats.)

Just before the Trojans wrestled both teams Faith Lutheran beat Western 54-23 at Pahrump earlier in the evening.

In the wrestling on Thursday, Pahrump was more than ready for battle. There really was no sign of fatigue from too much holiday cheer.

Faith Lutheran made a run early for the win by beating Pahrump in the lower weights 5 out of 6 times. The only light-weight to win was Levi Gundacker who beat his Faith opponent in the 120-pound class by pin.

“I did because I got to scout Western out pretty tight and McCormick has been wrestling really well. He has been getting after it all year,” Rieger said. “It was nice to be able to watch Faith go up against Western. Faith Lutheran had tough lightweights. I knew against Faith we were going to get to them after 138.”

The Trojans then started winning and turning the tide with senior Stephen McCormick at 145 pounds. McCormick promptly pinned his man and the team then went on to get 7 of 8 victories by pin and one forfeit for the victory against Faith.

After the Faith match, the Trojans turned their sights on the Western Warriors. According to Rieger, the Warriors had wanted a win against the Trojans for some time, but Thursday was not the night for the Warriors either.

Rieger said he had watched the Western team lose to Faith earlier that night and was not surprised how close they were.

“I saw that Western had some good individuals that were going to be tough, so I knew Western was going to be just as tough,” he said.

The Trojans lightweights did better against Western with Gundacker, Antonio Sandoval, and Joseph Zarabozo getting pins. The Trojans were able to get six out of eight pins in the heavier weights to take the win.

Jax Clayton at 195 pounds went 2-0 on the night and was pleased with his wins.

When Clayton was asked if he was having a good day, he responded with, “I felt I was on my game, it was just another good day. That is what we expect here with the tradition at Pahrump Valley High School, we expect to win. That’s what we do. I never thought I was going to lose. I was on top the whole time. I had my moves going and I kept transitioning with the second guy and I just caught him on his back.”

Jace Clayton at 285 pounds also had a great day. In his last match, he wrestled a guy who appeared to be heavier than him by about 40 pounds. When asked if this disadvantage bothered him he said, “It did not bother me that the guy out-weighed me by forty to fifty pounds, I mean most of the guys out-weigh me by that much. It was not any more difficult than the other ones. The guy never really worried me. I used a bar on him, which doesn’t always work for me, but it worked this time and it is one of my favorite moves. I knew I had the second guy once the bar slipped and I moved back on top of him, I knew I had him.”

Sam Tucsnak and Abraham Preciado were the only guys after the 145 pound class to lose against Western, but this did bother Rieger, especially the Preciado bout. Preciado was wrestling at 182 pounds and normally wrestles at 170 pounds.

“The other guy had weight and the kid was bigger. Abe has got to step up the tenacity a little bit. Him and Corrow have been practicing together since last spring and we are going to separate them. The two are very technical and I say there is a time and place where you just have to hammer somebody. That is Pahrump style. They want to do technical stuff, that is good to know, but there is a time to just get after it. That is how I have always been,” Rieger said.

Joeseph Zarabozo was the only Trojans wrestler to wrestle a female last Thursday. When asked about the pressure to win he replied, “Honestly the fact I lost my first match, just made it that much harder. It does not matter if he is a girl or a dude. A wrestler is a wrestler. You don’t beat the girl, you beat the wrestler. I never have gone up against a girl before. That was my first time. She was tough on the bottom and she was pretty strong in her arms. She tried her best. She gets a lot of props for that.”

The Trojans practice all week due to testing and then travel to Bullhead City for two days of wrestling.