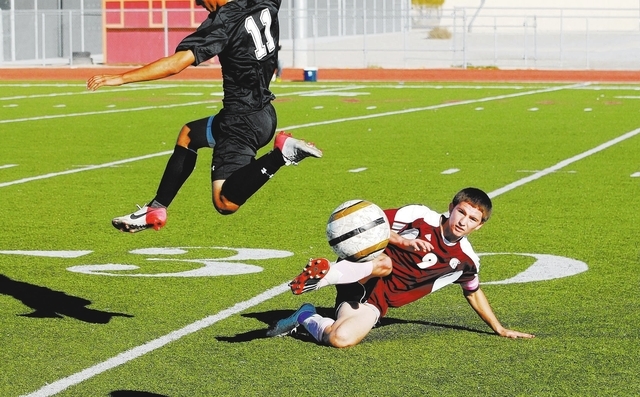 Men’s soccer has returned to Pahrump as a team to be reckoned with and it all started with first year coach, Don Boulden. The Trojans may not be headed out to the playoffs this year, but they can go out with their heads held high and say they gave it their best shot.

Faith Lutheran always brings out the best in the Trojans men’s soccer team. Both teams went at it on Thursday afternoon for a matter of pride. The Trojans lost 3-1.

The Trojans had hoped to get some help from other teams to make the playoffs, but it was not to be. Pahrump did not help themselves either by losing to Western and Faith Lutheran. Both these teams were division leaders. Western finished the year tied with Clark for first place with both teams having 35 points. Mojave and Faith are tied for second place with both teams having 22 points.

Regardless of not having any playoff spot the Trojans truly had a hell of a better season than last year. The Team finally has found a coach they can relate to, a coach who enjoys coaching and plans on building a good program.

Boulden has made a point that he was here to stay for a bit. He gave the team three more wins than last year and beat the second place team, Faith, at least once. He also brought with him respect and taught the team to respect each other. The attitude of the team has completely changed.

Boulden said he got results from the team by teaching them some new principles. Here are some of the important ones he shared:

A Champion Athlete: Mind – Practice a positive attitude, Heart – Determine your will to win, Body – Devote your strength to dominate your opponent, Soul- Focus your character to overcome opposition, Spirit – Believe to achieve. Love your sport.(By: Coach Don Boulden 8/17/13)

Earlier in the year Nick Nelson said he believed the team had a change of heart and much of it was because of what the new coach was teaching.

Last year’s team had a lot of in-fighting, which was not apparent this year. The team was more unified and the outcome was a better experience for the team as whole Nelson had said.

The Trojans have a young team and lose only five seniors this year. There should be nine players returning so look for a strong team next year.

When asked if he would return next year for another season Boulden replied, “My intention is to take the current freshmen class to its senior year and then re-evaluate then. Four years is a long time, but that’s my goal.”