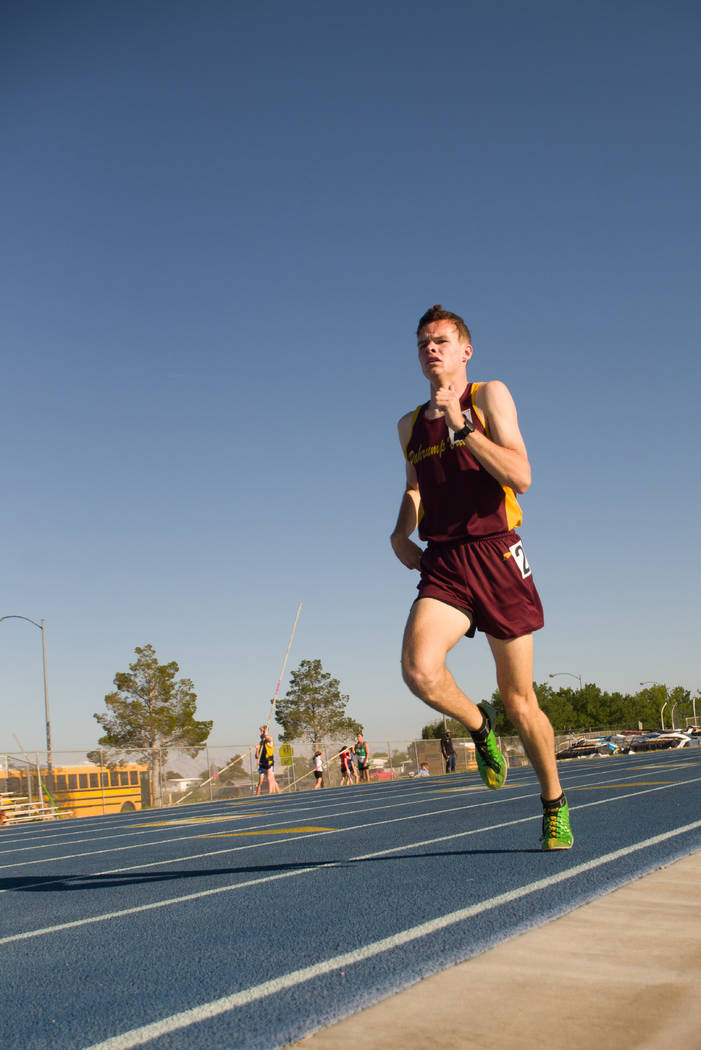 Skylar Stephens/Special to the Pahrump Valley Times Bryce Odegard is seen at the regional meet. Odegard came home with three state medals. He got a second in the 800-meter run, a second in the 1,600 and a fourth in the 3,200.

The Trojans boys track team came close to winning the Class 3A Nevada Track and Field Championships at Foothill High School on May 19-20.

The boys finished in third out of 19 schools, with 59 points. Sunrise Mountain won state (70) and Mojave was in second (64).

The boys lost the state title only by 11 points. It was close due to the efforts of Bryce Odegard, who had medal performances in three events.

Rieger said it would only take a first place in another event to give the Trojans 10 points. That could have come from the jumpers or the throwers. The jumpers gave the Trojans 22 points to take the regionals.

“Jeremy (Albertson) got second, but I think at state, we didn’t throw our best,” Rieger said.

Odegard had his hands full with senior Jimenez of Sunrise Mountain High School, who was Odegard’s competition in all three of Odegard’s events.

Odegard had a personal best in the 3,200 event, which he felt was his best performance of the meet.

“Even though I got a fourth-place medal in this event, I really felt this was my best event of the meet because I got a personal best,” Odegard said.

During the 3,200, Jimenez gained a small lead, and it just kept growing. Odegard started in third place and fell back to fourth, where he finished. Jimenez had about a 100-meter lead by the end of the race and broke a 27-year-old state record, finishing with a 9:35.32 time.

In the 800, Jimenez came in with a 1:57.56 and Odegard a 2:03.20. Jimenez was the definite favorite in that race and showed it coming out with a strong early lead that he never relinquished. He had a four-or-five-length lead going into the last turn and that’s when Jimenez saved some effort and turned it on, which was too much for Odegard. Odegard did finish with a season record in that event.

In the 1,600, Odegard had the second best time of 4:38.06 going into the meet and Jimenez had the best time of 4:22.83. Right from the start, Jimenez got off to a huge lead. Odegard was in second after the first lap and then fell back to fourth after the second lap. Jimenez increased his lead on the third lap to a 200-meter lead.

“Going in, I wanted to compete,” Odegard said. “I fell back a ways and I decided it was impossible to catch up with him and it became a race for second place.”

Odegard took over second place after the third lap and was able to hold that position in the fourth lap.

Odegard had nothing but praise for Jimenez who won with a 4:23.21.