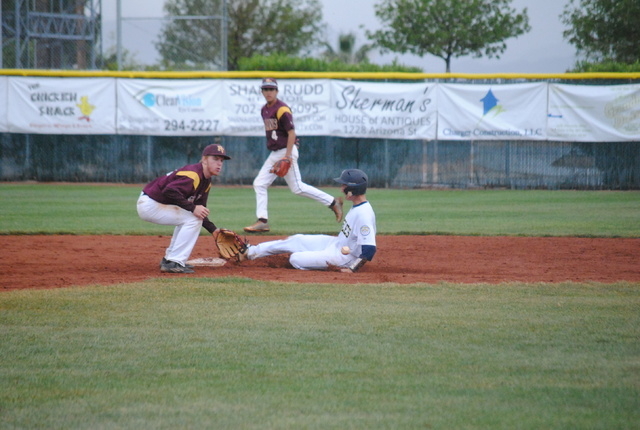 The Trojans baseball team took a two-game winning streak to Boulder City on Saturday but failed to get their third win, losing to the host Eagles, 10-0, in non-league play.

The losing pitcher was Josh Ferrer, who pitched 3.2 innings. He gave up six hits and nine runs.

The Trojans had just three hits against solid pitching by the Eagles.

Going into Boulder City, the Trojans (8-10 overall, 3-3 Sunset League) had just come from behind in dramatic fashion on Thursday, beating Mojave at home in the seventh, 4-3. Pahrump was losing to Mojave 3-1 in the last inning. Garret Lucas drove in the tying run and then Willie Lucas, his brother, drove in the winning run with a bases-loaded single.

“We did not play well against Mojave, but did just enough in the last inning to squeak by,” he said. “Right now, we don’t play consistent baseball. We play well against good teams, but play down to bad teams.”

He added that his team lacked focus against the Rattlers.

“This almost resulted in a loss for us,” Hayes said.

The coach said the bats went silent against Boulder City, who is the Sunrise League division leader.

“We showed our inconsistencies again in the Boulder City game,” he said. “We struggled at the plate with our approach and our pitchers had trouble throwing strikes (eight walks). We need to play better against Faith Lutheran to give ourself a chance.”

Pahrump comes home for two games. One on Thursday at 3:30 p.m. for a game against Western (1-9, 0-6) and then a Friday non-league game against Sunrise Mountain (2-10, 0-7) also at 3:30 p.m. Both teams are cellar teams, but the Trojans can’t afford to look by Western if they want to surpass Clark (8-9, 3-3). Clark and Pahrump are tied for fourth, but in a tie Clark would be ahead because they beat the Trojans earlier this year.