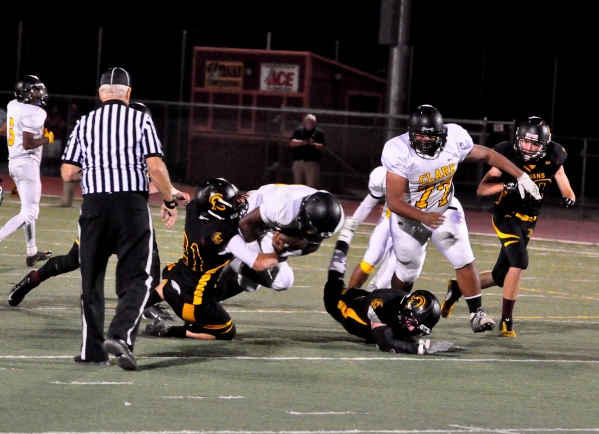 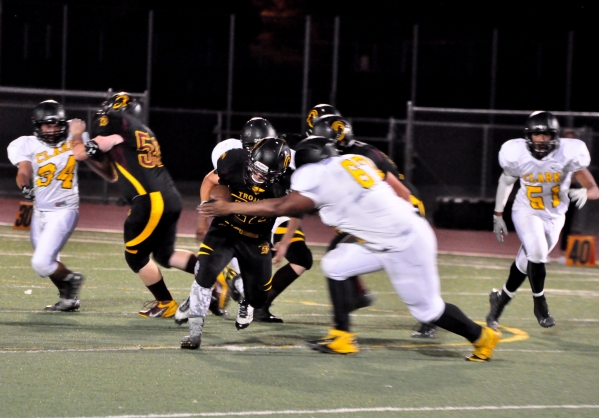 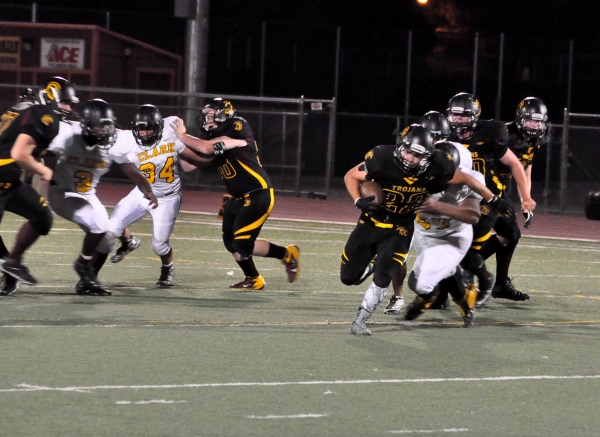 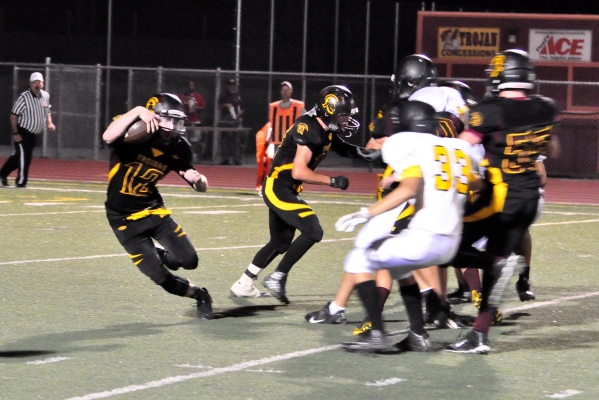 It was laundry day at the Trojans football stadium during the Clark game last Friday. Every yellow flag that the referees had was thrown all over the field to the dismay of Clark to the tune of no fewer than 25 penalties. During the game, there were so many penalties that it was extended by a whole hour in the 36-12 defeat of Clark (2-3 overall, 0-3 Sunset League) by the Trojans (3-2, 2-1).

This league win makes the game at Cheyenne (3-2, 2-1) this week for the Trojans that much more important. Pahrump has a chance to separate themselves from the pack of Mojave, Spring Valley and Cheyenne, who all have the same league record. Faith Lutheran is alone at 3-0.

The Trojans came into the Clark game wanting to accomplish three things. First, drive the ball down the field and finish their drives; the second goal was to have the defense stop a fast running team and third was to throw vertical passes down the field for big yards. Pahrump successfully completed all three goals.

In the first drive, Pahrump marched down the field and accomplished the first goal. They finished their drive, which resulted with Pahrump on top early, 7-0.

In that drive, the Trojans were forced to punt, but Clark roughed the kicker, giving the ball back. Senior quarterback TJ Milk then drove the ball into the Clark red zone and on third and long, completed a pass in the end zone for the first TD.

Clark, because of all the penalties, had a terrible time putting points on the board, but this was also because the Trojans’ defense came after Clark despite their speed and stopped Clark throughout the night.

Trojans coach Adam Gent said it was about following the game plan.

“Rieger (defensive coordinator) told the boys what to do and the defense followed the scheme,” Gent said. “Clark is well coached and saw our 4-3 front, and they made adjustments. They are fast and have good athletes and they blocked our defense well. They had a big offensive front.

Our boys I am proud of. They are very coachable and they did their assignments. We had to keep making adjustments to what the team was running and they did that well.”

Clark was able to score at the end of the first quarter, but after that the Trojans blanked them for the rest of the half.

The Trojans’ second series was heavily penalized with most of the penalties again coming from Clark. Pahrump gave up the ball on Clark’s 28-yard line, but Clark ended up fumbling the ball on third and 39 with the Trojans recovering the ball in the red zone. On second down, Devlin Dillon ran the ball into the end zone from the 2-yard line for the second score.

In the last three minutes of the half the Trojans stopped Clark again with a sack and ended up getting a field goal to end the half with the score 17-6 Trojans. In that series, Pahrump had two more good vertical passes down the field to get within field goal range.

Trojans kicker Joe Sladek was nearly perfect on the night, missing only one point after. The kicker said when it came to making field goals it was a process.

“To make the field goal I have to focus on the kick,” Sladek said. “The times I missed I was focusing on the people around me and the times I made it I was just focused on the ball. During the game I approached it and it was like slow motion and very natural.”

Sladek says he learned to kick through eight years of soccer. His longest kick of the season is 68 yards and his longest field goal is 38.

His efforts kept the Chargers off balance with two kickoffs in the end zone for touchbacks. Since the Chargers are known for their speed, this kept them from running back kickoff returns.

At the start of the second half, the Trojans stopped the Chargers on their first series and then Aaron Fuentes scored on a 60-yard sweep to the outside to make it 23-6.

“On my touchdown it was a sweep to the left,” Fuentes said. “When I got past the corner I knew it would be a touchdown. I got a great block from Tommy and I knew I was free coasting it from there.”

To start the fourth quarter the Trojans marched down the field eating seven minutes on the clock in the fourth and scored on a QB keeper by Milk to make it 30-12.

Clark was stopped twice more in the final minutes of the fourth quarter. On Clark’s first series in the fourth, Fuentes recovered a fumble and ran the ball down the field for the last Pahrump touchdown.

“I saw the guy dropped the ball and I scooped the ball,” Fuentes said. “I was gassing and I am not going to lie to you, I almost got tackled.”

In the last series Clark had, the Trojans intercepted the ball to end the game.

Trojans coach Adam Gent was pleased with his team’s performance.

Gent told his team after the game that the win was a great win.

“When we do things right, we are a good team,” he said. “You have to be committed to getting better every week.”

The team had improved since the last home game against Mojave. The Trojans were able to take the ball down the field and capitalize on Clark’s mistakes and finish their drives.

“We are building and I think we are getting better every game,” he said.

The Trojans will have to do just that to beat Cheyenne in a tough road game this Friday.