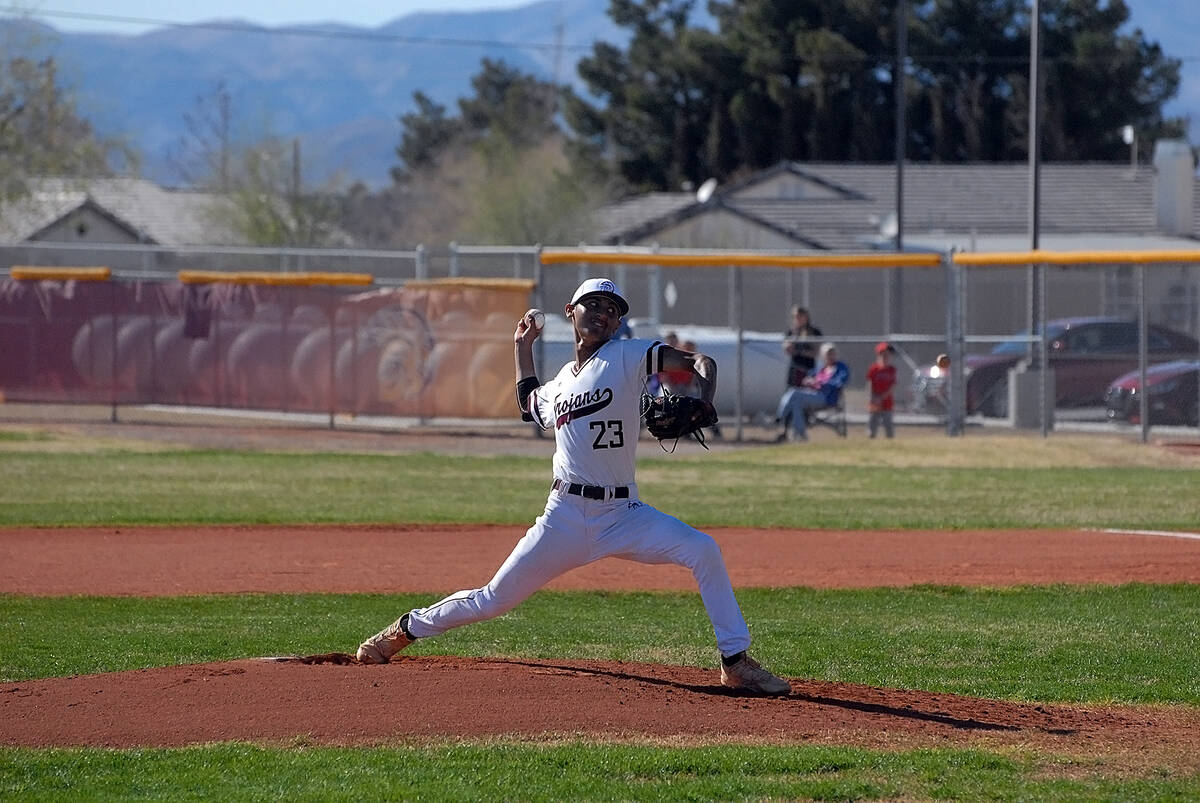 Horace Langford Jr./Pahrump Valley Times Trojan pitcher Fidel Betancourt (23) on the mound for the Trojans delivering a pitch during their 10-0 win over the Western Warriors on Tuesday, March 22, 2022. 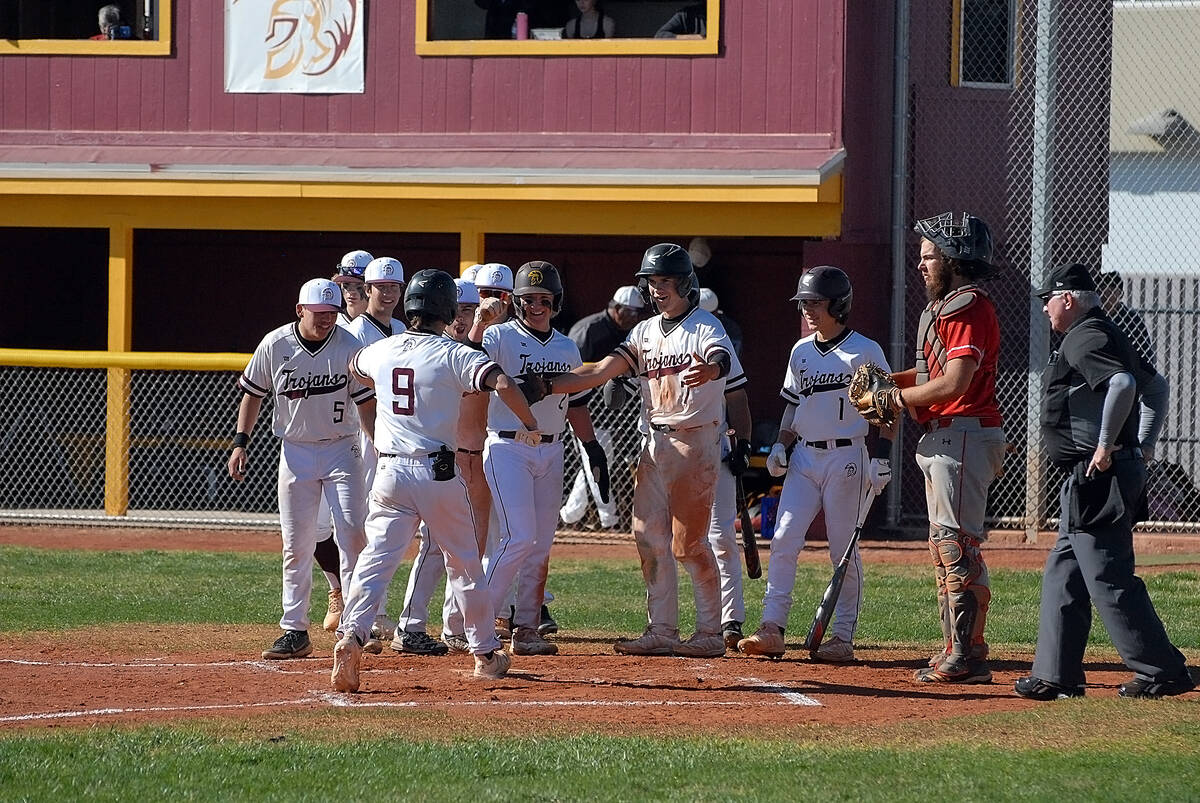 Horace Langford Jr./Pahrump Valley Times Colby Tiller (9) reaching home plate to celebrate with his teammates following his 3-run homerun in the second inning of Tuesday's win against the Western Warriors. 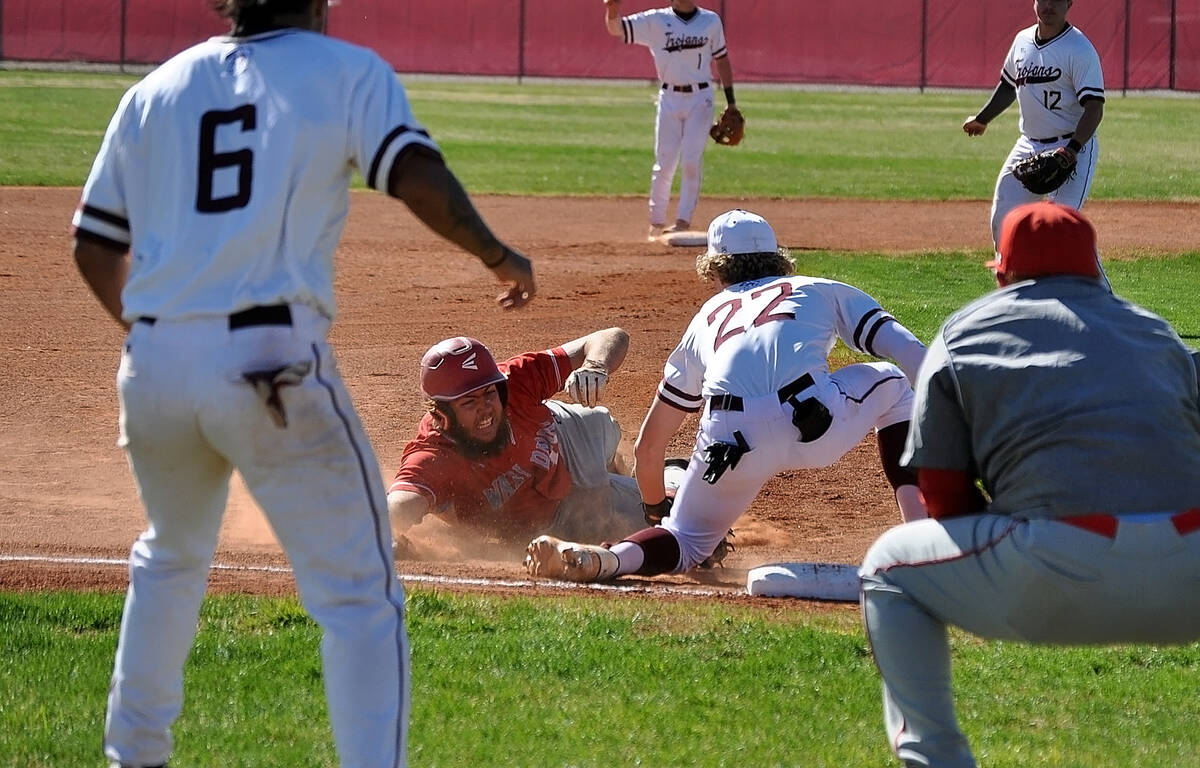 The Pahrump Valley baseball team defeated the Western Warriors with ease on Tuesday afternoon by a score of 10-0.

Fidel Betancourt was lights-out for the Trojans on the mound. He pitched a complete game, going all five innings while allowing just three hits and striking out 10 batters.

This was one of the best pitching performances for the Trojans that they’ve had so far this young season.

Betancourt didn’t just provide for his team on the mound, he also did it in the batter’s box as well.

Despite going just 1-for-3 on the day, Betancourt’s lone hit was a deep shot that ended in a triple. He would come in to score on a hit by Henry Amaya later in the inning to add a run for the Trojans.

Senior catcher Colby Tillery had his best offensive game of the season. He went 2-for-3 at the plate with a three-run home run and a total of five runs batted in.

His second inning home run was part of a six-run inning for the Trojan offense.

Junior Kyle McDaniel went 2-for-2 at the plate. He finished with two singles and he reached on a throwing error by the Warriors. McDaniels, along with James Metscher and Zack Cuellar, were the only Trojans that scored twice in the game.

Tillery’s fourth-inning 2-run single gave the Trojans their 10-run lead. Because the Warriors weren’t able to score a run in their half of the fifth inning, the Trojans won by the run rule.

This is their second consecutive win by the run rule. They defeated Camp Verde the same way in the Route 66 Classic tournament over the weekend.

As you’re reading this, the Trojans played another game on Thursday afternoon against the Eldorado Sundevils. You can check MaxPreps.com for the outcome of that game.

Pahrump Valley’s next game will be on Friday, March 25, when they travel to Mesquite to take on the Bulldogs of Virgin Valley.

The Trojans have won eight of the last ten games against the Bulldogs going back to the 2016-17 season, including two wins in last season’s regional playoffs.