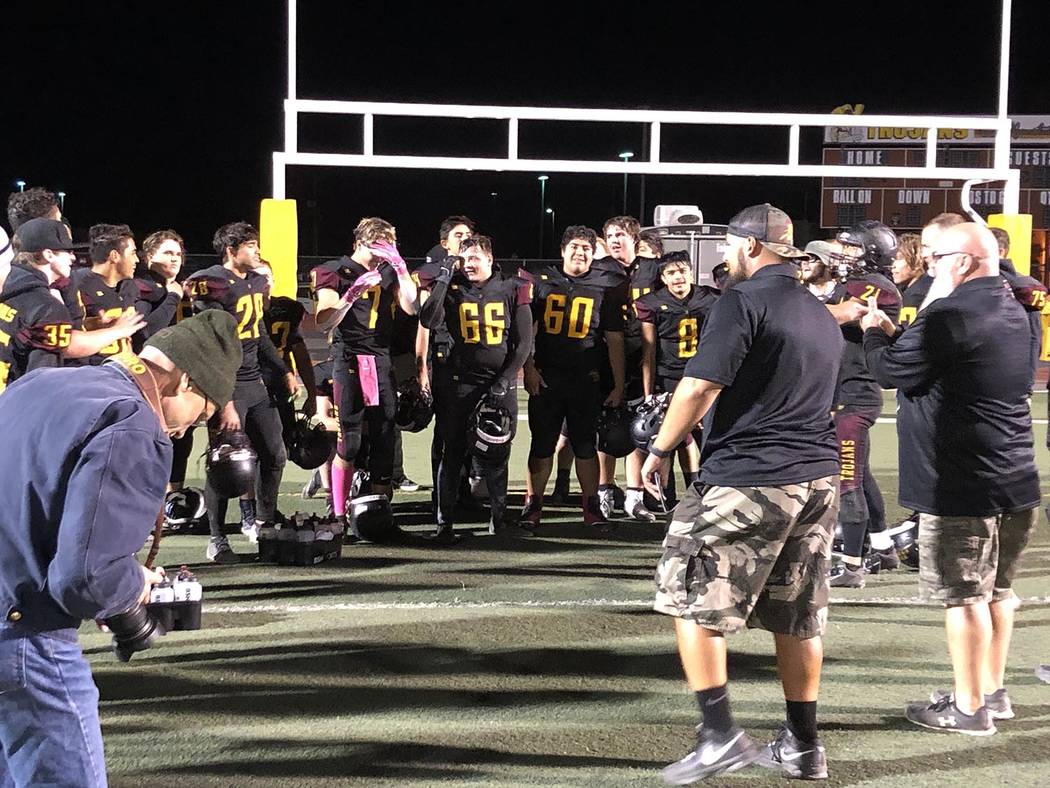 Tom Rysinski/Pahrump Valley Times Pahrump Valley High School football players gather in the end zone for the shortest postgame meeting of the year, as coach Joe Clayton told them to go enjoy their 32-27 win over Del Sol on Friday night at Trojan Field. 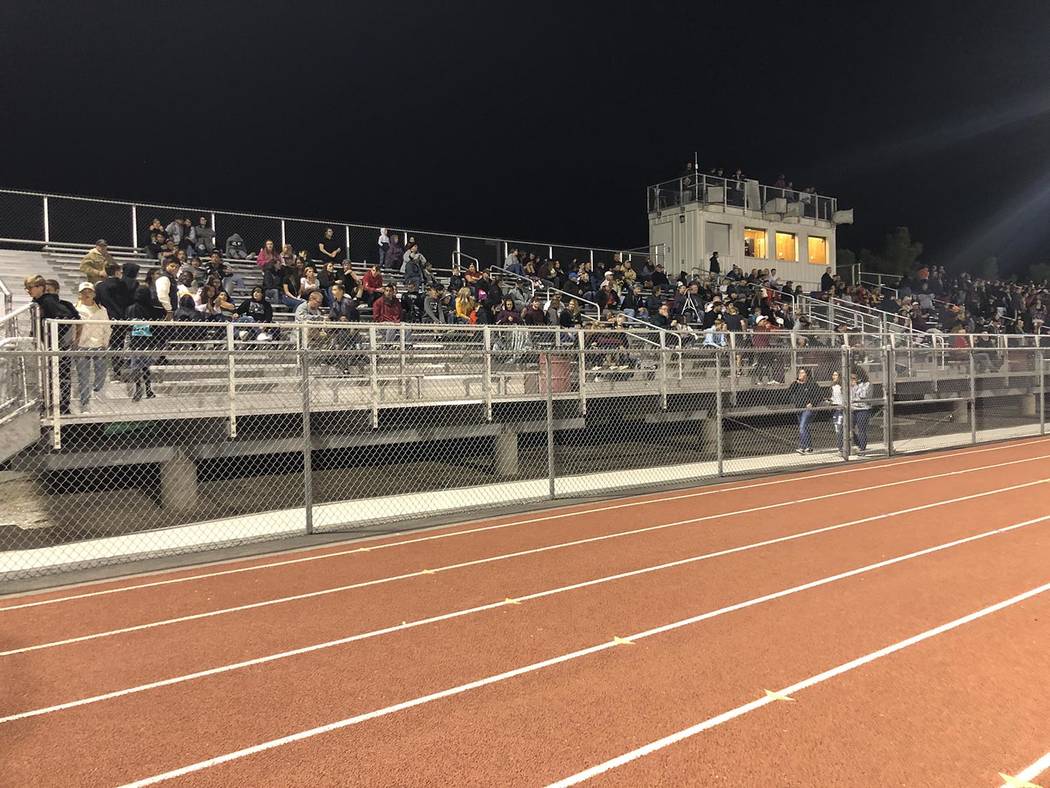 Tom Rysinski/Pahrump Valley Times Chilly temperatures might have kept the crowd down Friday night, but those who braved the metal bleachers on a cold night enjoyed seeing Pahrump Valley rally for a 32-27 win over Del Sol in a key Sunset League game. 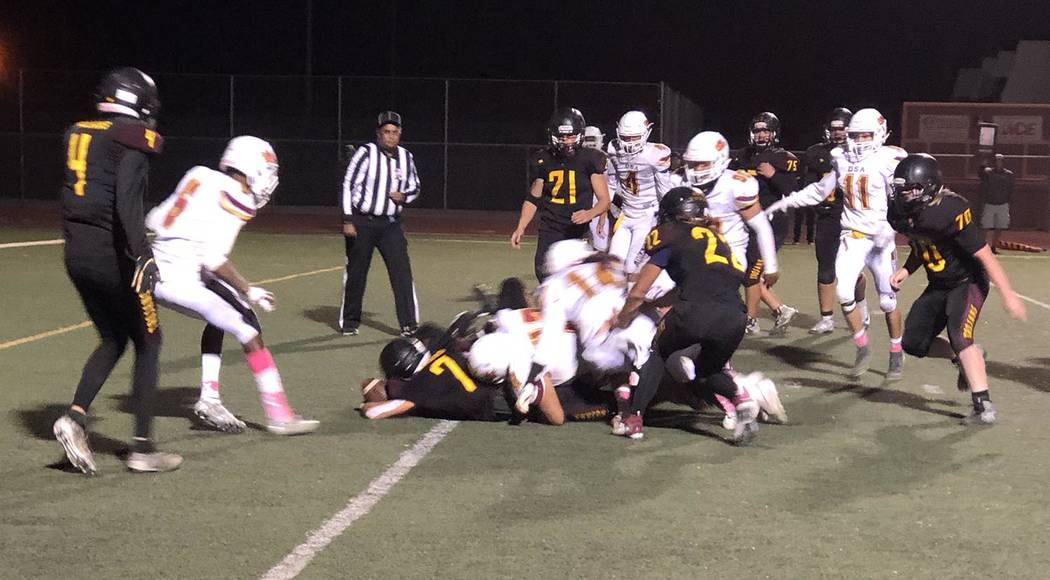 The Trojans had scored on the first play of the fourth quarter to pull within 21-16 Friday night against Del Sol, and on the very next play from scrimmage, Dragons quarterback Damani Wilks, who had run over, around and through the Trojans for 140 yards during the first half, was stacked up for a 1-yard loss. As the players began to remove themselves from the pile, suddenly an official signaled first down for the Trojans as junior linebacker Fabian Soriano held the ball aloft.

The Pahrump Valley sideline, sensing a major momentum shift, erupted in celebration without ever seeing what triggered it.

“Nobody did,” Trojans coach Joe Clayton said. “Those guys didn’t even see it up top, either. The only thing I can think of is there was a huge pile underneath (Wilks), so when Fabian came in and sacked him he didn’t hit the field right away. He was on top of bodies. So I think Fabian just took it from him before his body hit the field.”

The only thing that mattered is that the Trojans had the ball, and they knew just what to do with it. They marched 35 yards on six plays, with Dylan Wright scoring from 6 yards out and Tony Margiotta running in the 2-point conversion as the Trojans took their first lead, 24-21.

The Trojans converted an onside kick on the game’s next play, cashed that in for another Wright touchdown and Margiotta conversion and went on to a critical 32-27 victory over the Dragons.

The differences between the two halves couldn’t have been more stark. After his dominant first half, Wilks inexplicably rushed just four times after the intermission, totaling 13 yards. And whoever had the ball for the Dragons during the second half found himself against an inspired Trojans defense.

“Honestly it was just wrap up, eyes to the thighs and no first downs for them,” Margiotta said. “We got it done in the second half.”

“In the first half everyone — everyone — as a team we were not tackling well,” Wright added. “But in the second half we definitely stepped up, improved our tackling and put helmets on all of their offensive players.”

The slow start might have been at least partially because of pressure. After losing their league opener to Cheyenne, everyone in maroon and gold knew how vital beating Del Sol was going to be.

“I feel as though we were antsy to get it on, and we were all tackling high and not wrapping up,” said sophomore quarterback Roman Roberts.

Things couldn’t have started much worse for the Trojans. They went three-and-out on their opening drive, and Roberts threw an interception on the second play of their second possession. In between, the Dragons went 63 yards on eight plays, with senior Sheik Fofanah scoring on a 15-yard run.

The next score was almost all Wilks. After the Dragons stopped the Trojans on fourth-and-goal at the 3-yard line, they made short work of covering 97 yards, with Wilks putting together runs of 15, 29, 13 and 33 yards for a 14-0 lead.

Junior Jalen Denton then sparked the Trojans’ first scoring drive, racing left for 34 yards to give the home team a first down at the Del Sol 29. It took seven more plays, but Margiotta was not stopped on fourth down this time, and Wright hit Kody Peugh on the conversion to cut the lead to 14-8.

Things got worse before they got better for Pahrump Valley, but the fumble and the recovered onside kick changed everything. More importantly, the Trojans cashed in each time, and suddenly the 1-5 team that went into the game was in the driver’s seat for a home playoff game.

But even after taking a 32-21 lead, it wasn’t easy for the Trojans. Wilks, known more for his legs than his arm, caught fire after the Dragons took over on their own 45. He hit Nati Asfaw for 32 yards on a screen, found Vonta Holloway for 17 yards and then went back to Asfaw for a 10-yard touchdown. The drive covered 55 yards in 42 seconds, and when the conversion pass failed the Trojans led 32-27.

When Delker fielded the onside kick — holding on despite getting absolutely hammered — it appeared as if the game was over. But Del Sol had timeouts and used them after first- and second-down plays combined for just 3 yards. A false start and a 9-yard Margiotta run on a pitch right left the Trojans with a four-and-3, but Fofanah stopped Margiotta cold for no gain to put the Dragons 44 yards from victory with 1:40 still on the clock.

Wilks hit Maalik Flowers for 14 yards, then spun his way for a 10-yard gain to the Pahrump Valley 32. But then Wilks, so calm most of the game, went scrambling on the next play, undecided whether to run or pass. When he finally decided to pass, it was a weak floater headed to nobody in particular, and Wright leaped into the air, pulled it down and wrapped up the win that evened the Trojans’ league record at 1-1.

“It was extremely important,” said Wright, who finished with 47 yards rushing and 2 touchdowns, the Trojans’ only reception for 16 yards, three kickoff returns for 52 yards, a 40-yard punt and the interception. “This was a do-or-die situation. We lost our league opener to Cheyenne, and we knew it was going to be tough to get back to the number-one spot. With this win, we can still tie for first place.”

They will need help with that, but they control their own destiny for the No. 2 spot in the Sunset with Western and Valley left to play.

“We just did everything we needed to do,” said Margiotta, who carried 27 times for 128 yards, scoring twice and converting three 2-point runs. “We blocked hard and drove down the field on them.

“I feel that we’re going to get far this season. If we play like we did tonight, we will get the job done.”