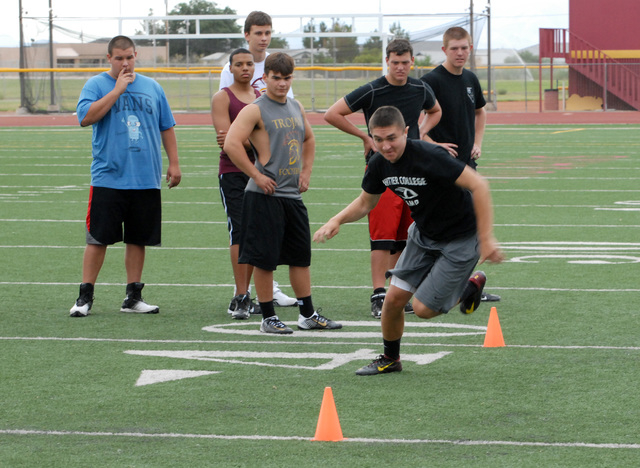 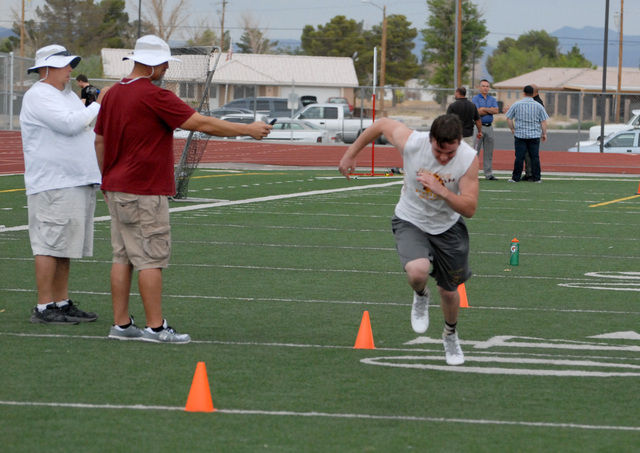 Last year the Trojans were on the verge of going to the playoffs two straight years in a row. The team finished 3-6 overall and had a 2-3 league record. A triple overtime to Cheyenne cost them a playoff bid.

For the second year in a row, the Trojans had a successful summer camp at Southern Utah University. Trojans Coach Joe Clayton is excited by what he saw at camp and talked to the PVT about the summer and the upcoming season. The Trojans added one new coach to their staff, Mark Duvall. He works for Valley Electric. He will help with the lineman coach and he will be the freshman coach.

Q: Coach, your team this year is giving up an age-old tradition of two-a-day practices because of the change in the district schedule, which has all the Nye County schools starting on Aug. 11. This is the week where the Clark County schools will be starting their heat acclamation period and putting on the pads. What will your team be doing?

A: We don’t know yet. I am not sure how it is going to work. We are at a disadvantage now because we have to follow the heat acclamation period and all that puts us at a huge disadvantage because we will be at school at that time.

To be honest with you, I have not come up with a solution yet and we can’t just do things early. We will have to be creative on how we do this. One of our only options is having a long night practice. The problem is the heat. We really don’t want to be practicing right after school. We are not really too concerned with time because we are running the same offense and defense. Our older kids have a good grasp of what we do. It’s not like we are reteaching anything. We are reinforcing everything and just getting better at what we do. We are just going to have to play around and see what works best because this is new to all of us.

Q: Are you happy with your new schedule? You will play some of the teams you used to play in the old 4-A and does this concern you?

A: I honestly feel this is the best schedule we have had in quite some time. We simply are not playing powerhouses like Moapa and Desert Pines to start. This year we have teams that we can beat. We are now looking to get some confidence going into league. The two teams coming into our league are not powerhouses either. Sierra Vista and Spring Valley are the two new teams in the league (Spring Valley 3-7, Sierra Vista 2-7). Both of those teams kind of struggled a little bit last year and were about where we were last year. They were both on the bottom side of their leagues. We have some confidence and we are looking forward to playing them.

Q: Are there any major changes in the offense and defense?

A: Offense: The Jet Sweep offense is still in. We have nine of our starters on offense from last year and we have eight of our starting defenders returning. I think we did really well at camp this year. We also competed against some of the bigger schools running the same stuff. We are just going to keep doing what we do.

Q: Keenan Harris contributed last year to the offense and is really quick. How will you keep him healthy?

A: He has been injured, we know that he has had issues with his hamstring in track. Our focus is that Coach Rieger and Colucci are really making sure he stretches the hamstring and is doing extra work to prevent further injuries. It’s a concern because he is a go-to guy on the offense.

Q: Last year you had Scott Maughan, who ran for over 700 yards. Who will replace him?

A: We have Tommy Gascoigne, Sam Tuscnak and BJ Apollo who will all be going out for fullback. Apollo moved in from Liberty High School. Sam did grab a lot of reps at camp and did really well. At this point, we are looking at him to start and go both ways. One thing I am happy about as opposed to past years is, we finally got some numbers on the varsity level. We truly feel that the Cheyenne game we lost in triple overtime, we lost because we were gassed out with our guys going both ways. We truly feel our numbers will be a strength for us this year. We won’t have to go with the same guys on both sides of the ball. So, Sam will not necessarily get all the reps like Scotty did last year. He is obviously one of our top defenders and we want to keep him rested.

Q: What else can you say about your team on offense?

A: We are absolutely big up front. From both tight ends, guards and tackles, we are experienced and big. With Jeremiah England and Deon Estes being our smallest guys from 225 to 245. Our tackles are at 260 and we average 245 across the front. We definitely competed with the big boys at camp. We were able to pound the ball to Sam. On top of that, we were able to spread them out and throw to our quick tight ends. This week the SUU had the smaller schools at camp. This week does not work for us so we always go to the first week with all the bigger schools. We actually get more out of that. Last year we competed and we just felt we could compete more this year. We were happy with our offense and we scored on everyone we played against. It was good to move the ball against some of the bigger schools. The biggest guy is Adrian Hill, who had some grade problems last year. He is 6 foot 3 inches tall, 295 pounds and playing tackle. He got a lot of reps at camp and we still have a ways to go with him, but he should be ready to go. Jace is around 265 pounds along with Jeremy Coates. Jax will be 225 pounds and Tyler Baumgarten at 230.

Q: Are you pleased with your pass blocking and will this open up your passing game this year?

A: We have very limited pass blocking schemes. We also have very little run blocking schemes. The trick is to perfect these and because we don’t have such a huge play book these guys are perfecting what they do. We are very pleased. We just got to get the ball in TJ’s hands as quick as possible. We definitely have the receivers and the quarterback with the good arm that can spread them out. Then as soon as we spread them out we bring them back in and pound the ball. We just go back and forth.

Q: Defensively some felt the Trojans were weak on the pass defense. Will this be something you are working on this season?

A: The defensive backs will be an issue. It was an issue at camp. Camp is for determining the best personnel to put in those areas. We have a kid from Reno that we used at safety so we are still experimenting with that and it’s early. It definitely is a spot where we are thin at. We are also thin at linebacker.

Q: Are you not in better shape at linebacker?

A: Yes, we lost Scotty at linebacker, but having an all-conference linebacker like Sam there to anchor the linebackers is a good thing. We are still kind of thin. Right now we have just four linebackers for that 4-3. I really should not say weak, I should say it is not our strength.

Q: Who will replace Chad Uyeno at kicker?

A: Danny Foss will replace him. He was a JV kicker. He will be our kicker and punter. The kid is really tall and lanky. He got some reps at SUU and was hitting 40-yard field goals at SUU. At this point, he could kick the ball and get touchbacks on a regular basis. Right now he can kick and get it inside the five yard line. If he could get a little further, we can start our defense on the 20. He can punt and kick. He is an ex-soccer player.