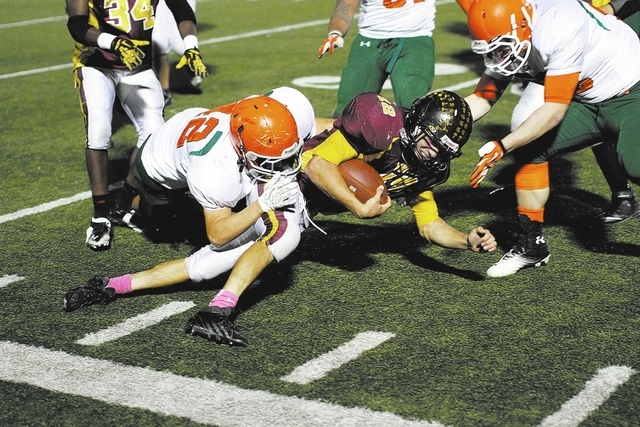 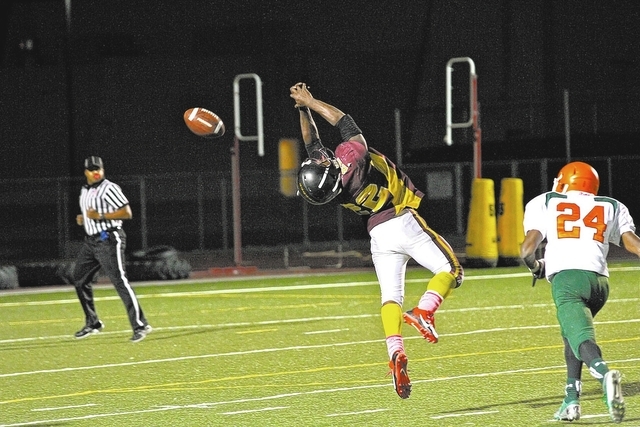 The Trojans football team played their hearts out for the last remaining playoff spot against the Mojave Rattlers, but just could not get their offensive game off the ground and lost 47-0.

At the half, the game was 21-0 and Pahrump had squandered many chances in the first half to get their offense going. They had several three and out series and could never really establish their run game.

The Trojans offense waited until the second half to wake up. In their first drive of the second half, the Trojans looked as if they would make a comeback. They had three first downs in a row and marched the ball down to the red zone in Trojans fashion, but they sputtered. Troy gave the ball up on downs. After that drive, the Trojans never again came close to scoring.

The Trojans gave up three touchdowns in the first half, two more in the third and 14 points in the fourth quarter.

With the victory over the Trojans Mojave finishes in second place and will move on to the playoffs. Mojave Coach Joe Delgado felt his team was ready for Pahrump.

“The team faced a little adversity this week and pulled together and played not flawless ball but played just enough to get us where we need to be. We were able to contain the double wing with our speed on defense. We have a good group of backs and I made sure we spread the ball around to make them happy,” Delgado said.

The loss for the Trojans meant they had a 2-3 win loss record in league play, which put them in complex tie with Cheyenne and Clark. Pahrump coaches burned the midnight oil along with Athletic Administrator Chris Brockman and Principal Max Buffi trying to figure out the playoff picture for the Trojans over a midnight snack at the Gold Nugget hours after the game. It finally took a call from Nevada Interscholastic Activities Association Assistant Director Donnie Nelson to finally set things straight.

According to the NIAA formula, with the loss to Mojave this means Clark earns the No. 3 and Cheyenne gets the No. 4 seed because Pahrump lost to Cheyenne in head-to-head competition.

Although Clark lost to Pahrump in head-to-head competition, because Pahrump’s victory was only by 3 points this was not enough to offset the Clark victory over Cheyenne on Thursday which was a 44-20 beating. The last game for Clark put them ahead of Pahrump in points and therefore Clark and Cheyenne go to the playoffs.

The Trojans may have ended their season with a big loss, and some would say this is just typical Trojans football, but if they were true Trojans fans they would have noticed some major changes.

For one the Trojans finished the season with a 3-6 record overall, an achievement which has not been matched since 2006 where they went 3-7 and 2005 when they went 3-6.

Although Trojans Coach Joe Clayton did not break all-time records in rushing for Pahrump, his team did bring back a very strong rushing game. They broke a record for most “rushing TDs single-season record” with 23.

The Trojans averaged 180-yards rushing per game and 79.4-yards per game passing. All this translated into many close games and exciting football for Trojans fans who can’t wait till next year. Clayton deserves some credit for rebuilding a team. He said last year it could take a while and he is making good on his promise by making progress.