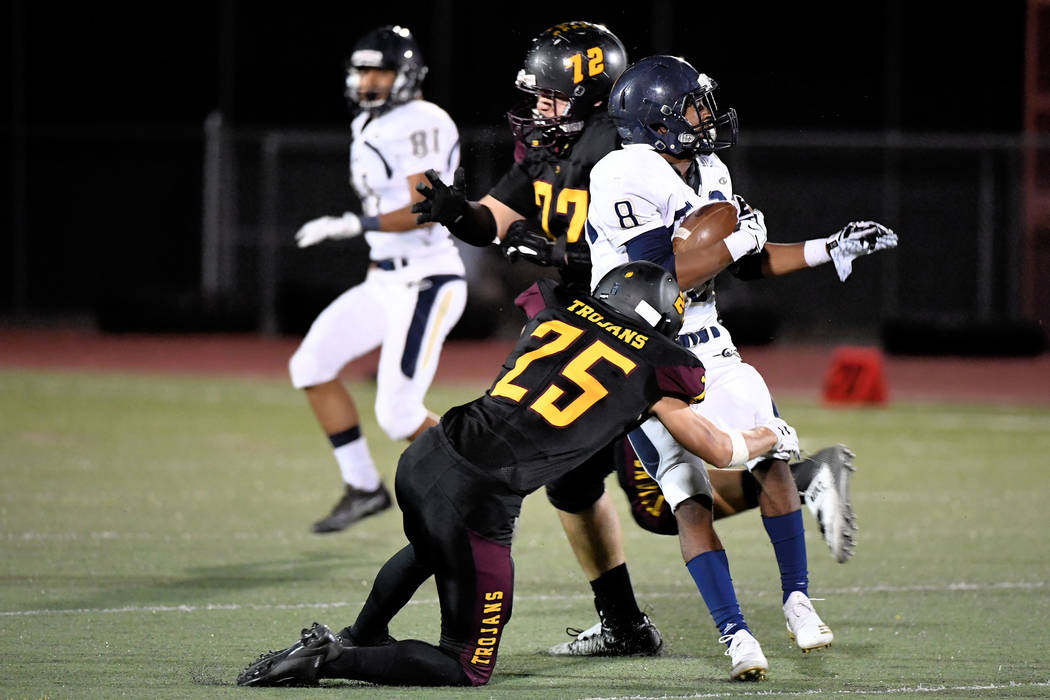 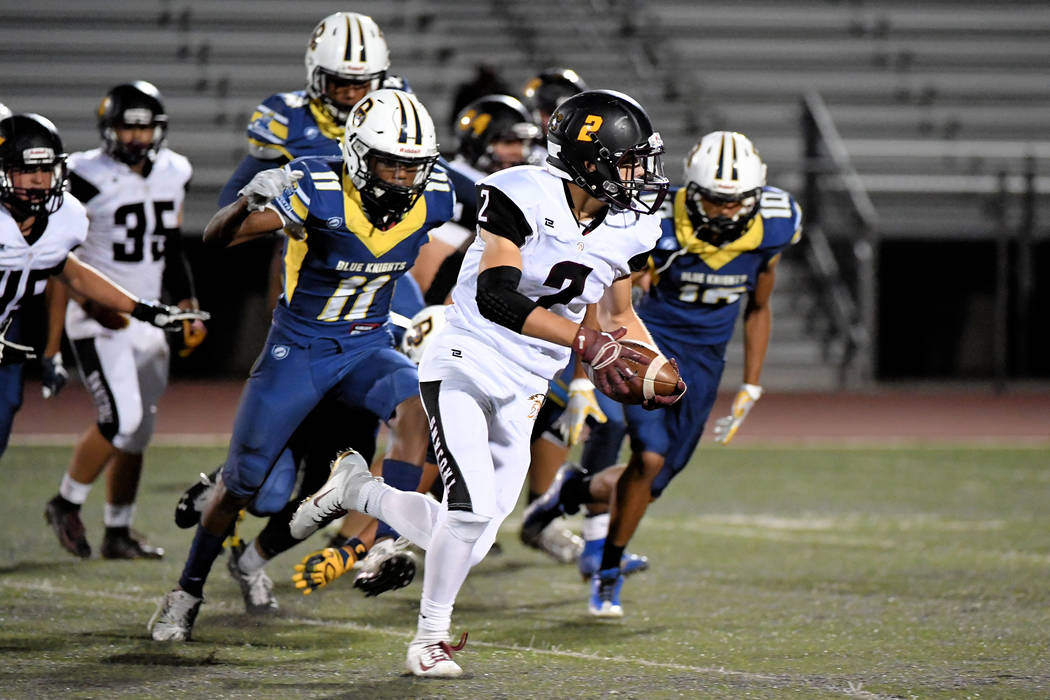 Peter Davis/Special to the Pahrump Valley Times Pahrump Valley's Joey Koenig finds running room to the outside during the Trojans' 48-25 win over Democracy Prep on Sept. 21 at Rancho High School in Las Vegas.

Regular readers of the print edition of the PV Times might recall a story from early summer, detailing what realignment meant for the Pahrump Valley High School football team. The Trojans went 2-3 in the Class 3A Sunset League last year, and all three teams that beat them were moved out of the league.

What moved in were a team up from 2A, a team sent down from 4A because of poor performance and Del Sol, which had one winning season in the past eight years. Even coach Joe Clayton said it seemed as if the stars were aligned for the Trojans.

Then, after the opener at Lowry — a disappointing loss fueled by five fumbles, although the Buckaroos are actually much improved over last year — it was noted in print that the game, while a soul-crushing loss, in the end meant very little. It wasn’t a league game, and it wasn’t against a team they would see in the regional playoffs. Don’t write it off exactly, but you almost could.

Now here we sit, with the Trojans over .500 overall at 4-3 and 3-0 in the Sunset, with the worst team in the league making the trip to Pahrump on Friday night. The woeful Western Warriors are 0-7, scoring a meager 26 points all season while surrendering — gulp! — 360. That’s an average game score of 51-4.

Then comes a trip to Valley, the team that was dropped from 4A this season, is a respectable 4-4, 2-1 in the Sunset, and can’t be overlooked. But this is a team that allowed 57 points to Cheyenne, 40 to Desert Oasis and 42 to Moapa Valley. Two of their wins are against Rancho and Western, two of the worst programs in the state.

The Sunset League title is sitting right there, waiting to be taken. Stay focused against Valley, stay awake against Western, and the Trojans will get a week off before their first playoff game.

But if you read the PV Times carefully, chances are you might have seen it coming. Just sayin’.

The defense does not rest

For much of the season, pass defense was a trouble spot for the Trojans. Clayton even said teams were seeing on film the difficulty they were having and throwing more than usual when they played Pahrump Valley.

The numbers bear that out. Check out the Trojans’ first six games. This will take a while, but it ends well.

In the opener, Lowry’s two quarterbacks combined to go 20 of 34 for 225 yards and four touchdowns. The improved Buckaroos are 5-3, but in their other seven games they have averaged less than 85 yards passing.

Virgin Valley (7-1) is having the best year in Class 3A South. In the Bulldogs’ two-point win over the Trojans, Meb Hollingshead completed 15 of 22 passes for 248 yards and two scores. In their other seven games, he is averaging 100 yards passing.

The Trojans routed Sunrise Mountain (2-5), but just to make the point, Miners quarterback Tyree Hayes went 14 of 23 for 222 yards. He averages six completions for 100.17 yards in their other six games.

Boulder City (4-3) was a frustrating loss for the Trojans, and even though Eagles running back Thorsten Balmer shredded the Pahrump Valley defense for 211 yards, quarterback Parker Reynolds also was 12 of 20 for 162 yards and two scores. In the other six games? Reynolds averages less than 110 yards on fewer than nine completions.

Democracy Prep (2-6) was an interesting case in that the Blue Knights marched up and down the field with ease in the first half and did little in the second. Micah Gayman didn’t have a great game, completing just 9 of 19 passes, but they were good for 221 yards. He averages less than 109 in their other seven games.

Cheyenne (6-2), much like Sunrise Mountain, was so thoroughly dominated that numbers really don’t matter. But the Desert Shields’ quarterback, Joshua Rose, threw for 164 yards and a touchdown despite averaging just more than 95 yards in their other seven games.

The Dragons (4-4) boasted — and still boast — Southern Nevada’s top passing attack, with Andre Nevarez throwing for 1,827 yards. Nobody would have been stunned if the Dragons put up big numbers against a Pahrump Valley defense that had allowed every quarterback it faced to exceed, usually by a solid margin, his average passing yards per game.

Note the word “had.”

Del Sol does not throw deep; the Dragons have compiled all those passing yards by throwing underneath and watching their speedy receivers chew up big yardage after the catches. But the Trojans locked down on those receivers and managed to get pressure on Nevarez, sacking him four times and forcing him out of the pocket several other times.

Nevarez threw for just 122 yards in Pahrump Valley’s come-from-behind 27-14 win, exactly half of his 244-yard average. That, folks, is winning football.

So Pahrump Valley does not throw as much as Del Sol. Or Army. Well, it seems that way, anyway. But week after week, the limited passing game has come up big for the Trojans.

“Another unbelievable example of how two huge pass plays that won the game for us,” Clayton said. “You couldn’t ask for two better deep balls.”

Not surprisingly, Koenig said the deep passing game is not something the Trojans spend much time on during practice.

“We really don’t practice it that much,” he said after the win. “Dylan and I just have that connection. Our O-line is just great at pass blocking. They give a lot of time.”

The Trojans’ jet offense has been piling up yardage most of the year, but it didn’t have its best night against the Dragons. Clayton had high praise for Del Sol’s defensive ends, saying they made it hard for ball carriers to get to the outside. On one of the few plays the Trojans succeeded, Casey Flennory scampered 69 yards for a touchdown.

Take away that play and Pahrump Valley rushed for just 236 yards on a whopping 67 carries, just 3.52 yards per carry.

Another strong second half

Clayton will tell you that the first goal of his offense is to chew up big chunks of yardage while running off big chunks of time off of the clock, keeping the ball away from the more explosive offenses many of the Las Vegas teams have. But the second purpose is simply to wear down opposing defenses, tiring and frustrating them as the game goes on.

Well, for the second time in three weeks, the Trojans were locked in a tight game at halftime and won the game in the second half. Against Democracy Prep, the score was 32-25 Trojans, but don’t be fooled: The difference was conversions; each team scored four touchdowns, but Pahrump Valley succeeded on four 2-point conversions while Democracy Prep managed just one PAT.

Del Sol was a defensive battle in the first half, as the teams were tied 7-7 at halftime. At that point, the Trojans had 121 yards on 33 carries, while the Dragons had just 60 yards of offense. Del Sol started the second half strong, putting together a 61-yard touchdown drive to take a 14-7 lead.

From then on, it was all Trojans, as they ran 32 offensive plays the rest of the way to just 15 for the Dragons. Pahrump Valley racked up 296 yards in the second half and ran the final 5:24 off of the clock.