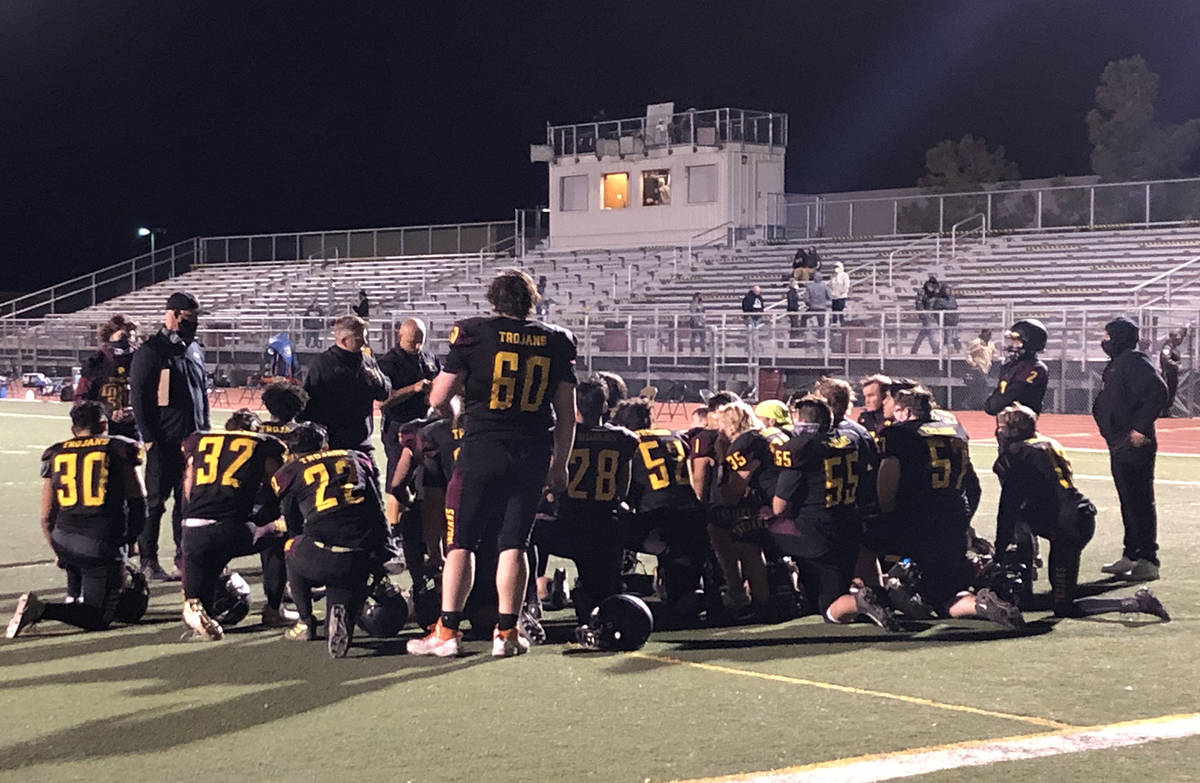 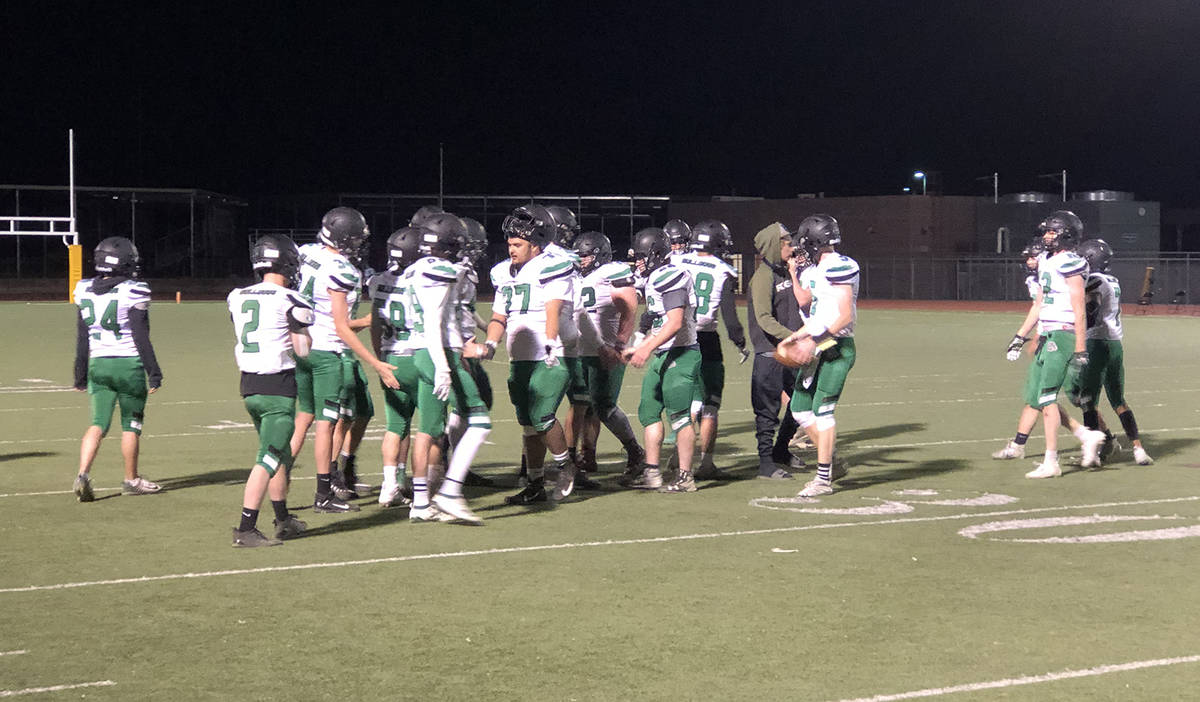 On the surface, Pahrump Valley’s 14-6 loss to Virgin Valley appears to be a continuation of both the Trojans’ opening loss and their series history with the Bulldogs.

After all, they had just completed 11 consecutive scoreless quarters of football before — thanks to a very short field created by two holding penalties and a weak Virgin Valley punt — finding the end zone after a 25-yard drive. Moreover, the victory gave the Bulldogs a 44-7 all-time record against the Trojans, including 25 consecutive wins.

For a school that is considered a rival, those numbers are downright crazy.

Those numbers reflect the fairly even game it was, and the fact that neither team managed 4 yards per carry reflects how physical the game was.

There’s no way to sugar-coat this: The Trojans were flat-out awful when it came to ball security. They fumbled on their first snap of the game and finished the first half with four fumbles on 15 snaps.

The first gave the Bulldogs the ball at the PV 22 just 3 minutes into the game. But the run defense stiffened, as three runs by Ethan “Peanut” Workman and a scramble by quarterback Will Barnum managed 9 yards, turning over the ball to the Trojans at their own 13. The Trojans fumbled another snap four plays later but Oscarson recovered the fumble for a 3-yard loss.

The third fumble was crucial, as the Trojans faced third-and-1 at the Virgin Valley 31 when they coughed up the ball. The Bulldogs looked as if they would make them pay for that one, moving 49 yards on five plays to set up a first down at the PV 24, but Henry Amaya picked off a Barnum pass inside the Trojans 20 and returned it to the 31.

But two plays later the Trojans fumbled another snap, giving the Bulldogs a golden opportunity at the Pahrump Valley 31. They didn’t waste this one, with Barnum hitting Benson Leavitt for 14 yards and Rafael Guzman for 15 to put the Bulldogs on the board with an 8-0 lead.

The last fumble was also critical, as the Trojans took the ball on their own 30 with 4:12 left in the third quarter and used six plays to reach the Virgin Valley 23. But on a first down play, another fumble halted progress, and while Andrew Avena recovered for the Trojans, the loss of 3 yards threw a wrench in the drive. After a run for no gain, Avena tried to find Rance Bill on third-and-13 and again on fourth-and-13 without success.

By coincidence, the Trojans almost fumbled again when Fabian Soriano — who led the Trojans with 55 yards rushing on 10 carries — lost the ball near the goal line, but the ball was ruled down at the 1. On the next play, Avena went up the middle for the Trojans’ first points of the season.

Before the season, Trojans coach Joe Clayton said that the running back position would be filled by committee, and if the first game is any indication, he meant what he said.

Seven Pahrump Valley ball carriers combined for 155 rushing yards, although some of their 40 carries were by quarterbacks who did not intend to run. Still, Avena carried 12 times — including sacks — for 23 yards, Soriano 10 times for 55 yards and Amaya eight times for 44 yards. Daniel Edghill had four rushes, Daniel Dilone two and Oscarson and Zack Cuellar were credited with one each.

Cuellar made the most of his carry, rambling for 15 yards, while of the more frequent ball carriers Amaya and Soriano each averaged 5.5 yards per carry.

The Trojans also employed multiple quarterbacks, with Avena completing 3 of 6 passes for 50 yards, Makoa Batongbacal, the opening-game starter, throwing once and fellow sophomore Scott Oscarson also getting in the game.

Yards, but no points

Field position was not a major factor in the game, as there was less than a 7-yard difference between the average starting field position of the teams. But some of the Trojans’ most productive possessions came when they were farthest from the Bulldogs’ end zone.

The Trojans ran 5:14 off the clock during the first quarter with an eight-play drive, but that one started at their own 13. They nearly ran another 5 minutes off the clock on their first possession of the second half, but that eight-play drive ended near midfield when Edghill had nowhere to go on a fourth-and-1 play. Pahrump Valley put together an 11-play drive that bridged the third and fourth quarters, using 5:07 and covering 44 yards before stalling at the Bulldogs’ 26, hampered by one of the fumbles.

Despite their average of 3.9 yards per carry, the Trojans broke off six runs of 10 yards or more and completed two passes of at least 20 yards.

Two of those passes came during a desperation drive at the end of the first half, when the Trojans with a little more than 4 minutes left before intermission.

The drive looked like a three-and-out, but Avena — after being stopped on third-and-4 — pulled a fake punt and motored 7 yards for a first down. A holding call hurt the Trojans, and as the clock wound down two keepers netted 8 yards, leaving the Trojans 69 yards from the end zone.

But Avena then found Bill for 22 yards, and the Trojans called timeout with 11.9 seconds remaining. Another Avena-to-Bill completion netted 21 yards to set up Pahrump Valley at the Virgin Valley 26. But after a timeout, the Bulldogs put heavy pressure on Avena on the next play, forcing an incompletion when the Trojans had a man deep down the field, leading a Virgin Valley coach to scream, “How was he behind you?” to a defensive back. The Bulldogs sacked Avena on the last play of the half.

Those two plays accounted for all but 7 of the Trojans’ 50 passing yards — Bill skied for the other completion late in the third quarter.

After Pahrump Valley scored to cut the lead to 14-6, Virgin Valley took over at its own 30 with 7:56 to go in the game. On a series that brought back memories of the Trojans’ 2018 season, the Bulldogs ran out the clock with an impressive 13-play drive.

The drive included two fourth-down conversions. The first, from the Virgin Valley 34 on their first set of downs, featured Barnum bobbling the snap on a punt and then scampering 6 yards for a first down. The second, four plays later, was more conventional, as Workman — who carried six times on the final drive — stormed ahead for 3 yards on fourth-and-2 from the Bulldogs’ 48.

But another gutty call kept the drive alive on third-and-7 from the Pahrump Valley 46. Risking stopping the clock with an incompletion, Barnum rolled right and found Guzman for 14 yards to the Trojans’ 32. The new set of downs with 1:15 left basically settled the matter.

Another series in the game also brought back memories. Pahrump Valley coaches were furious last season when their offensive line was called for holding several times, each time on a block done the way the players were taught. The shoe was on the other foot Friday night, as the Bulldogs were called for holding twice on three plays, backing them inside their own 10.

Virgin Valley coaches reacted vociferously to the calls, screaming, “That’s a legal block,” and “That was a pancake block,” at the disinterested officials. The end result was the Bulldogs punting from their own 7, and Barnum’s short punt gave the Trojans the ball on the- Virgin Valley 25 and set up the home team’s only score.