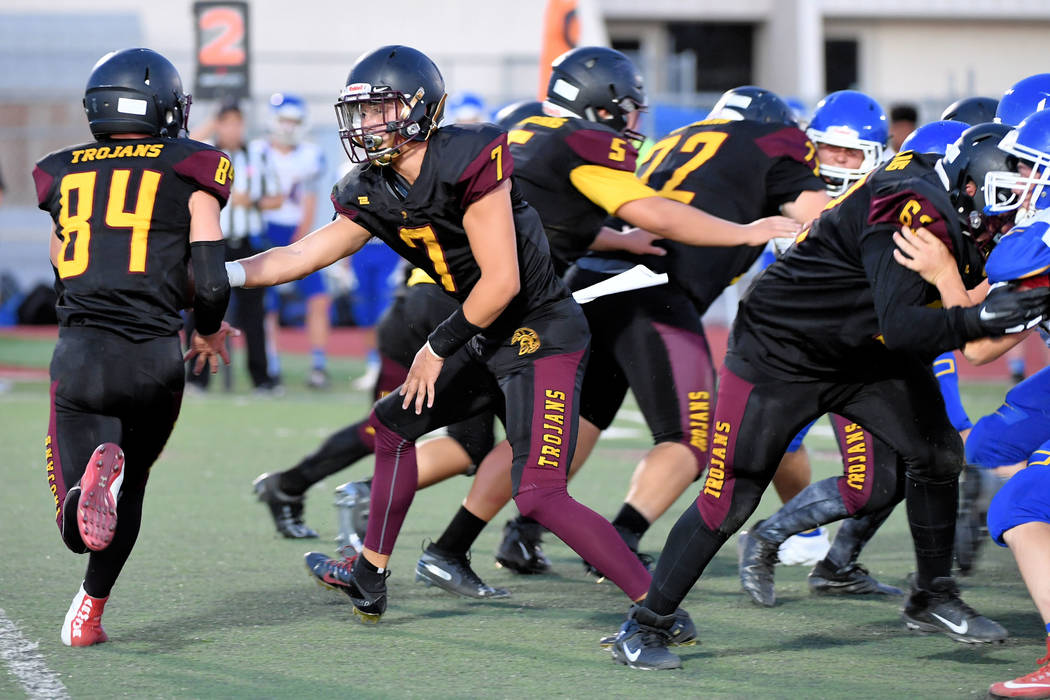 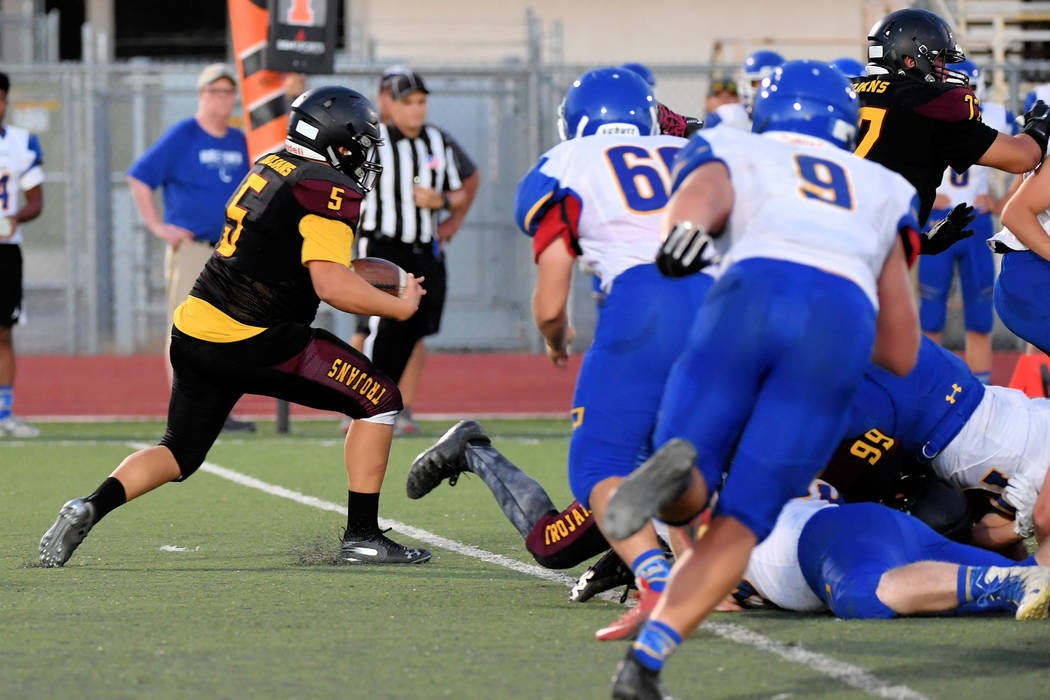 On many football teams, changing quarterbacks is huge news, likely to cause internal dissension and arouse many questions.

But this wasn’t a matter of incumbent starter Dylan Wright being benched as much as it was a mutual decision between Wright, coach Joe Clayton and the rest of the coaching staff.

”We talked,” Clayton said of the Aug. 26 conversation following the first practice after the opening loss to Lowry. “Dylan was having a tough time. He wasn’t feeling comfortable at quarterback, and we spent a couple of weeks as a staff discussing the possible switch.

“Not that Roman wasn’t ready, but we thought this was a great week if we were going to make the switch at least, if nothing else, give him the opportunity to give us a two-quarterback rotation to see how it worked out. He stepped up, did a great job, so well see how it plays out. He understands the offense, and we knew that, and we’re comfortable with him in there.”

The Trojans don’t throw the ball much, of course, although last year Wright and Joey Koenig developed a lethal connection that accounted for 391 yards and 5 touchdowns. This year, Pahrump Valley passed for just 43 yards during the first two games.

Roberts threw just one incomplete pass Friday night against SLAM Academy, but he did convert a fourth-and-1 with a 2-yard keeper that kept alive a drive that ended in Pahrump Valley’s first touchdown. But most of all, Roberts simply played traffic cop in the Trojans’ jet offense, an offense in which an invisible quarterback is often the best quarterback.

As for where the Trojans go from here, that has yet to be decided, Clayton said.

”It could be a two-headed monster, or Roman takes over and we find Dylan other opportunities to help us out,” Clayton said. “The biggest thing is Dylan can help us defensively, and as thin as we are that gave us another body on defense.

For the record, Wright did get a few carries as Pahrump Valley spread the ball widely in the absence of leading rusher Tony Margiotta. His third carry gave a glimpse of what he can do on offense, rambling 11 yards to set up first-and-goal at the SLAM 2.

The already-thin Trojans dressed just 21 players for Friday night’s 32-14 win over the Bulls, and when the wounded include linemen and the leading rusher it could be devastating for a run-first offense.

Against SLAM that wasn’t the case, as while the Trojans didn’t break off too many big runs — Kenny Delker’s 59-yard touchdown scamper notwithstanding — they did grind out 236 yards on 41 carries. But reinforcements could be coming soon in the trenches, and Margiotta’s situation is not as bad as originally feared.

”It’s quite possible we’ll have Jacob Lopez back” for Friday night’s homecoming game against Boulder City. “There’s a good possibility we’ll have Armani (McGhee) back within the week.”

Meanwhile, Margiotta was limping around without crutches on the sideline Friday night.

“It’’s not torn. Nothing’s torn,” Margiotta said of his medial cruciate ligament. “Four weeks and I should be good for first game of the league.”

The junior, who rushed for 181 yards and 2 touchdowns during losses to Lowry and Virgin Valley, was maneuvering rather well on the sidelines, where he enthusiastically cheered on his teammates and occasionally had words of advice for players coming off the field.

Margiotta alternated between using crutches and limping without them, but by game’s end he was without them in the postgame huddle in the end zone.

“It feels good,” Margiotta said of his knee. “I can bend it, it’s just a little swollen on the inside. But my trainer is going to put me through physical therapy, and I’m going to Dr. (Mike) Taylor’s. I’m getting an MCL brace, and they’re customizing that for me now.”

”We had good news from Tony,” Clayton said. “He’s only going to be out about three weeks. It’s not as serious as we thought it was, so he should be ready for league.”

The Trojans face Coronado and then have a week off after playing Boulder City, starting Sunset League play Oct. 4 at Cheyenne.

Clayton said after Margiotta was injured that the plan was for the Trojans to go with a committee approach to running back. Indeed, it was everybody into the pool, as Delker, Wright, Roberts, Andrew Avena, Kody Peugh, Jalen Denton, Donnie Miller, Neal Redmond, Fabian Soriano and Cameron Olson each had at least one of the Trojans’ 41 carries.

“It was kind of cool tonight,” Clayton said. “Guys that got a few touches they’re normally not getting. Donnie got the ball a few touches he more than he normally does and a couple of other boys, so that was good.”

And the Trojans kept those 20 legs fresh.

“We kind of had a two-play rotation with them, so we had lots of bodies going through there,” Clayton said.

Delker led the way with 82 yards on 9 carries, while Peugh was next with 9 carries for 56 yards. Delker scored on runs of 59, 2 and 2 yards, while Peugh scored Pahrump Valley’s first touchdown on a 5-yard run late in the second quarter.

“Thee biggest thing is it’s tough with as thin as we are we had to pull him off defense simply because he was exhausted,” Clayton said of Peugh. “At halftime, we made some adjustments and moved bodies around.”

Should the Trojans get all of their players healthy by the start of league play, the rest of the Sunset League appears to be evenly mixed between haves and have-nots, at least in the early going.

Here’s a quick look at the Trojans’ league foes after three weeks:

Cheyenne: The Desert Shields (2-1) are the only league team with a winning record, defeating Eldorado (54-14) and Rancho (43-7) and losing to Boulder City (12-7). Junior Majae Madison has been the workhorse back, rushing 32 times for 304 yards, while senior Jason Black has 213 yards rushing. Senior Devonte Armstrong has completed just 13 of 32 passes, but he is averaging 114 yards per game and has thrown for four touchdowns. The Trojans defeated the Desert Shields 38-12 in 2018.

Del Sol: The Dragons were a surprise team a year ago, and while they are off to a 1-2 start the scores indicate they are again a solid team. Del Sol’s win came against SLAM Academy (42-14) and the losses have been to Desert Oasis (40-21) and Virgin Valley (28-27). Dual-threat senior quarterback Damani Wilks has thrown for 374 yards and 4 touchdowns while rushing for 231 yards and 4 scores. Wilks is averaging 9.63 yards per carry, while senior Rich Biago, a 5-foot-6, 160-pounder, is averaging 8.31, with 108 yards on 13 carries. Senior Maalik Flowers is Wilks’ top target with 15 catches for 167 yards and 2 touchdowns. The Trojans defeated the Dragons 27-14 in 2018.

Valley: The Vikings have had a rough time, going 0-3 against Class 4A schools Bonanza (30-14), Desert Oasis (42-21) and Clark (12-6). Valley quarterback Jarrett Zibert is attempting an average of 28 passes per game, completing 46 percent of his passes for 415 yards and 5 TDs. Zibert also has rushed for a team-leading 118 yards but only for 3.2 yards per carry. Nobody else is carrying the ball more than four times per game. Isiah Ramirez (115 yards) and L.J. Perry (110 yards) are Zibert’s top targets. The Trojans defeated the Vikings 36-33 in 2018 to cap a 5-0 Sunset League season.

Western: If history is any indication, the Warriors are done winning for 2019. The last time Western won more than one game in a season was 2010, when they went 3-6 in the 4A Southwest League. They went 0-9 the following year and have gone 2-61 overall and 0-39 in the Sunset since. The Warriors have been routed by Rancho (31-0) and Sunrise Mountain (55-0) and defeated Class 2A Calvary Chapel (21-0). Western’s leading rusher has just 109 yards on 33 carries; nobody else has more than 30 yards. Christopher Williams has completed just 11 passes for 147 yards and a touchdown with 2 interceptions. Consider the Oct. 18 game in Las Vegas a virtual bye week for the Trojans, who defeated the Warriors 66-0 in 2018.

Outlook: The top three teams in the Sunset will qualify for the postseason, and it’s difficult to imagine the Trojans losing to Valley and Western, unless, of course, they take that attitude into the games. Well, Valley, anyway, as the Vikings did give the Trojans a great game last year. Getting a decent seed will come down to beating Cheyenne and/or Del Sol, and the Dragons putting up 27 points on a Virgin Valley team that blanked the Trojans certainly will get the attention of the Pahrump Valley coaches. The Trojans’ first two league games are against Cheyenne and Del Sol, so we’ll know early where they stand for the postseason.