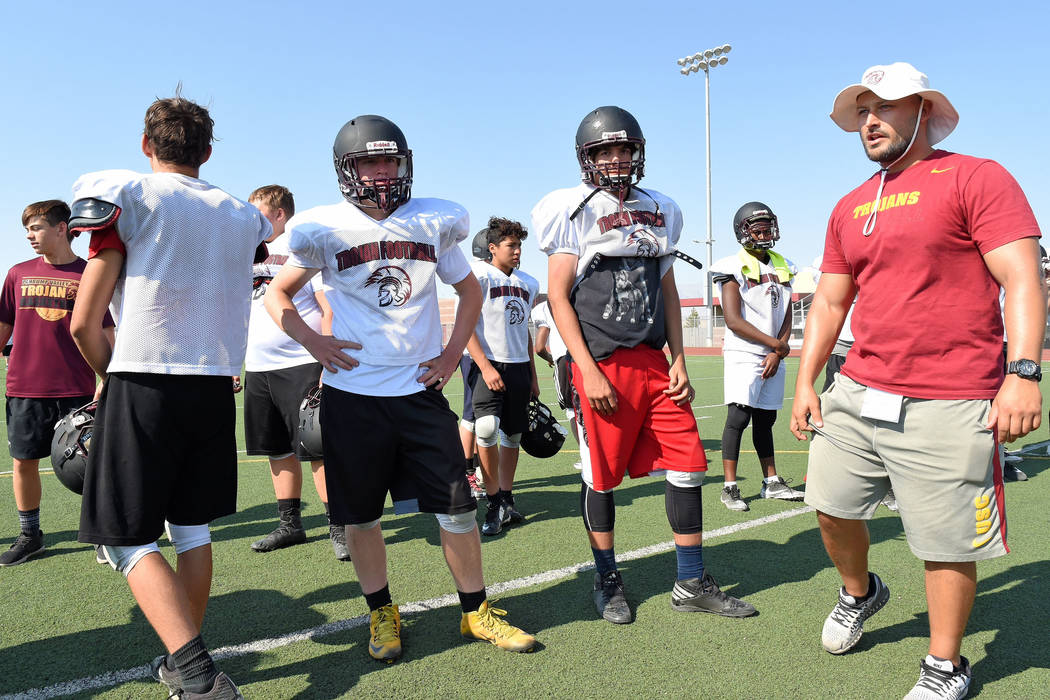 Peter Davis/Special to the Pahrump Valley Times At last week’s Trojans football camp, Trojans coach Mike Colucci has a coachable moment with some of the football players. The Trojans are at the Southern Utah University football camp this week. 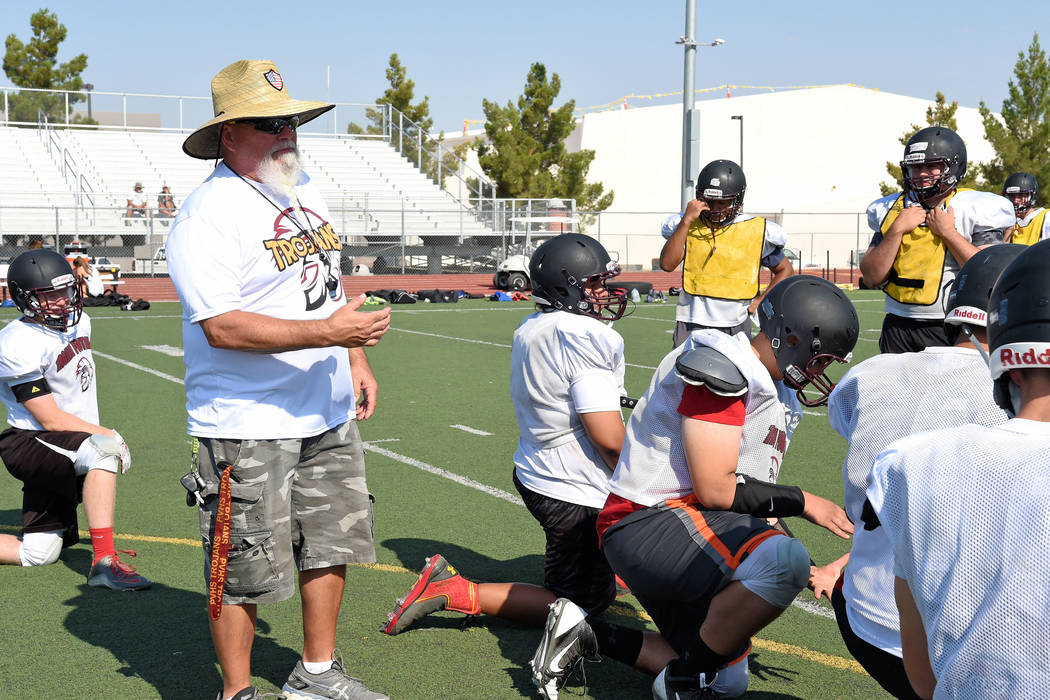 Peter Davis/Special to the Pahrump Valley Times Fred Schmidt pushing his linemen during last week’s Trojans camp. Schmidt has been with Clayton, along with most of the other coaches, for more than five years. 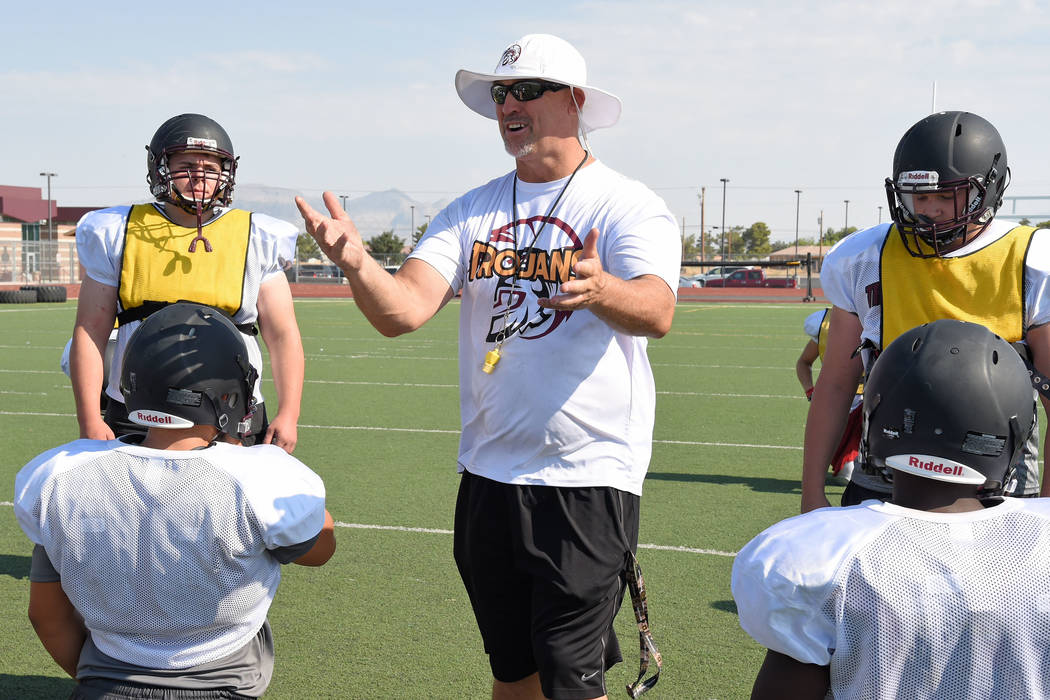 Peter Davis/Special to the Pahrump Valley Times Joe Clayton explains some defensive principles to his defensive backs. Clayton will be entering his fifth year as the Trojans head football coach. Clayton is 15-23 in those years and had his first winning season last year as head coach. 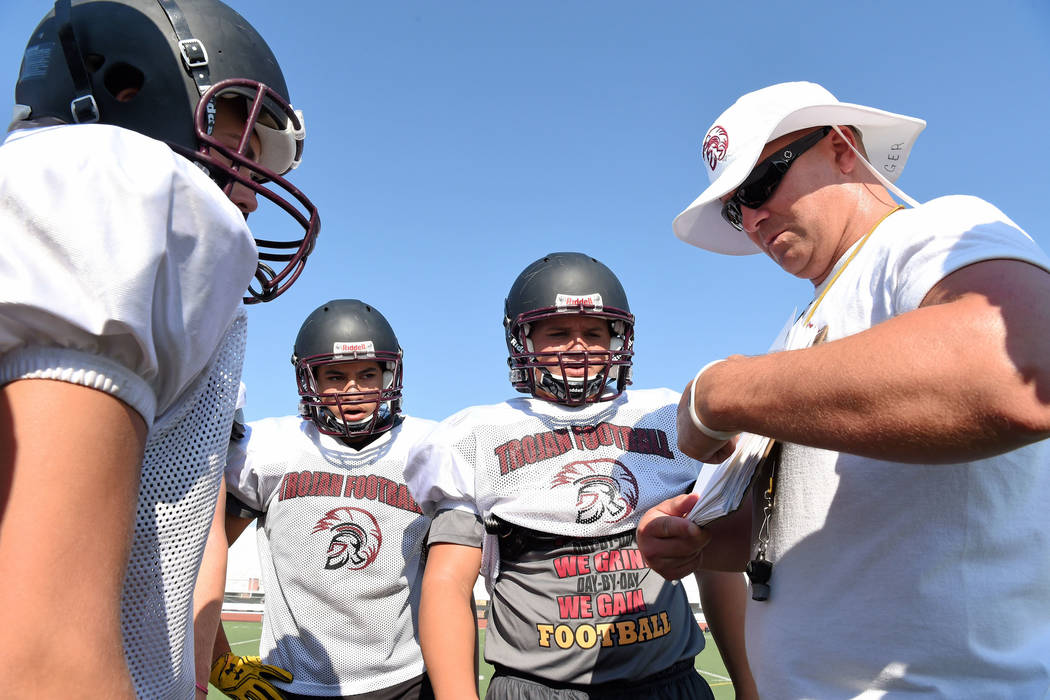 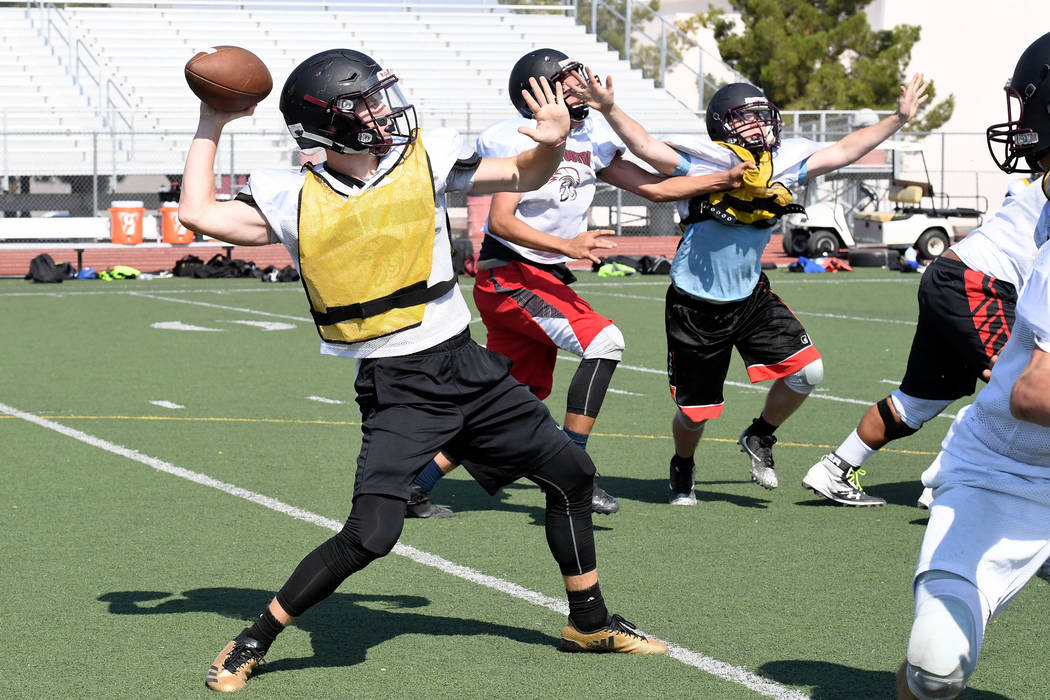 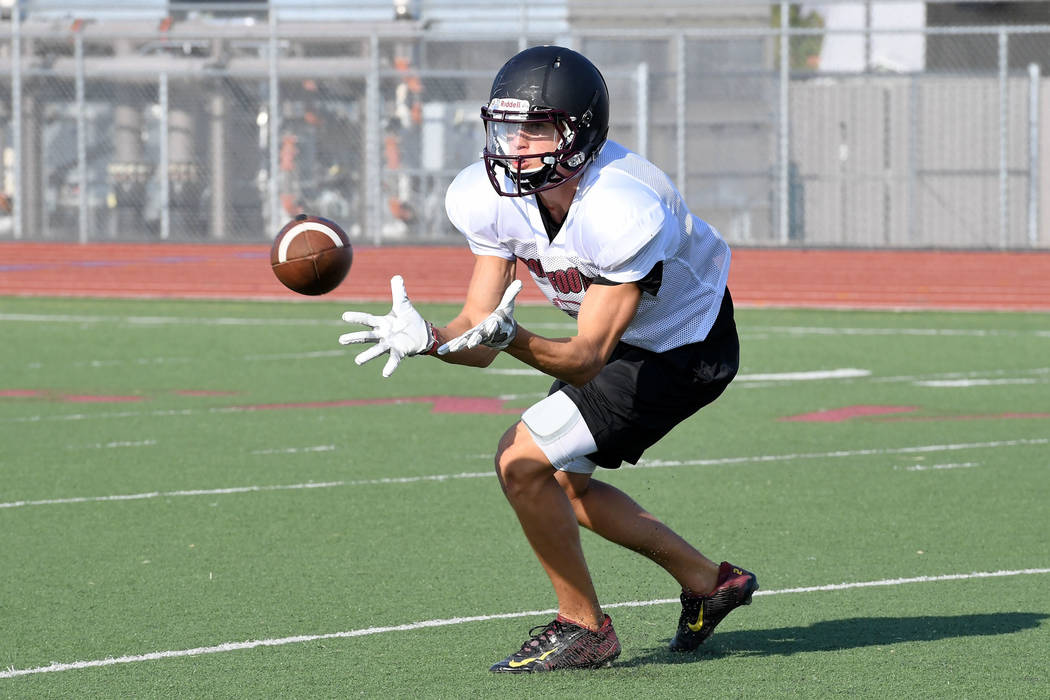 Peter Davis/Special to the Pahrump Valley Times An unknown Trojans receiver goes for a catch during the Trojans mini-football camp last week at the high school. The mini-camp was to get them ready for the full-contact camp at Southern Utah University in Cedar City, Utah all this week.

The Trojans football team is hitting the gridiron in mid-July in preparation for the upcoming season.

Under Joe Clayton, the Trojans football team has gone to the Southern Utah University football camp, where the team is exposed to full-contact hitting in preparation for the football season.

These camps give teams more time in pads during the summer and the camps are permitted by the Nye County School District and the Nevada Interscholastic Activities Association.

With the first home game for the Pahrump Valley Trojans high school football team just 37 days away before they hit the field against Durango for their home opener on August 25 and summer football training well underway, most football fans just assume the team is doing a lot of running, and they would be surprised to find they are wrong.

Yes, the team runs but running and mindless conditioning is out. Those days are gone, at least in Pahrump. Under Joe Clayton, the football team spends its valuable summertime doing more productive activities.

“When I was a kid growing up, the high school running during the summer is what we did,” Trojans head football coach Joe Clayton said. “We don’t condition during the summer. That is not our focus. I went to a clinic some four years ago and the strength and conditioning coach for Nebraska was there talking. He was at Nebraska when they dominated during the 80s.

“First thing he said was ‘We were the best team in the eighties and everything we did during then was the opposite of what you should be doing now.’ I think we got more educated on how to train athletes as they got bigger, stronger, faster.”

The focus on the football field during the summer nowadays has shifted from a run-based camp to a camp that better serves the team’s purpose-learning to work better as a unit.

Running still has a place but there is a time for that.

Clayton remembered fondly the coaches that did nothing but running and conditioning all summer.

“When my boys were playing football here, they once told me that their line coach had them running two miles. We all grew up with that and that is wrong,” Clayton said. “I was told by this trainer that he could get a kid off the couch who is fat and lazy and doesn’t do anything and can get him in shape in two weeks. So he said why just run your team to run them all summer. What that does is it makes lean muscle and does not pack on that muscle mass and strength.”

Clayton said to this day you still have coaches running the snot out of their kids all summer, but they can’t get that muscle mass.

“Linemen should not be doing 60-yard sprints,” he said. “They should be doing short bursts.”

Muscle mass is definitely more important for a football team.

“You have to make sure they are in shape,” Clayton said. “So there is a fine line. That was the best thing I learned in a clinic.”

Clayton said the running has been replaced with instruction and getting ready for the season, which means on the field there is more learning than meaningless conditioning.

“We are way ahead of the game this year,” he said. “We will be ready to go when we come back. We will have a week off and then we are in school. We are excited to have the camp in July because we will be better prepared for it. We are excited and prepared.”

“You can see this working in the difference between a sprinter and a long-distance runner,” he said. “Sprinters increase the muscle mass. The sprinter is more bulkier for speed and power while the distance runner has lean muscle, they can last longer but don’t have the power.”

He adds, “Cardio loses weight and does not increase speed,” he said. “You are burning fat and not building muscle. The minute you stop doing the cardio, you stop burning calories. If you do nothing but cardio, Clayton is right, your muscle turns lean and you don’t bulk up.”

Who will be the new QB

Clayton said senior Dylan Coffman will be a starter, taking over for Parker Hart.

The coach also said he has the biggest front line since has been head coach; he is in his fifth year.