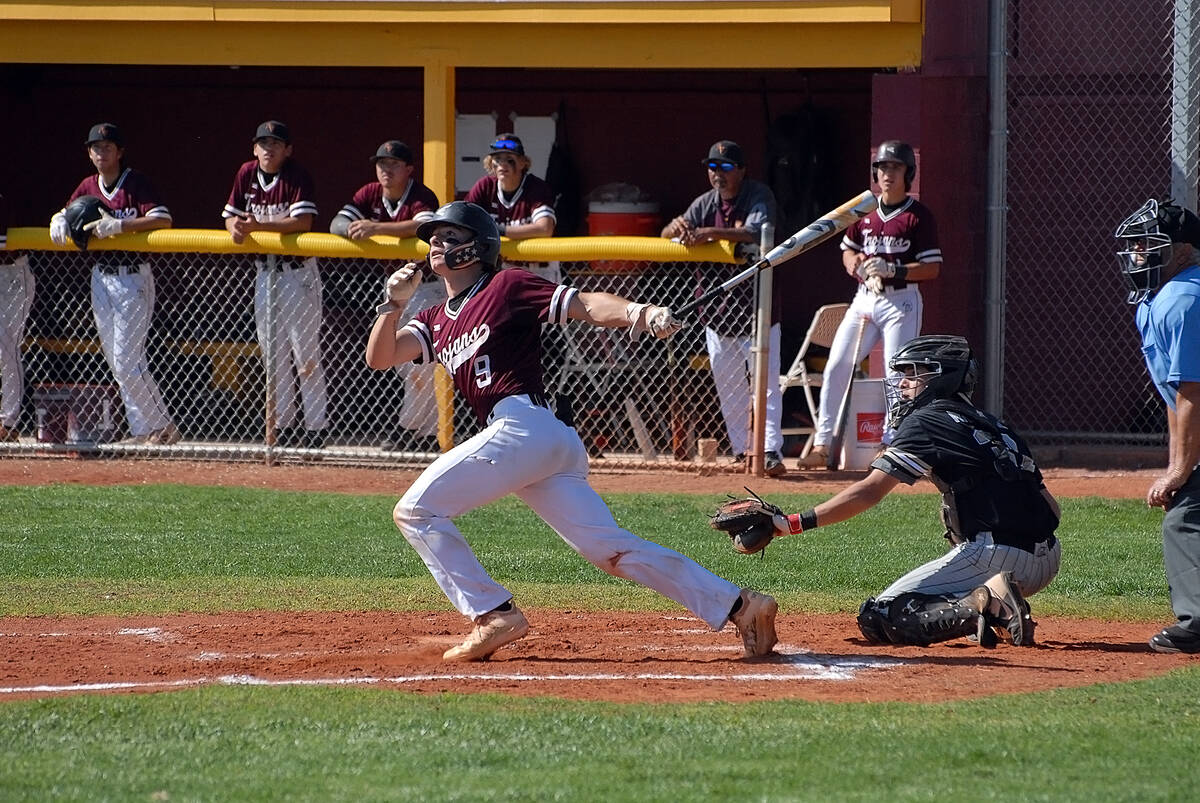 Horace Langford Jr./Pahrump Valley Times Senior Colby Tillery (9) looks on as he hits a shot to the outfield for a 2-run double during the Trojans' game against the Clark Chargers on Thursday, April 7, 2022. The Trojans defeated the Chargers 8-1 in the first round of the 3A southern regionals on Monday, May 9, 2022.

The Pahrump Valley Trojan baseball team opened up their 3A southern regional playoffs with a huge 8-1 win over the Clark Chargers on Monday afternoon.

This was the third matchup between these two teams this season – and the third win by the Trojans.

Pahrump Valley entered the regional playoffs as the No. 2 seed in the Mountain league after finishing the season with a league record of 8-2.

The Trojans are looking to reach the regional championship game for the third time in the last four seasons.

Betancourt gave up just one run, while allowing four hits and striking out two batters.

Kyle McDaniel and Zack Cuellar were both key parts in the Trojans offense on Monday.

McDaniel and Cuellar combined to go 5-for-8 with six runs batted in. They each hit a 2-run double to help Pahrump Valley jump out to a 7-0 lead by the end of the third inning.

The Chargers pitchers struggled with the command of their pitches throughout the game. The four pitchers combined to walk six and hit four Trojan batters.

Outside of only getting four hits, this was the downfall for the Chargers as the Trojans were able to take full advantage of each opportunity they were given.

Clark’s only run of the game came in the top of the seventh inning. With runners on first and third, the Chargers’ shortstop, Gambetta, hit a ground ball back to Betancourt that allowed the runner to score from third base.

As I’m writing this, Pahrump Valley is preparing to take on the Virgin Valley Bulldogs in the second round of the winner’s bracket. The Trojans had to travel to Mesquite for the matinee game.

If the Trojans were able to come out of Mesquite with a win, they would advance to the final winner’s bracket game, awaiting the winner of Moapa Valley vs Boulder City.

If the Trojans weren’t able to get the win against the Bulldogs, they’ll head to the loser’s bracket to face the winner of SLAM Nevada vs Eldorado.

You can check all of the outcomes for each playoff game by going to MaxPreps.com or checking in the baseball section on NIAA.com and choosing the 3A southern regional bracket.