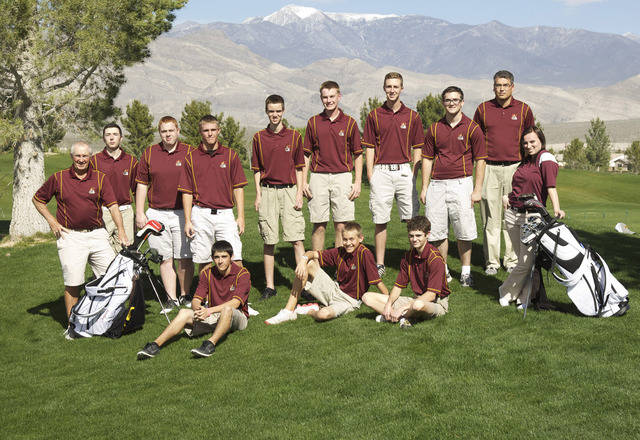 Trojans Golf has three tournaments already under their belt in the young season and Trojans Coach Bob Hopkins has been satisfied with the results.

“We hope to be stronger than last year, but we just need to find a winning combination. Right now we are kind of struggling at 4th, 5th, and 6th place,” Hopkins said.

The first match of the season was last week at home at Mountain Falls on Thursday against a mixture of Division I, I-A, and III teams with the Trojans coming in fourth place, shooting a 443. Faith Lutheran took first, shooting 392.

In Hopkins opinion, the Faith numbers will be hard to beat, but not insurmountable. His goal is to get his team down to 420.

“We played all right. Derek Moore shot a 79, Austen Ancell 81 and Kyle Steib shot a 82. Kyle and Austen both had big numbers. Austen had two triple bogies on the back and Kyle had a couple of problems on a couple of holes. Brandon Hastings is our fourth golfer. He just is not shooting as he should be. Faith is the best team down here and they came to Mountain Falls and shot a 392 without one of their best golfers at home,” Hopkins said.

Despite the slow start, the coach is optimistic because his team needs five golfers to shoot under 450 to qualify for regionals. His team did that the first time out and he is confident his golfers can shoot even better. To add to the excitement, this year the state tournament will be at Mountain Falls for all divisions.

“We have a good group of kids this year. We are going to work hard and our goal is to make it back to state being the state tournament is here. The top three teams get into state and last year us, Boulder City and Faith were the only teams which qualified for the regional,” Hopkins said excitedly.

The Trojans in their second time out were at Falcon Ridge at Mesquite against Virgin Valley during a windy Monday afternoon.

The third match was against Desert Oasis in Las Vegas and was too late to report on.

Hopkins expects his three top golfers Kyle Steib, Austen Ancell and Derek Moore to lead the team and shoot in the low 80s.

He feels the key to success is to get his golfers to buy into lowering their scores by working the short game. In golf, the short game is putting and chipping around the green.

“The kids love the driving range, but that is not where you cut the strokes. I am going to guess that half to two-thirds of your strokes are right around the green. We have to improve on our putting. The year we won regionals we really worked on our putting,” he said.

Of his three top golfers, Steib has the best long ball and Moore and Ancell have the best short game.

Hastings and Tristan Berry are fighting to stay in the top five golfers. Both are seniors.

The three seniors, Steib, Hastings and Berry were asked how they planned to lower their scores this year.

Steib said he will be working on lowering his score by improving his putting.

“On Monday I shot an 82 with 35 putts and I have to be fewer than 30 putts to have a good putting round. I want to be able to avoid the three putts as much as possible. Cutting the penalty strokes and three-putts is the key to a lower score,” Steib said.

He said he had 3 penalties and 4-three-stroke putts at Falcon Ridge.

“My driving and my approach shots have been good. What has been messing me up are my 80-yard shots, distance is killing me on the short shots. My short game has been a lot better since I have been playing golf,” Hastings replied.

Berry said chipping around bunkers has him working hard.

“I will be focusing on chipping to bring my score down and working on my putting downhill,” he said.