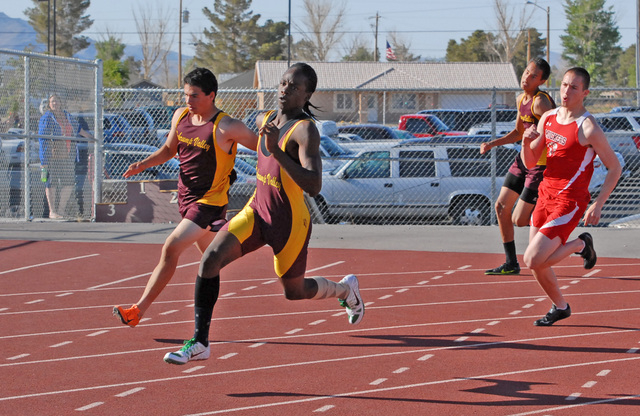 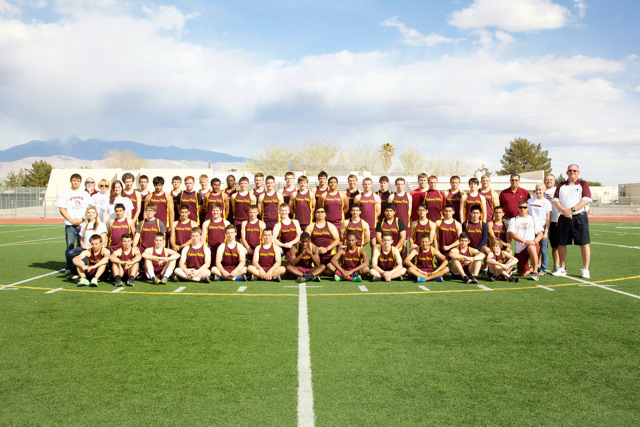 The Trojan boys track team came up short last year and failed to take the region title as expected. The team was supposed to contend for the state title last year but the injury to top sprinter Kennan Harris blew everything out of the water.

Harris is by far the fastest sprinter the Trojans have at 10.74 in the 100 meter. He had hamstring muscle problems last year just before regionlas and with him went the Trojans’ hopes for finishing at the top. This year Randall Cunningham’s track club along with the entire Trojans coaching staff are advising Harris on his muscles.

Trojans Coach Ed Kirkwood is optimistic on Harris and his sprinting.

“Harris tweaked it again and didn’t do it like he did it last year. He really put a hurting on it. He seemed like he was fine but he strained it about a month ago with Randall Cunningham’s group. Keenan is as strong as an ox. He lifts a lot and does a lot of squats. His quads are strong and they sort of overpower his hammy. That’s where he has issues. Randall has given him things to do and I have given some things to do. I tell him to stay away from the squats and work on those hamstrings. They are never going to be as strong as those quads, nobody can get them there,” Kirkwood said.

Kirkwood says he will probably be a bit on the nervous side every time Harris sprints down the track.

“I think early on the season I will keep him away from the 200 meter and focus on the 100 meter and maybe the relay,” the coach said. “He also jumped 18 plus feet in the long jump the other day. Maybe that will keep him loose. Just a few shots down the runway and that will help loosen him up for the track.”

The team is not all Harris and Kirkwood is pleased with the talent amassed for this year, especially in the hurdles. Jalon Dean of Mojave graduated last year giving a clear shot to Nevada State Champion in the 110 hurdles Devon Montgomery and Michael Carlson to dominate the hurdles this season. Both of these hurdlers will be helping out in the relay department and some field events.

On Carlson, Kirkwood says he can put him anywhere and he said, “Carlson could just run out of events. He told me he wants to do multiple events in college. He wants to do as many events as possible. I can see him helping us in the long and the triple. He will also be doing hurdles and may not have an event available.”

Kirkwood believes Montgomery is also like Carlson, a hard worker who loves track and field. Montgomery is the best in the high jump and can also throw the discus.

The Trojans also have another jumper named Isaac Davis, who should jump up to 5-feet-10-inches according to Kirkwood.

“Davis just has springs for legs. He is just doing the jumps and he is just getting better each day. I can see him challenging up there in the high jump. Devon is also running out of events. He has the high hurdles, the discus, and the high jump, and maybe a relay. I guess it just matters what the other team has. I am going to be a juggler this year,” Kirkwood explained.

Another sprinter Trojans fans should watch out for is sophomore Nico Cipollini. Cipollini should take some pressure off Harris.

“Nico Cippolini was also in the top three during time trials in 100 meter. He will do pole vault, discus, 100 and the 200 meter. He will be all over. I am not sure if he will be able to do field events because he will be busy on the track. He will also be doing some relays,” the coach said.

In addition to Cipollini, there are some younger guys coming up that the Trojans will be developing like Jesse Dillon and Nick Clark. Both runners had a good Newcomers meet at Cheyenne High School. Clark ran a 12.64 in the 100 meter and Dillon ran a decent 200 meter.

In middle distance, the graduation of Dustin Dillon, who was about at the 2-minute mark in the 800 meter has left a void to fill.

When the coach was asked who will fill the void, he replied, “There is a bunch who wants to run the 800 meter, Clark, Dillon and Henry Estrella. Estella can run like the wind and he should be down there like Dustin was in the 2-minute range. Anyone that asks me to run the 800 and the 400, two tough races, should run it. Nobody asks to do that, right?”

Estella ran a 2:24 at the newcomers meet, which is great for the first year.

In the distance department, the Trojans have been under construction for the past few years. Kirkwood said he has people that can score in a meet. The following distance runners should make a difference this year: Juan Farias, Nick Nelson, Nolan Toomer, Alex Moore sophomore, Nick Iwinkski, Riley Sutton and Chris Solano.

In the end it will be all about keeping the sprinters healthy this year.

“Mojave won state last year. They will be there. Faith has pretty good distance runners and jumpers. We will get our share of first places and I think we have the numbers to do it to challenge for a title,” Kirkwood concluded.