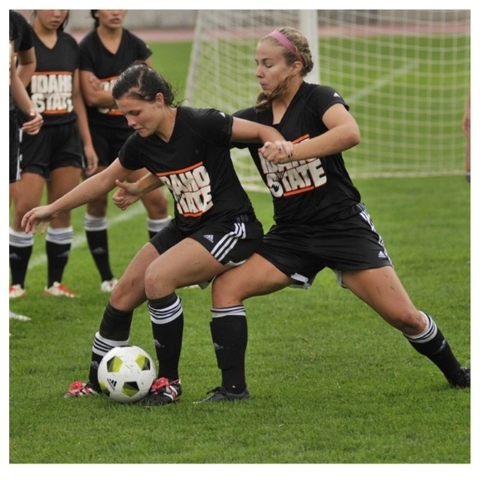 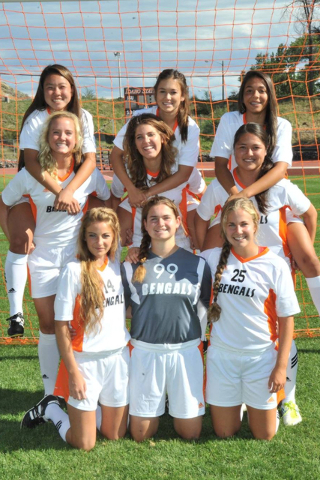 Jennifer McCaw showed up to the Idaho State University campus last year after a heralded career 650 miles away that included state championships and all-region honors.

But she knew the transition from Trojan to Bengal would depend on her.

“You have to be fearless,” McCaw said. “Time management is a must. Don’t get behind in your classes and ask a lot of questions.”

McCaw graduated from Pahrump Valley High in 2014 after helping lead the Trojans to four-straight state tournament appearances, including championships in 2011 and 2012.

But Pocatello, Idaho is a long way from the soccer fields of Pahrump.

“I think my first day was the hardest,” she said. “All the older girls knew what to expect and they had expectations for you because you are now part of their team and the program they are trying to grow.”

She said when things got too hard she would think about all her accomplishments.

McCaw, whose nickname in high school was “Bird,” is considered the toughest midfielder the Trojans ever fielded. She had no problems mowing her opponents down as the center midfielder when necessary, a physical player who got in the opponent’s face. Her defensive play was key to the Trojans’ success.

That play earned her a full scholarship to Idaho State. McCaw said she owes her transition to a Bengal to her teammates.

“I know I was very lucky the team is very close,” she said. “I know that not all college teams are like that. My coach and the older girls knew the importance of team chemistry.”

The Bengals went 10-9-1 in McCaw’s freshman season, reaching the finals of the Big Sky Conference tournament before losing 2-1 to Northern Arizona. McCaw played 240 minutes in 10 games this season. But the transition wasn’t easy.

As a freshman, McCaw was required to report early and she attributes this early camp with helping her to adjust to her new team. The team chemistry helped her get through her tough freshmen year.

“They wanted the freshmen up there two weeks before the season started so that we got to know each other and this helps to get relationships going,” she said.

Not knowing what was expected of her and not knowing what to expect was the toughest part of the year. McCaw said the hardest thing for her was being thrown into everything so fast.

“You don’t get to go to school and slowly transition into it,” McCaw said. “You are just thrust into it with a full soccer season. You practice Tuesday, Wednesday and Thursday and play Saturday and Sunday and you are off Monday. It’s like that from August to November.”

Then there was the two-a-day practices that ran two hours each before school started in August.

McCaw said once you know the game there are just more intense levels of playing. Practice at the college level she said was serious business.

“There is not too much goofing off,” McCaw said. “In high school there was some goofing around but not in college.”

In high school, other teams respected McCaw. But in college that respect had to be earned all over again and there is no room for being timid.

“I am still physical, but things are different,” she said. “I was 18 and there was some seniors out there 21-22 years old with more experience. My first couple of games were like a learning curve. If you don’t watch it, the other players will knock you around.”

She said her opponents didn’t know who she was and were not afraid of her. They really could care less about her reputation in high school.

To make it through the year, she said confidence was a main ingredient of a successful freshman.

“I think I had to build up my confidence on the field,” McCaw said. “If you are not confident it shows.”

This required McCaw to be brave and smart. At the college level, it’s not that much different physically than high school.

“People can tell if you are timid,” she said. “Then they will just come after you. They know they can get past you.”

Bird said there were times she got frustrated and questioned why she was there.

“This is by far the hardest thing I ever have done,” McCaw said. “I would question myself and ask, ‘Do I really belong here?’ ‘Can I do this?’”

The team got her through the hard times and also a close friend, who also shares her position helped her out too.

“I met a friend from Pocatello, Idaho named Kat Roberts,” the Bird said. “We were really similar. She really helped me through the hard times.”

McCaw also said what helped get her through the tough times was being able to manage her time well. The team traveled a lot so she had to be on top of her academics.

McCaw was named to the Big Sky All-Academic Team after finishing her freshmen year with a 4.0 grade point average.

“I will have competition at the position this year,” she said. “Nothing will be handed to me. I split time with one other girl last year.”

She will be majoring in exercise science and hopes to go into physical therapy upon graduation.

A typical day for her during the season would be going to two-to-three classes per day, study hall and then a two-hour long soccer practice to end the day, followed by more study hall. Study hall is mandatory for all freshmen student athletes.

According to McCaw the key to academic success is just making sure you have a good relationship with the professors because as a player she missed a lot of classes.

“We would leave on Wednesday and the professors were good, they were helpful,” McCaw said. “We had a good relationships with the teachers. The school was small and they knew who we were. They expect a lot from freshmen and they expect a lot from everyone on the team. You have to give it your all the entire time.”