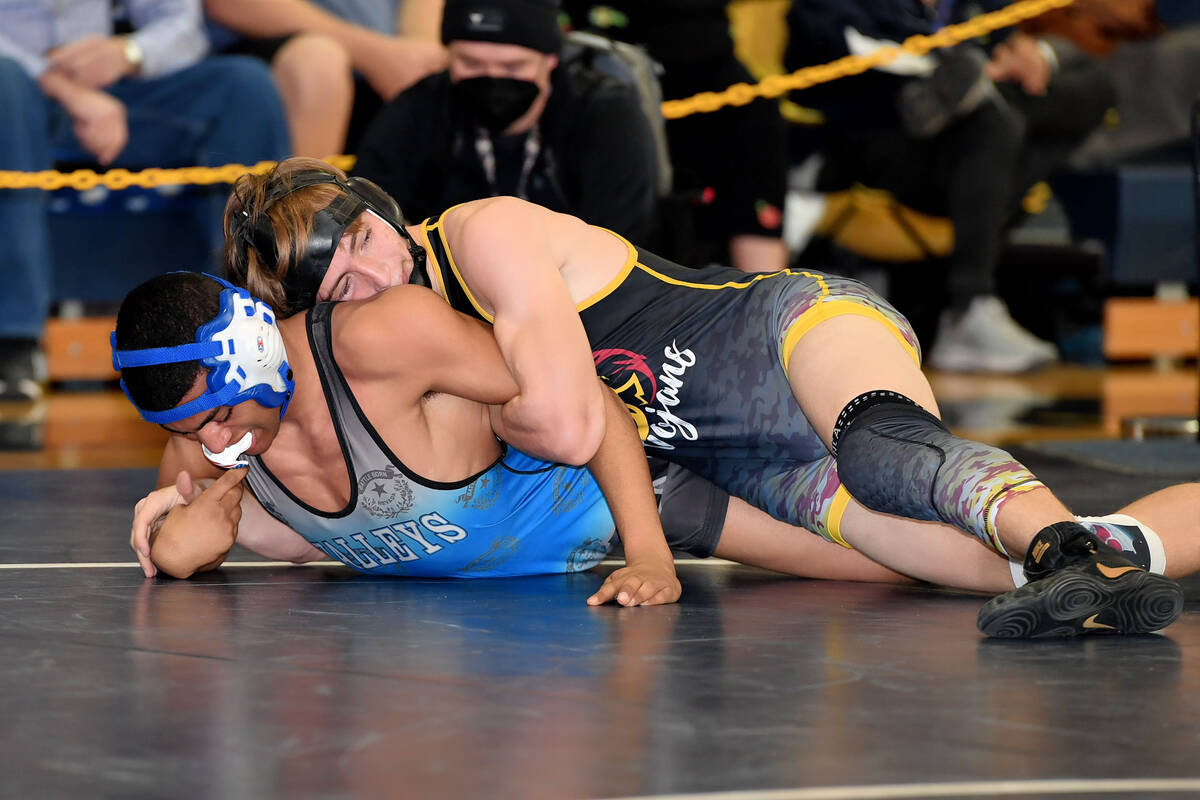 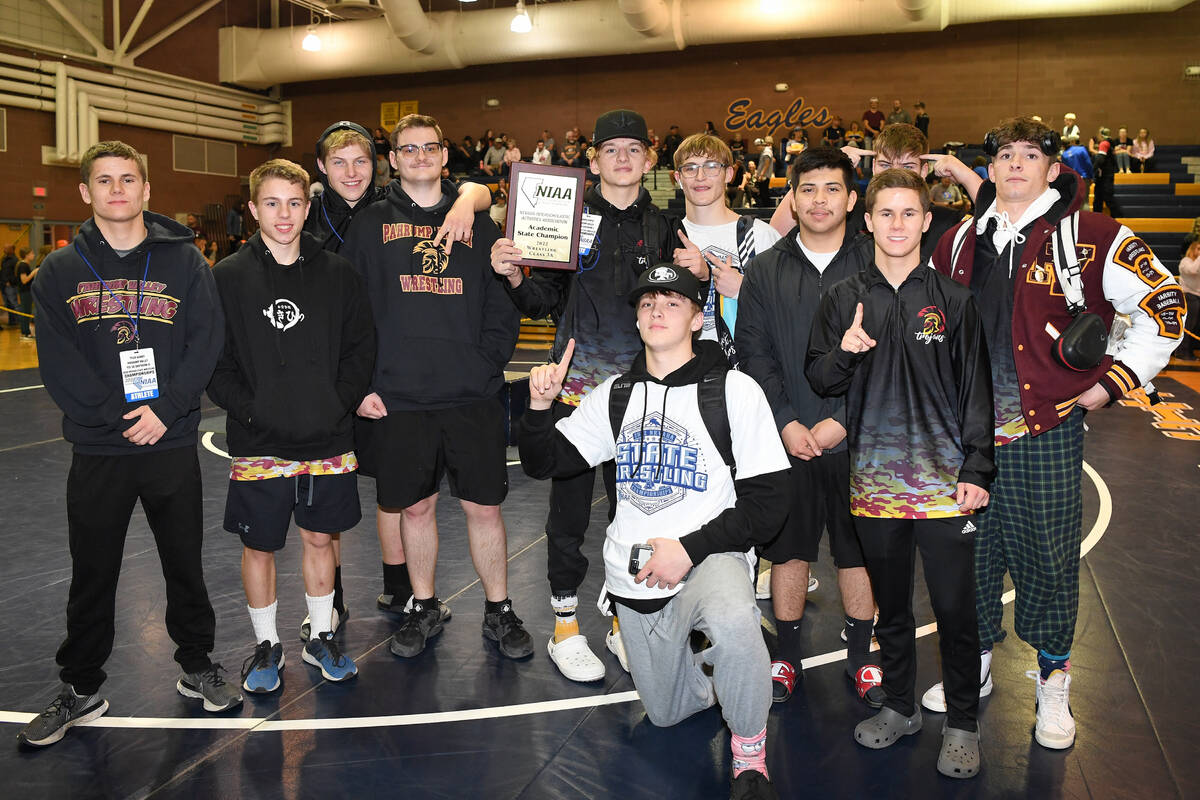 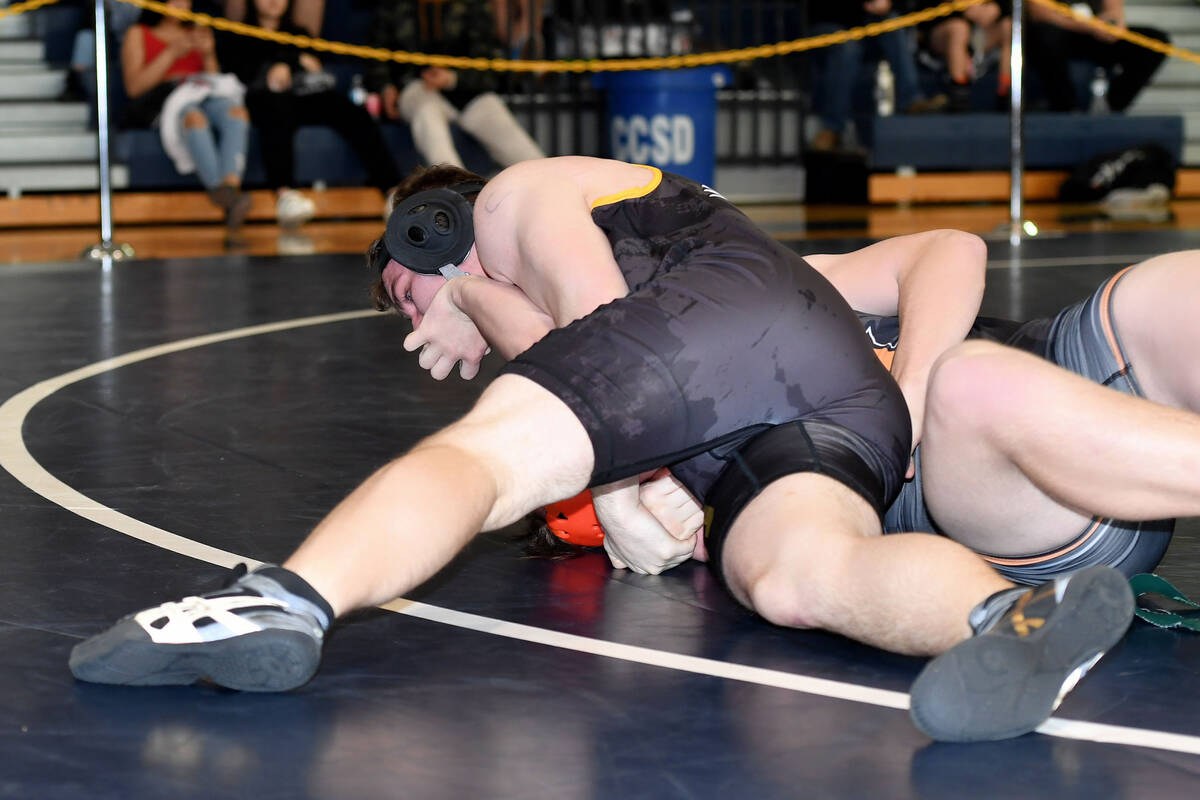 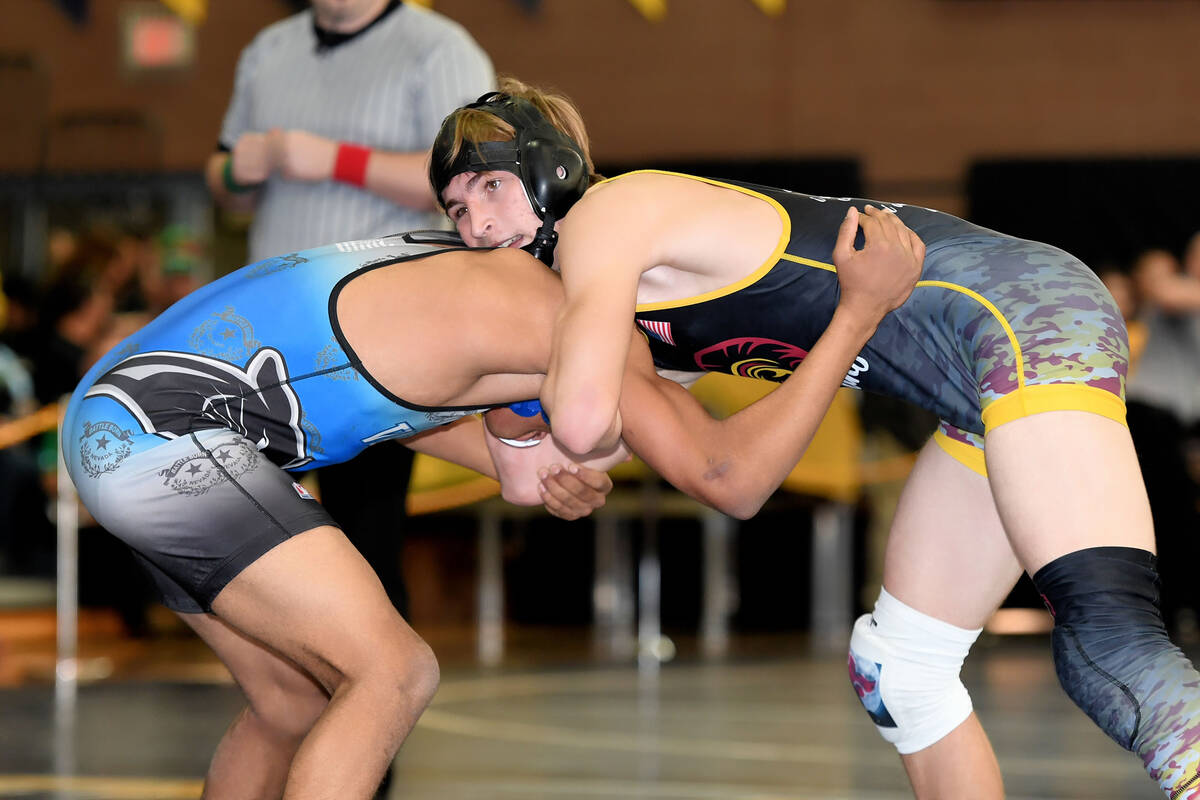 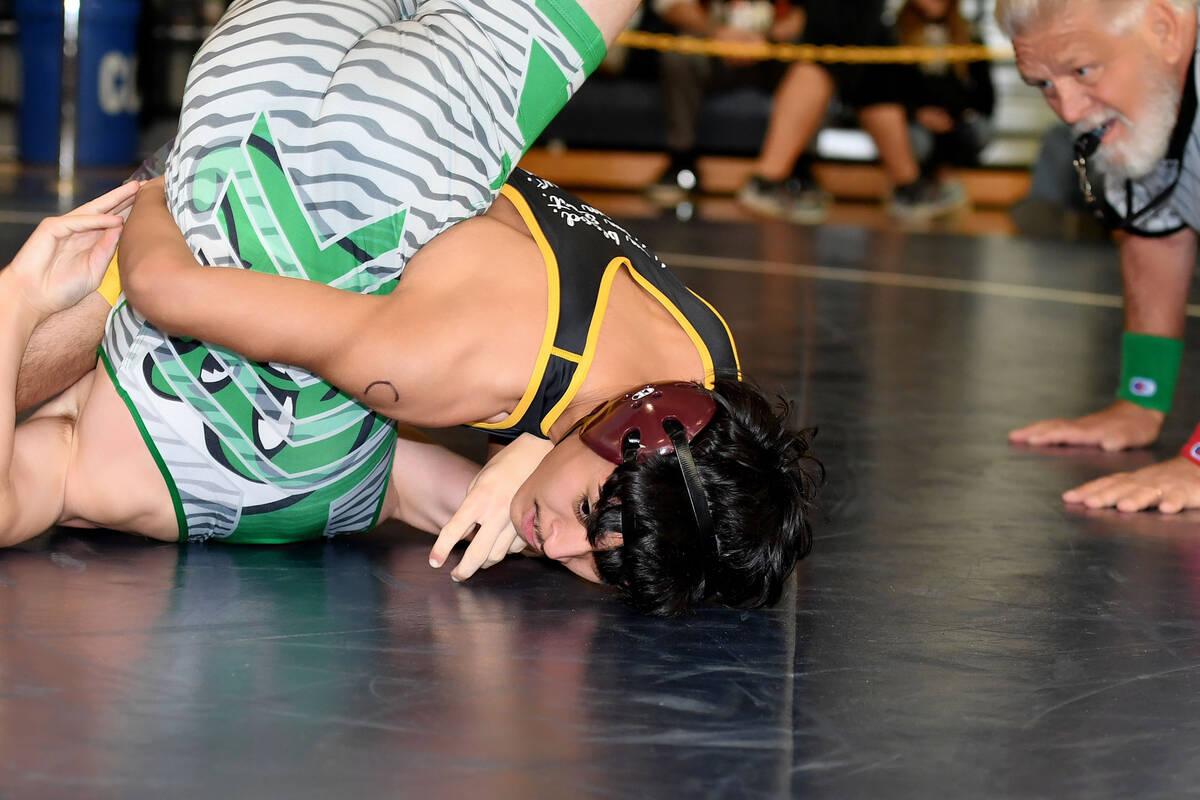 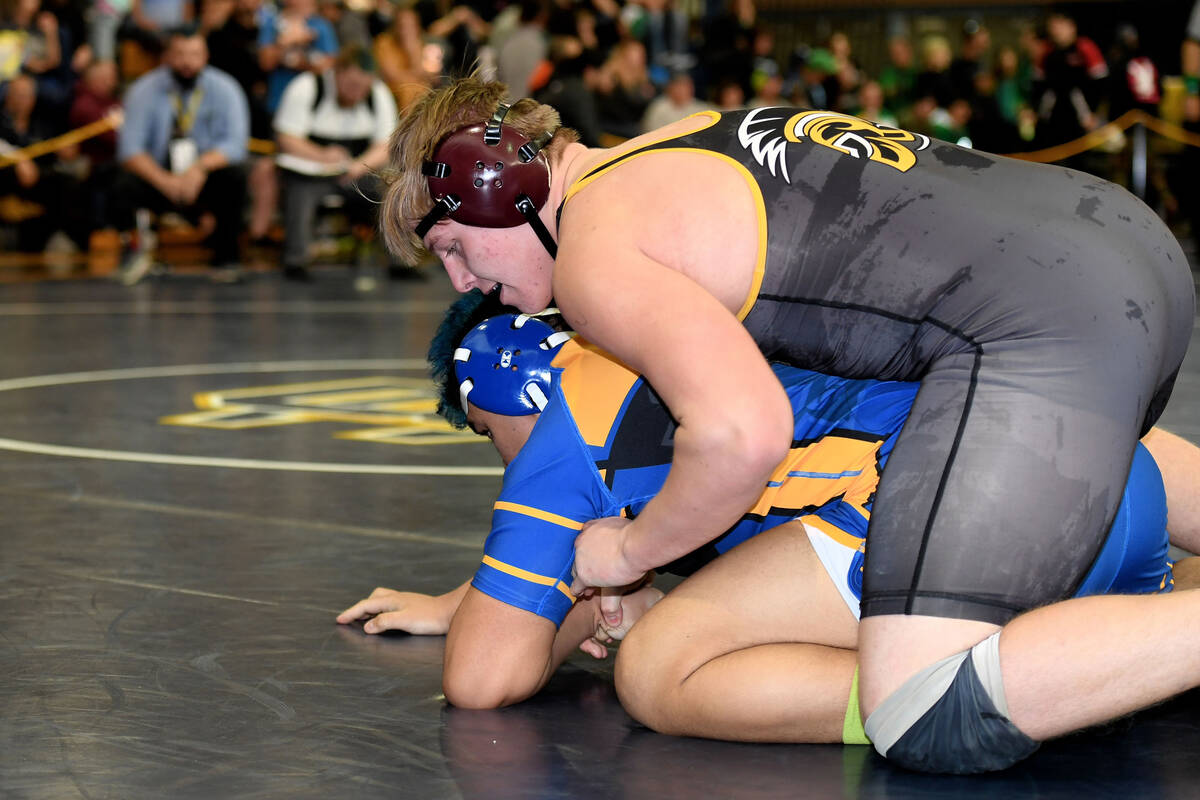 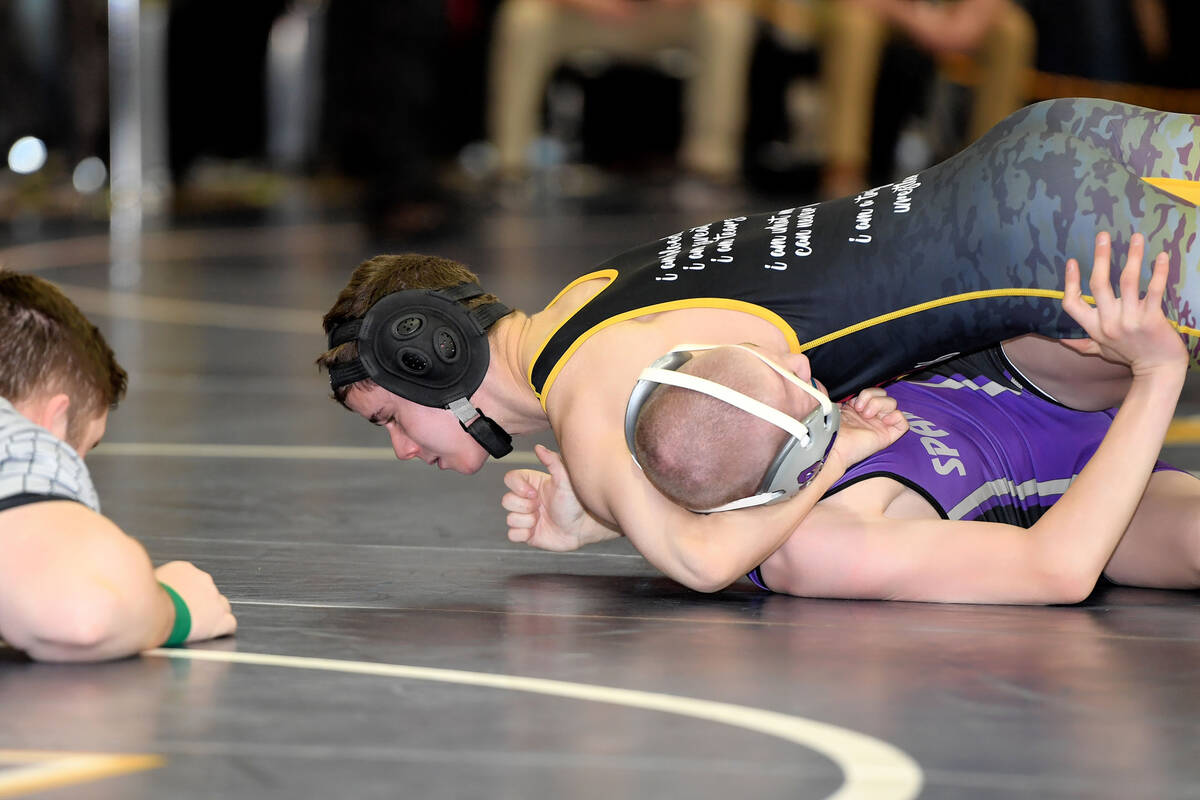 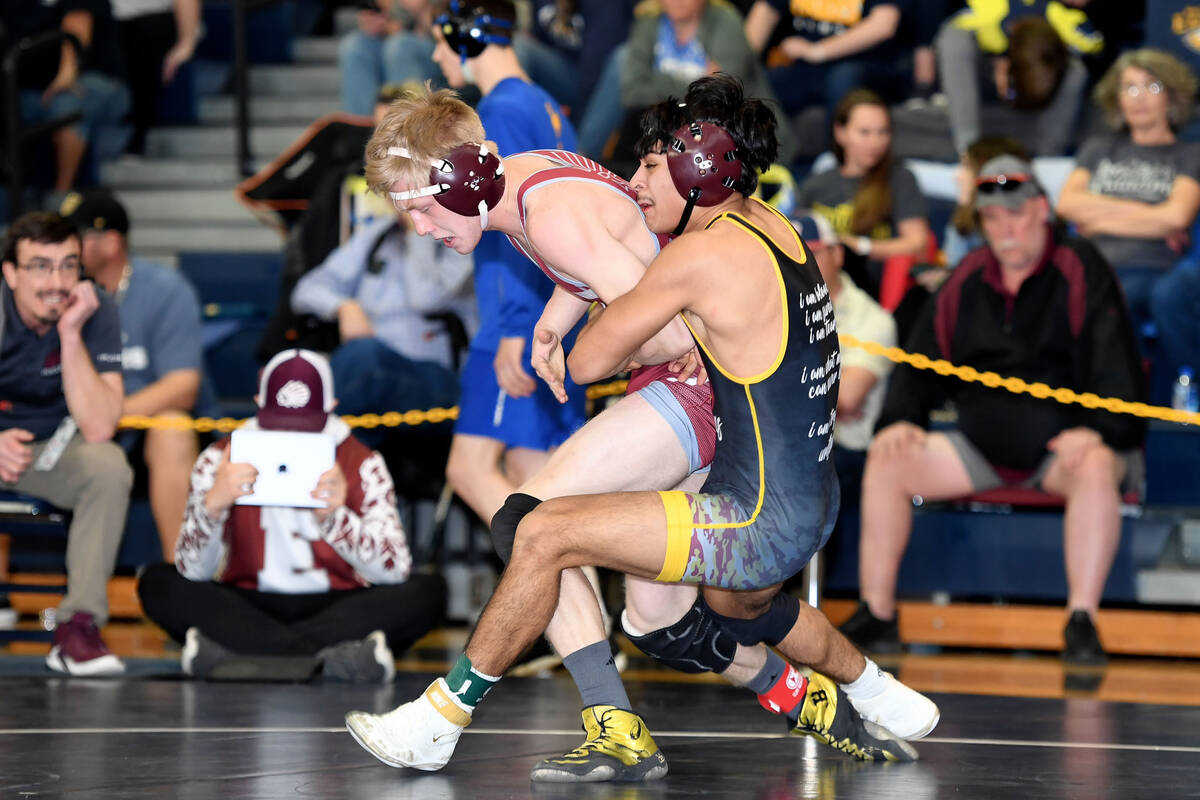 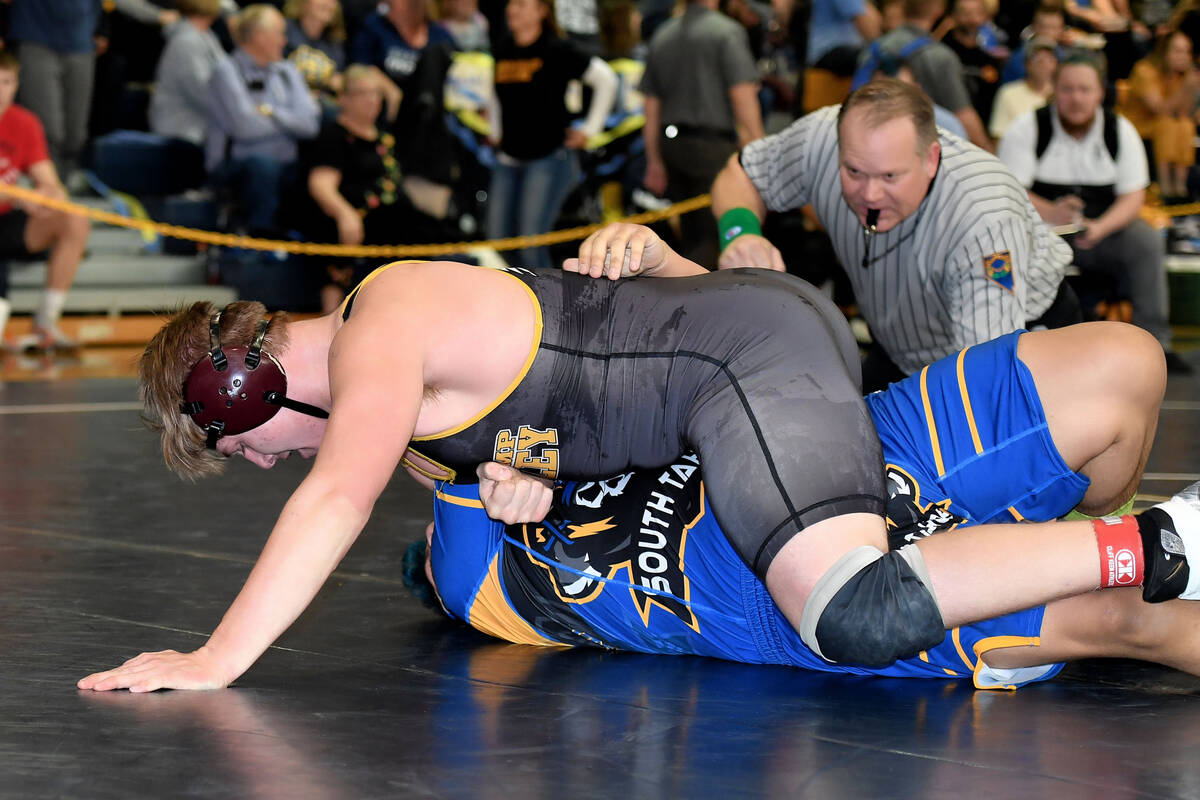 Seventeen schools were represented at the tournament – nine from southern Nevada and eight from northern Nevada.

The entire Boulder City gym was filled — some were standing along the walls in the gym for the entire tournament because there weren’t enough seats.

“It was electric,” Boulder City High School Athletic Director Alex Moore said of the atmosphere. “Standing room only. It was unbelievable, the crowd was into it. The electricity in here brought all of the athletes up and they performed out of their minds.”

The Trojans went into the tournament with 12 wrestlers, having someone in every weight class except for the 152-pound and 160-pound classes. Only Elko High School had more wrestlers in the tournament, with a total of 14.

All year long the Trojans coaches have expressed how much work the wrestlers have put in to be at the top of their game all season long. Assistant coach Joe Clayton described their work ethic as “blue collar”.

He mentioned that all of the kids know they have a lot of work to do to compete with some of the bigger schools and that they all give maximum effort day-in and day-out.

In the first round of the tournament, Pahrump Valley finished with an overall record of 5-7. Four of their five wins came with first-round pins. The only non-pin win for the Trojans was sophomore Brennen Benedict’s 5-4 decision.

The first win of the day for the Trojans came in the 126-pound division.

Undefeated senior Chris Vega was able to pin his opening round opponent, Andrew Douglas of Churchill County High School, in the first round.

This would be Vega’s only win of the tournament as he was upset in the semifinal round where he received his first loss of the season – a second-round pin by Blaze Jones of Elko.

In the consolation bracket, Vega was defeated in a 13-4 decision by his opponent from Lowery High School.

Pahrump Valley sophomore Gunner Cortez came into the tournament as one of four undefeated wrestlers for the Trojans. Unfortunately, he was the only Trojan that came out of the tournament with that perfect record still intact.

“This is everything I’ve ever worked for,” Cortez said of his state championship win. “My entire life has kind of been built to win state. I was most happy to see my mom when she came up to give me a hug.”

Cortez won all three of his 132-pound matches with pinfalls in the first round, including the state championship match which he won with just one second left on the round’s clock.

Cortez’s dream was to set a record and be the first 4-time state champion at Pahrump Valley. Unfortunately, due to there not being wrestling his freshman year because of the coronavirus, he won’t be able to achieve that. But he’s still got his eyes set on being a 3-time state champion.

Brennen Benedict had a different outcome for his matches along the way.

In his first match of the 138-pound division, Benedict was tied at three points apiece with his opponent from North Valleys High School. Following a restart, Benedict was able to secure a takedown with just one minute left in the match to take a 5-3 lead. He went on to win the match 5-4 after his opponent was awarded a point due to him stalling.

Benedict won his second round match-up with another close victory, however, this time he didn’t wait until the last minute to take the lead. He finished the semifinals match with a 5-3 decision to advance to the state championship match.

In the final round, Benedict showed what true toughness is about. It’s not always about physical toughness, sometimes it’s more about being mentally tough.

Even though he was down big on the scoreboard, Benedict fought through a near-injury when his opponent twisted his arm to the point of yelling coming from the mat causing a stoppage by the referee to make sure he didn’t have a broken arm. Benedict was able to power through the near-injury and finish the match.

He ended up dropping the match in a 10-3 decision, but he finished with a silver medal and a state runner-up.

“They put in the time,” Trojans head coach Craig Rieger said of Cortez and Benedict. “They have a lot of savvy out there and a lot of experience. They’ve done a great job. I know they’ll be back strong next year. They had a great year.”

Senior Trojan Colby Tillery went into the state tournament with an undefeated record in the 145-pound division.

In the final round, Tillery lost by a 13-2 decision to his opponent from Spring Creek. This match again had a stoppage because at one point in the match, Tillery went unconscious from a choke and he had to receive attention from his coaches.

Tillery showed the same mental toughness that Benedict showed and continued with the match. He would finish as the state runner-up and receive a silver medal.

“He’s been a leader,” Rieger said of Tillery. “Colby’s been a good leader where the boys have looked up to him all year. He’s done a great job for four years for us and he’ll be missed.”

The last of the medalists for the Pahrump Valley Trojans was Tannor Hanks in the 220-pound division.

Hanks was another one of the Trojans who came into the tournament with an undefeated record.

After securing a win via pinfall in his quarterfinals match, Hanks was pinned in the semifinals match and sent to the consolation bracket.

There he won both of his matches with second-round pins and received a bronze medal for his third-place finish.

The Trojans wrestling team as a whole finished in seventh place for the tournament with a team score of 80 points. However, they were awarded an academic state championship for the team’s cumulative GPA in school.

“We’re going to be all right next year,” Rieger said. “I think, seeing the state tournament, they’ll know what it takes to be successful next year.”