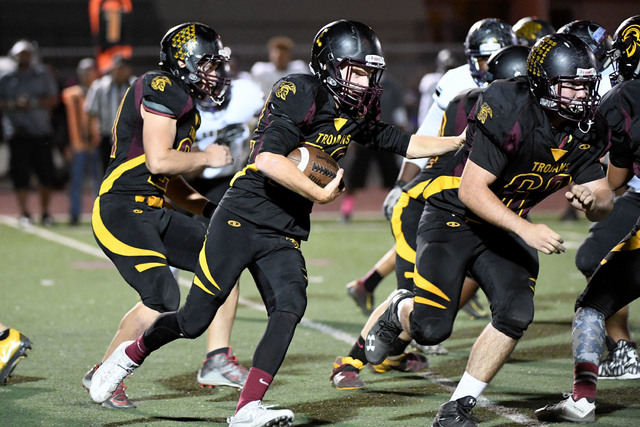 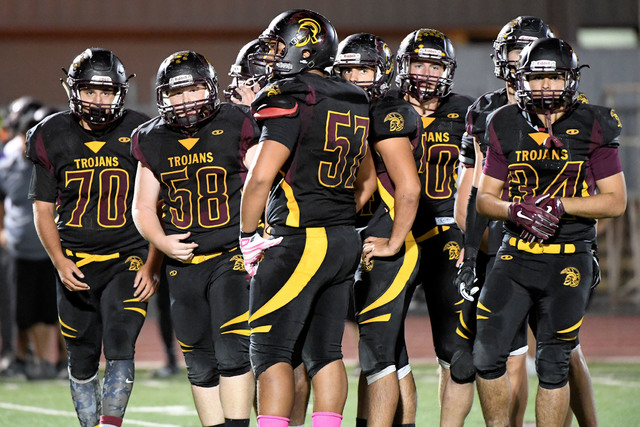 Peter Davis / Special to the Pahrump Valley Times The Trojans line wait for a play to be brought in. Behind their blocking, the Trojans running backs scored three touchdowns in the come-from-behind win against Sunrise Mountain on Friday.

Football is often about making adjustments at the half. Those that make the right ones, win. And on Friday the Trojans did just that.

Trojans running back Drew Walker’s 15-yard touchdown run with one minute and 54 seconds to go in the fourth quarter was enough to edge Sunrise Mountain 35-33.

The Trojans scored three touchdowns in the fourth quarter in just 11 minutes due to adjustments at the half.

Pahrump knew going into the game that to win they had to play their game of football, minimize the amount of penalties and turnovers. The Trojans had a slow first half but stuck to their game plan, and did just that.

But it was all Sunrise Mountain in the first half. The Trojans were only able to score on a Case Murphy TD run and a Joey Sladek field goal, while Sunrise Mountain scored three touchdowns to lead at the end of the half, 21-10.

At the half the Trojans made their changes.

Trojans coach Joe Clayton said assistant coach Mike Colucci noticed that the Trojans were having success on the jet sweep run to the right-hand side.

“Colucci used the word ‘tenderizing’ in reference to what our blockers were doing to the right side,” Clayton said. “And so we ran that in the second half and at the end of the game we ran that play 12 times in a row.”

The Miners defense had a tough time stopping Pahrump in the second half. But Pahrump had problems stopping the Miners offense in the third.

The Miners started with the ball on the Trojans 45-yard line at the beginning of the third quarter after a squib kick by Pahrump. They then marched down for another TD to make the score 27-10.

Pahrump then started the half on their 34-yard line and marched down to the 14-yard line. Nico Velazquez had a 14-yard TD run to make it 27-17 (the kick was good). But for every score in the third quarter, the Miners answered with one.

Sunrise Mountain scored again, took the ball down the field and then scored on a 19-yard TD pass, 33-17. It looked bleak for the Trojans.

Pahrump took over on their 44-yard line with just 2:30 left in the third. The third quarter ended and the Trojans had the ball first and 10 on the Miners’ 20-yard line. Pahrump took the ball down to the three-yard line and ran the ball into the end zone and there was a fumble, but Jesse Dillon recovered for the TD, to make it 33-23, with the Miners still leading. That was Pahrump’s first score of the fourth quarter.

This is where the Trojans made another critical adjustment. The whole game the Trojans refused to kick it off to the Miners returners and this gave them great field position most of the game.

“In our last two kickoffs I just felt we should let Joey (Sladek) kick it away,” Clayton said. “We really couldn’t do any worse.”

The Trojans kicked it deep and this gave Sunrise Mountain the ball on the 18-yard line.

The Miners had the ball third and 11 on their own 17-yard line, Sunrise Mountain passed the ball and the Trojans’ Cory Bergan intercepted on the Miners’ 38-yard line. Pahrump capitalized on the interception, scoring their second TD of the fourth quarter on a Drew Walker TD run to make it 33-29. The Trojans were within one touchdown.

The Trojans then kicked it deep again.

Pahrump’s defense then made Sunrise Mountain go three-and-out and Pahrump took over on their 29-yard line.

In the last three touchdowns the Trojans relied on the blocking of freshman offensive tackle Zach Trieb and junior offensive guard Jeremy Albertson to “tenderize” the defensive line of Sunrise Mountain.

“In the end we just kept to our blockers,” Velazquez said. “We knew we had to do a good job and score.”

“Our linemen made it easy for us,” Walker said.

“I am just glad that coach Clayton had the confidence in us,” Albertson said. “I had no doubt we could do it.”

Joey Sladek then booted the ball into the end zone and this meant the Miners had to go 80 yards for the win.

In their last possession the Miners only needed a field goal to win and still had 1:54 to get within field goal range and it looked like they could do it. With just 42 seconds remaining they marched down to the Pahrump 35-yard line.

On second and 4 they went for the TD and passed to an open Miner receiver on the two-yard line. The ball was incomplete, but the Miners were penalized for offensive pass interference and this backed them up to the 45-yard line and more importantly out of field goal range. The Miners then threw three incomplete passes and Pahrump (4-3, 1-2) got the win.