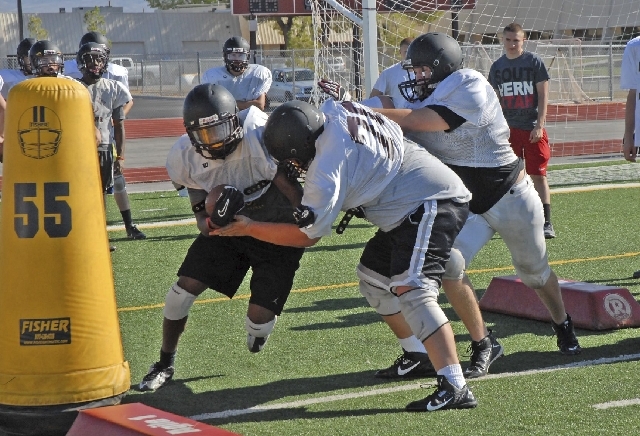 Trojans football is in full swing with pads as they get ready for a scrimmage against Valley High School in Las Vegas on Saturday at 11 a.m.

The Trojans staff will use the trip into Vegas to also scout Chaparral, which has a scrimmage earlier in the morning.

Chaparral will be the opening home game for the Trojans next Friday at 7 p.m.

Trojans Coach Joe Clayton said he is excited about the opening game and announced his decision for the starting quarterback.

“AJ Segura will be the starter either way and when AJ is not quarterback, he will not come off the field,” Clayton said. “He will be somewhere else on the field because he is such a great athlete. It gives us another thing on offense because he will be a running back.”

Sophomore backup to AJ, TJ Milk, is out for two weeks.

“He had fluid in his shoulder. He has been sidelined for a bit. Originally we thought it was a fracture of his growth plate and that would have been a season ender, but we got good news from the results of the MRI. It said he has fluid and that just means a couple of weeks out. So, depending on how that goes, the plan is he will get reps when he is healthy,” Clayton said.

With Segura graduating this year, the coach wants to give Milk as much reps as quarterback as he can.

Clayton feels the Trojans are way ahead of the game this year.

“Comparing where we were last year and this year,” he said, “we are way ahead because we did not go to camp last year. Going to the camp this year and having the boys have success built on their confidence. Going into summer workouts it just carried on from there.”

Another aspect the coach said made a difference this year is attitude.

“The biggest thing is player attendance. We have had our entire varsity team here just about every day,” he said.