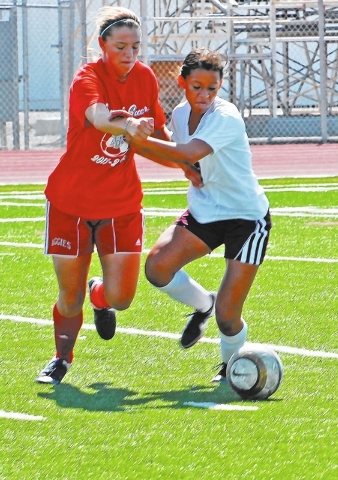 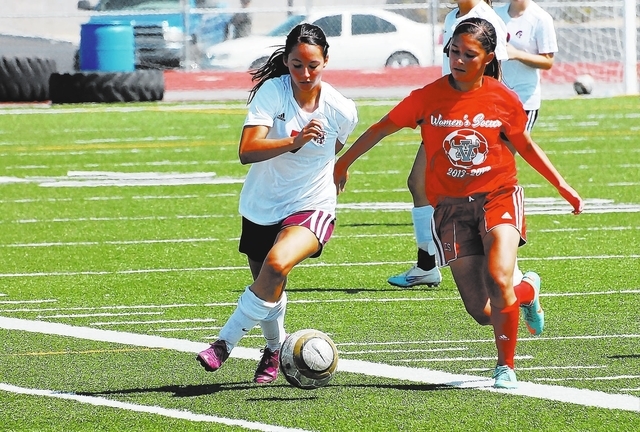 Senior Sydney Sladek has not skipped a beat since scoring over 70 goals last year. The Trojans soccer machine seems to be unstoppable as she scored against the Arbor View Aggies with just three minutes remaining on the clock Tuesday afternoon to put the game on ice, 2-0.

Sladek’s free-kick goal was made in the second half with the Trojans leading 1-0. Trojans’ Coach Pam Larmouth was amazed by the kick and goal.

“The 60- to 65-yard free kick by Syd Sladek was absolutely amazing. I still have chill bumps from that awesome goal. You can go many a year without seeing such a great shot,” Larmouth said.

The first goal was by sophomore Gabriella Vasquez who put the ball in the net assisted by Sladek just 70 seconds into the second half.

Play was a non-conference game scheduled by Larmouth to keep the edge of the team sharp. Larmouth feels in order for the team to be ready for conference play, the girls must play some strong contenders. The Aggies were Divison 1 state champs last year. The two teams had met earlier in a practice game where no official score was kept, but fans scored the game 3-2 Aggies.

The Trojans team was assisted by the return to the playing field of defender Brittany Klenczar who was sidelined by a bad meniscus in her left knee. Surgery put her out for six weeks and Arbor View was her first game back. Her coach was very pleased to have her on the field.

“Britt played 15 minutes the first half and did well, she commented that she was out of shape,” she said. “The second half she played almost the entire half and was outstanding. She was out of breath and doing some huffing and puffing but she never stopped defending her goal. She is a true defender whose game is all about stopping the opposing team’s progression and moving the ball forward. She is able to move up and play into space very well and we are extremely happy to have her back.”

Trojans assistant coach Joe Sladek said earlier that games and practices were not the same with Klenczar sidelined.

The Lady Trojans were assisted on defense by the outstanding play of goaltender Kiaya Nauck who made four saves to aid in the shutout. The team has been looking for a replacement for Kaitlin Klem who was an integral part of the the back four defensive line. Larmouth said Ashlyn DiBlasi maybe the replacement, but the situation is “still fluid.”

Haley Sladek’s old position as midfielder is also still up for grabs as the Trojans tried Rosa Ortega and Winter Young-Chaffee.

The girls will be in action next on Sept. 12 at home against Vo-Tech at 3 p.m.

The Trojans boys soccer team has played four games in the past week. They were at the Mesquite Cup over the Labor Day weekend and played three games, winning two and losing one. They beat the Coronado junior varsity 2-0, and beat their own JV 7-1, in the tournament for two victories, but lost to the Virgin Valley team 7-0.

In soccer, playoff games are the only games which can’t end in a tie.

Ramon Sanchez, Jason Runnion and Raul Maldonado each had a goal and an assist to lead the Trojans, who scored four unanswered goals to take a 5-4 lead. Teammates Nico Cipollini and Nolan Toomer added one goal apiece.