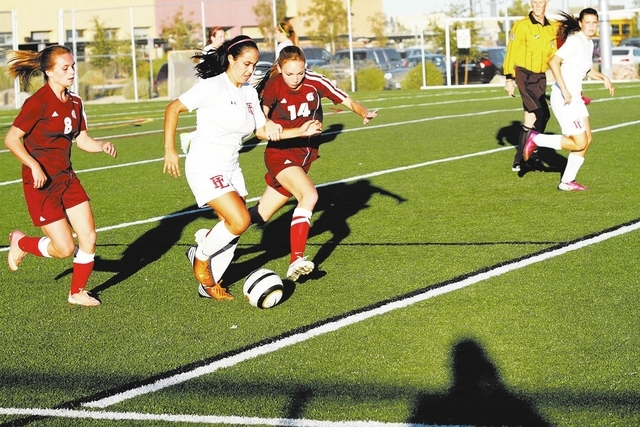 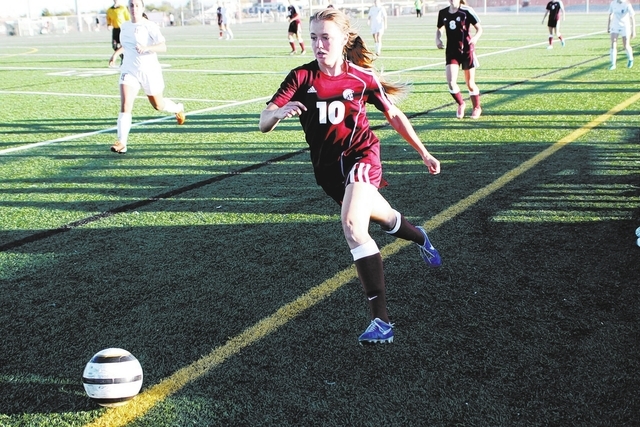 Normally when Trojans soccer player Sydney Sladek scores more than two goals against Faith Lutheran it means the game goes to the Trojans, but this time it took the silent shooter, Courtney Lindsay to deal the death blow in the Trojans victory of 3-2.

Larmouth said Faith came out hard in the second half.

“We never thought that we had the game wrapped up at that point because Faith was playing so hard,” She said.

Having a 2-0 lead in the second half is hard to defend said the coach because the natural reaction is to relax a bit and when you play Faith Lutheran you can’t relax. Midway through the second half the Faith offense finally found a weak spot and scored two goals to tie the game up, but the Trojans were not done.

“Syd was in the box getting ready to score and was pushed from behind and so we received a penalty kick that Courtney put in for us,” Larmouth said. The score gave the Trojans a 3-2 victory over Faith.

The bottom line is these two teams will see each other again. The Trojans beat Tech 8-0 and they are the Sunrise League’s best team at 12-0 in league and 14-3 overall. Tech beat Moapa 10-0. The Trojans should beat Tech and Moapa.

Rest assured, Faith will play the Trojans on Saturday at Heritage Park at 10 a.m. for the regional championship.

“Faith’s coach is a great coach and he films all our games and has the girls play according to what they observed during regular season. I don’t think we will change much for regionals. While we want to win that title, State is the title we are working toward. We are just glad everyone was healthy and available for the game,” Larmouth said.

The PVT asked the above question just before the Trojans played Faith for the state title last year and got the same response. The Trojans did change their game plan last time and so expect the Trojans to change up their game, just to mess with Faith, guaranteed.

The Trojans faced Moapa in their first playoff game of the new season and had no problems dispatching the opposition 15-0. Sladek, the Trojans top gun, scored nine goals in the lopsided contest. Moapa Valley could do nothing to stop the Trojans march to the regional championship.

In the first 12 minutes of the game, Sladek scored 3 goals. Gabby Vasquez added two goals, and Brittany Klenzcar, Lindsay, Jennifer McCaw and Amy Estrella all contributed to the slaughter.

The girls finished the regular season 11-0-1 in league and 14-0-2 overall. Sladek finished the year with 61 goals and 25 assists. Kristen Young and Paige Chaffee both sisters were tied at 11 goals apiece.

Pahrump will face Cheyenne (14-3) at 4 p.m. today at Heritage Park and then will play for the championship on Saturday.