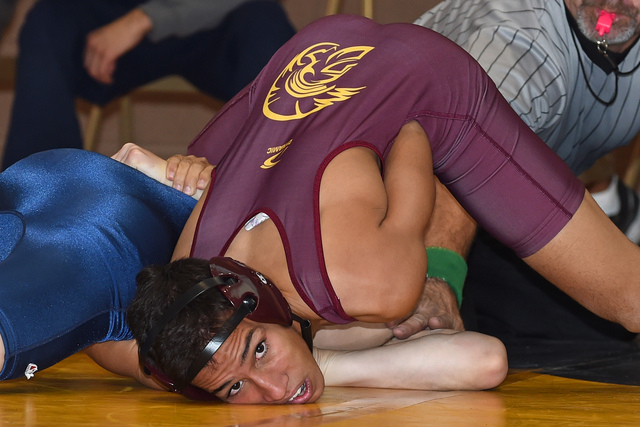 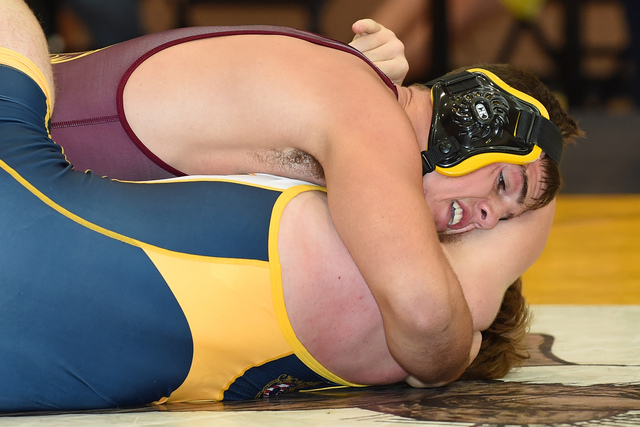 The Trojans varsity wrestling team started the season in great style at the Boulder City High School Duals on Saturday.

The Trojans earned third place of the eight teams attending, including one team made up from extra wrestlers. Indeed, Pahrumpians can expect great things from these Trojans this year.

The Trojan grapplers started the duals with a strong victory of 75-6 over the extra team. From there, they soundly beat Legacy High School 65-15. After Legacy, the Trojans faced a very strong Desert Hills from St. George, Utah losing 22-39. Pahrump then wrestled Boulder City, the second place team of the other half of the dual’s teams, beating Boulder City 44-27.

Trojans Coach Craig Rieger said the Trojans wrestled well on their feet and will focus more on performance while on the mat. He was very pleased with the Trojans’ first bouts, including their matches with Desert Hills. He said 195-pound Jax Clayton’s and 220-pound Jeremy Coates’ only loss at the duals was to Desert Hills opponents who were Utah state champions last year. At 182 pounds, Jonathan Corrow’s only loss was to Desert Hills’ third at state last year. He added, “There’s no shame in losing to a good quality wrestler.”

Rieger said sophomore 113-pound Nathan Trudeau and 126-pound John McDonald earned their Varsity letters at the duals for their wins.

When asked about who on the team has shown the greatest improvement this year, Rieger said, “Joseph Zarabozo at 106 pounds. He went 4-0 (at the duals). He did a good job and has really worked to change it around.” The coach added 120- pound Geno Guseman, 145-pound Sam Brophy, and 170-pound Samuel Tucsnak also wrestled 4-0 at the duals. Guseman, a junior, moved from Palo Verde High School in Las Vegas.

Rieger said some of the varsity wrestlers in the different weight classes might change as the start of the season solidifies. This happens due to athletes’ added weight due to growth, a loss of weight, or one wrestler excelling over another in the teams’ individual weight classes.

Joseph Zarabozo, a senior at 106 pounds, was 4-0. Zarabozo started the duals for the Trojans by leading off with a pin of his opponent in 12 seconds; he pinned his second opponent in 4:49; he won his third match by forfeit; and beat his fourth opponent by 10-6 decision. Last season, Zarabozo had an overall record of 11-16.

Nathan Trudeau, a sophomore at 113 pounds, was 1-3. He beat his first opponent with a pin in 39 seconds. Trudeau earned his varsity letter with this pin.

Geno Guseman, a junior at 120 pounds, was 4-0. He soundly beat all four opponents with quick pins of 41 seconds, 22 seconds, 1:06 and 1:23. Guseman started this year having come from Palo Verde High School, Las Vegas.

John McDonald, a sophomore at 126 pounds, was 1-3. He beat his first Boulder City opponent by decision 8-6. McDonald earned his varsity letter with this decision.

Antonio Sandoval, a junior at 132 pounds, was 3-1. He won his first two matches by forfeit; he lost his third match by major decision of 15-0; and he won his fourth match with a pin at 5:33. Sandoval is an accomplished wrestler, having placed fifth at region last year and finishing the season with a record of 20-16.

Sam Brophy, a senior at 145 pounds, was 4-0. He won his first match by forfeit, his second match with a pin in 27 seconds, his third with a 16-12 decision, and his last with a 6-4 decision in overtime. Brophy is another accomplished Trojan wrestler with a 2013 record of 25-14, placing fifth at region and narrowly missing the state tournament.

Gage Moore, a senior at 152 pounds, was 0-4. Moore had very tough opponents and will hopefully get his chance to prove his wrestling abilities as the season progresses.

Garrett Monje, a sophomore at 160 pounds, was 2-2. He beat his first opponent with a pin at 34 seconds and his second by forfeit. He lost his third by major decision of 9-18 and his fourth by a pin.

Jonathan Corrow, a senior at 182 pounds, was 3-1. He beat his first opponent with a pin in 14 seconds and his second opponent with a technical fall by 20-4. He narrowly lost his third match by 1-3 to a Desert Hills opponent who won third at Utah’s state tournament last season. Corrow is another veteran Trojan wrestler who narrowly missed placing at state last year and finished the season with a 30-9 record.

Jaxon Clayton, a senior at 195 pounds, was 3-1. He won his first match by forfeit and his second by a pin 1:37. He lost his third match by a painfully close 5-7 in overtime to a Desert Hills opponent who won first in Utah’s state tournament last year. Jaxon was still strong enough to pin his fourth opponent in 1:56. Jaxon is another Trojan veteran, having placed third in state tournament last year and closing the season with a 41-7 record.

Jeremy Coates, a senior at 220 pounds, was 3-1. He beat his first opponent with a pin in 34 seconds and won his second match by forfeit. He lost his third match by major decision of 5-13 to a Desert Hills opponent who took first at Utah’s state tournament last year. Coates came back strong to beat his final opponent by a pin in 36 seconds. Coates is another powerful Trojan wrestler, having placed fourth at state last year and finishing the season out with a 30-9 record.

Jace Clayton, a senior at 285 pounds is a heavyweight. He was 3-1 and he beat his first opponent with a pin in 2:43 and won his second match by forfeit. He suffered a terrible 4-8 loss to his Desert Hills opponent and beat his final opponent, Boulder City, by 7-4. Jace finishes the Trojan weight classes as an accomplished veteran wrestler. He placed second in the state tournament last year and finished the season with a 38-8 record.