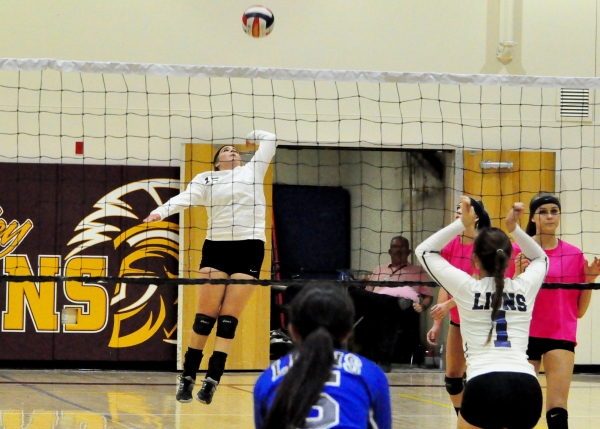 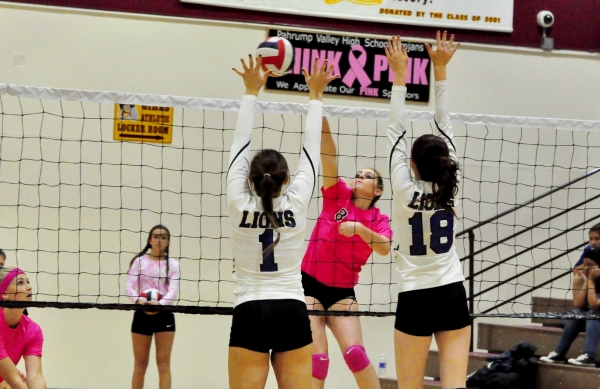 Pahrump Valley beat Spring Valley on the road on Wednesday. It was by far not the easiest win of the season.

“We started off shaky,” the coach said. “I had to deal with the drama before the game of one player leaving her uniform in the car, and another player was just totally lost for two sets. I gave them a pep talk though, stepped back and Lauren Koenig and Jill Smith did the rest.”

This win sets up the all-important road game on Monday against Mojave (7-4 overall, 6-3 Sunset League).

Harris was excited about her team’s win against the Grizzlies (6-7, 5-4). The Trojans had lost to Spring Valley in a close match at home.

“We were ready tonight for number 11 (Jessica Rafay), who swings like nobody’s business,” she said. “We needed this win. Mojave will be a big game. Lauren Ashford played a great game. She was directing traffic from the back and we played well as a team, communicating well.”

According to the coach, Smith led in hits and Ashford in digs. The girls outscored their opponent 103-101.

Pahrump (10-13, 4-5) is playing for a playoff spot and all season long Harris has been waiting for the girls to believe in their abilities. The Spring Valley game was big and the Mojave game at home on Monday at home at 6 p.m. will be bigger.

A Trojans win against Mojave could put the Trojans in third place. Mojave has to play Pahrump, Sierra Vista, Spring Valley and Faith Lutheran, while after Mojave, Pahrump will have Clark, Cheyenne and Faith Lutheran left.

Spring Valley will have Sierra Vista and Mojave to play.