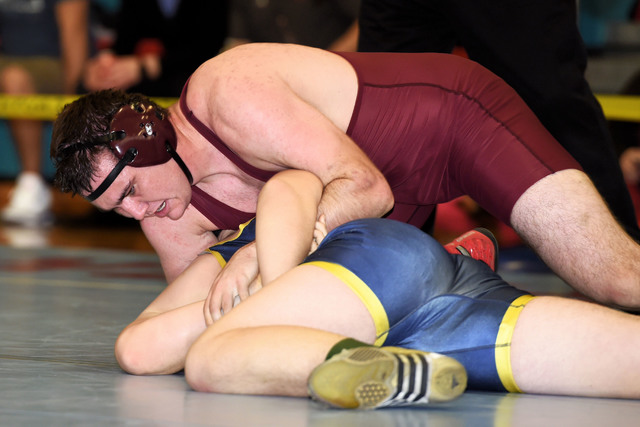 Jeremy Albertson, seen at Western High School at the Class 3A Southern Regional championship was the only medal winner, finishing in fourth place at state for the Trojans. This year the Trojans sent seven, traveling to Reno for the state tourney on Friday and Saturday. Peter Davis* / Special to the Pahrump Valley Times 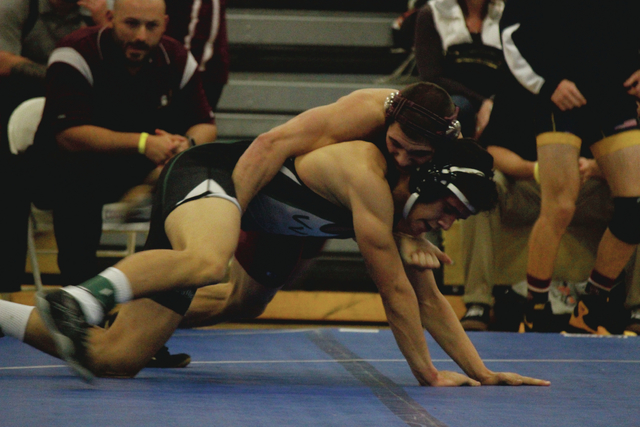 Junior Dustin Rily (152 pounds) is seen at state in Reno last weekend. Although Rily didn’t medal at state, he will return next year as a senior to lead the Trojans with that experience. Tony Eriquiaga / Special to the Pahrump Valley Times 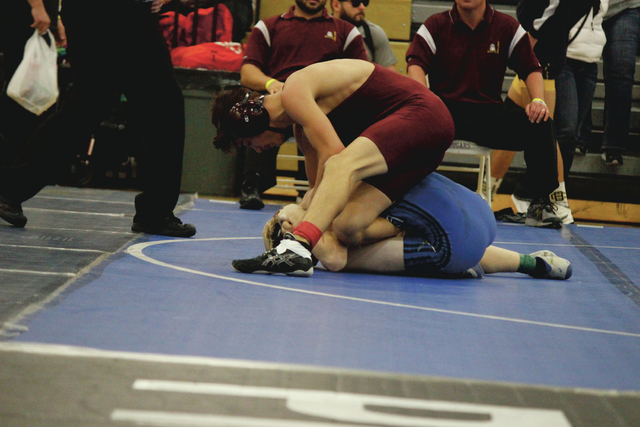 The Trojans grapplers got one medal winner out of the seven that were sent to state in Reno on Feb. 10-11, and finished 13th out of 18 schools with 10 points.

Junior Jeremy Albertson (195 pounds) was a third-place seed and finished in fourth place at the state tourney and was the only medal winner for the team. He went up against sophomore Ryan Vanario of Boulder City and was pinned at 43 seconds.

Trojans coach Craig Rieger had a young team made up of juniors and sophomores and was happy to send the seven to the state tourney this year.

He looks at the whole regional and state tourney experience as a feather in their cap.

“I actually wished we sent more sophomores just so that they could experience it,” Rieger said. “All seven were like, whoa…it was good learning for them. They realized they have to do the work. Our wrestlers ran into some strong wrestlers at state.”

The Trojans wrestling program will be in good shape according to Craig Rieger, if all the wrestlers that wrestled this year return to the program next year.

One other Nye County wrestling team went to state. The Class 2A Muckers sent 12 wrestlers to state this year, finishing the year as the Class 2A Southern Regional Champions. At state, the Muckers had four medal winners and the team finished in fourth place overall with 71 points.

Then freshman Dillan Christianson Lopez (113) won his third-place match over freshman Marco Monroy of Spring Mountain by pin in 2:54 and senior Jordon Berkowitz took fourth place, losing to sophomore Davis Murphy of Pershing County by decision 3-0 in the third-place match.