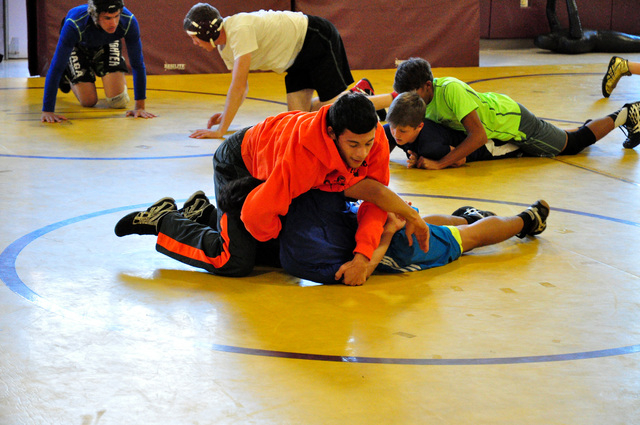 Last year was a great year for the Trojans wrestling team, for they sent 11 wrestlers to the state tourney. Most of those wrestlers will be returning this year and so the Trojans are looking forward to a promising year.

Trojans Coach Craig Rieger said this year the team will have a lot of depth from the middleweights to the heavyweights and in these classes are where the bulk of his team’s experience lies.

“Wrestle-offs start today,” Rieger said. “A lot of the team changed weight classes. Abraham (Preciado) moved up to 220 from 195. Some of these guys will be doubling up because they got bigger. Gundacker might be going up to 138 from 120 pounds. The problem I have is that they are all great wrestlers but now we have two at the same spot in quite a few places.”

The doubling up that Rieger described only makes the team stronger. The wrestle-off process is treated like a regular match. This means the best wrestler will be competing at that spot for the Trojans.

Rieger is concerned with the lower classes where a lot of new faces have come in.

At 106 Joeseph Zarabozo returns with much needed experience for the lower weight classes and he has no competition in his class. At 113, PVHS will have freshmen going for that position, Jacob Sawin and David Rola. At the 126-pound class, a new wrestler from Palo Verde moved to Pahrump, Gino Gusman. He will wrestle off with Logan White. Then from 132 up Rieger said he was loaded.

Gundacker could very well wrestle Nick Nelson, both are solid wrestlers at the 138-weight class. Nelson and Gundacker both moved up in class from last year. Both went to state. John Clark at 152 pounds will be wrestling off with Case Murphy and Carlos Ortega. At 195 Jax Clayton will be going up against Jose Alaniz. Then at 220, Jeremy Coates will be wrestling with Abraham Preciado.

Rieger says the Division I-A is different this year with two new teams. He said Faith Lutheran is always a contender, but then there is Spring Valley, who is new to the division and brings good coaching and solid wrestlers to the mix.

“Spring Valley was second in state last year. We have seen them, but we never wrestled them. They are well coached and we will be watching them,” Rieger said.

The other school that Rieger will be watching out for is Virgin Valley, who wrestles on the Sunrise side.

Gundacker has now gone to state two times and this year being his last year, he wants a win at state. His two times at state have taught him that he had to learn some new skills to be competitive at that level. In his junior year he learned he would need to work on his stand-up game.

“I learned at state that nothing will be given to you and you have to work hard for everything,” he said. “If you can’t pin a guy when you are on top, it will go to standup. A lot of the championship wrestlers are usually really good at standup. So this is what I will improve the most. I plan on also taking my time and not rushing the match too much.”

He regrets only one thing from state.

“There was this kid I faced and beat him really bad in regionals, but when I faced him at state I lost to him. I think one reason I lost was I chose neutral instead of the top.

This year Gundacker will try 138-pound weight class in the first tourney and if that doesn’t feel right with him he will move up to 145 pounds.

Jace Clayton also went to state two years in a row and wants a win this year at state. He said he will work on his stamina this year. He will be running a lot and doing more cardio workouts.

“I think I was dead at the end of matches at state,” Jace said. “I am also going to work on my quickness and shots because I was going all upper body, shooting at legs and sweeping.”

He thinks when he went to state his sophomore year he wasn’t ready for prime time. His junior year he did better.

“Last year I tripped and the guy got on top of me and beat me on points,” he said. “In that match, if my footwork was just a little better, it would have been a closer match.”

Coates also went to state last year and is ready to win. He said he will work on improving his record this season.

“I want to definitely do better earlier in the year to improve on my seed because that really matters in state,” Coates said. “I had to go up against the number one seed last year and that was a tough match. So this year I want to get the first seed and hopefully have and easier ride to the finals.”

Of course, before he can set his sights on state he must take care of business at home and this means beating his contender for the 220-pound spot, Abraham Preciado.

“I will have to go up against Abe Preciado and that is usually back and forth between us,” he said. “The 220-weight class will definitely be solid, whoever it is. When I do wrestle Preciado, I will have to do the basics and not make any little mistakes, and not give him anything.”