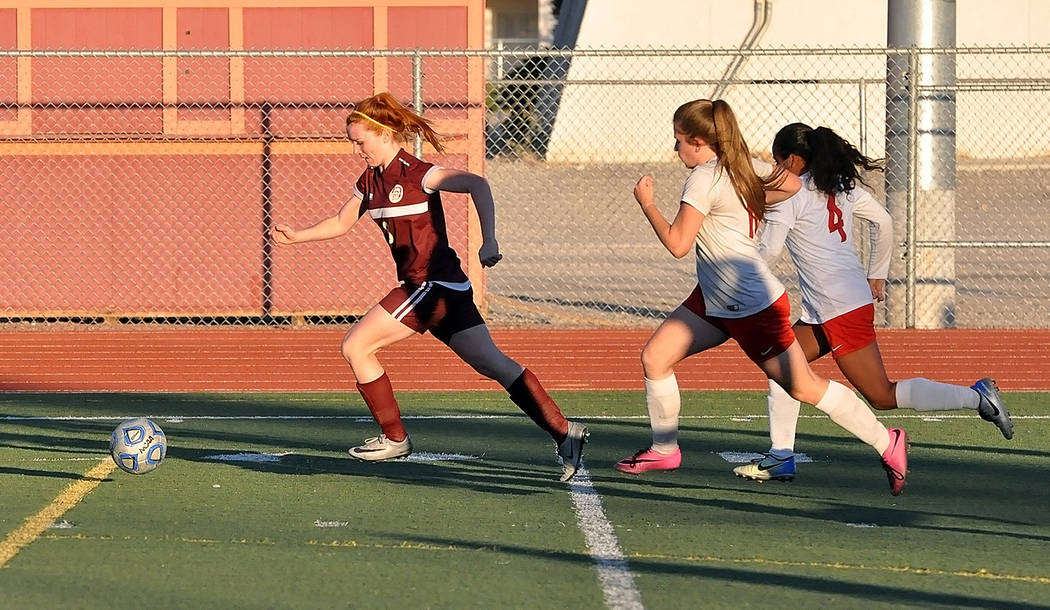 Horace Langford Jr./Pahrump Valley Times Sophomore Makayla Gent outruns two Valley defenders during Pahrump Valley's 4-0 win over the Vikings on Oct. 17 in Pahrump. Gent led the team in assists with 12 and tied for the team lead in scoring with 36 points. 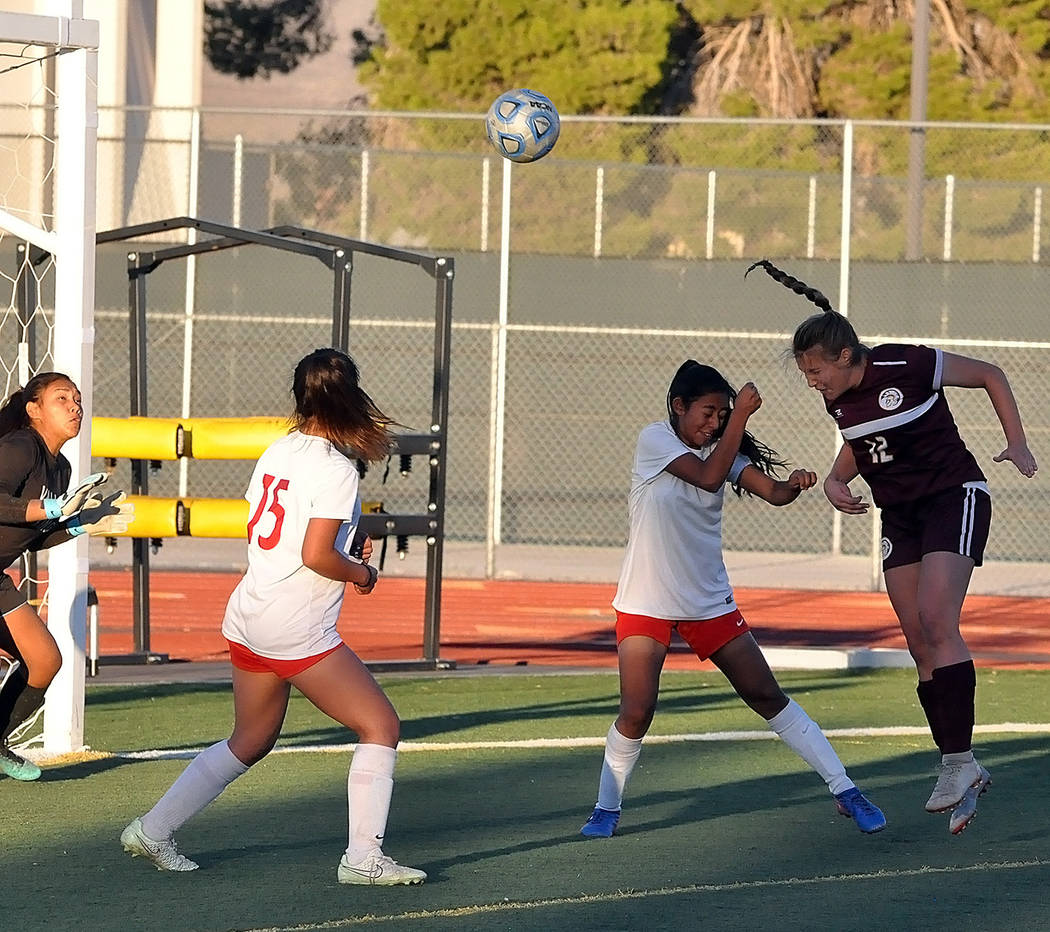 A year ago, the Pahrump Valley girls soccer team’s dreams of a first state title since 2012 were ended by Truckee in the Class 3A state semifinals. And when the Trojans found the Wolverines would be their opponent in this year’s semifinals, they knew what they would be up against.

Which isn’t to say they expected what happened.

Senior Ava Seelenfreund scored on a penalty kick four minutes into the game and finished with a hat trick and an assist to lead Truckee to a dominating 7-0 victory over Pahrump Valley on Friday night at the Bettye Wilson Soccer Complex in Las Vegas.

The Wolverines went on to claim the state title Saturday with a 4-3 win over South Tahoe, which had eliminated the Trojans’ Sunset League rival Western 2-0 in the other semifinal.

“That is exactly what Truckee was like last year,” Pahrump Valley girls soccer coach Julie Carrington said. “We knew what we were coming against. Their passes are on point. They’re right there, they know exactly what their teammates are doing, and we were just a little slow.”

It was a stunning display against a Trojans team known for its defense. Pahrump Valley had recorded 10 shutouts this season in compiling a 16-5-1 record, allowing more than four goals only once, in a 6-0 loss to Class 4A Green Valley.

“They still had a really good attitude about it even after a couple of scores,” Carrington said. “It’s a great team. They know they work hard to try and get where they’re at today, and they came far a couple of years in a row. So I’m really proud of them.”

The fact the Trojans were a bit banged up didn’t help.

“We were down one girl (all-Sunset League defender Juliana Hemphill) because of a head injury, and that changes the whole dynamic,” Carrington explained. “We had to take our striker (all-region senior Kimberley Ramos) and throw her on defense. And she’s our top striker.”

Carrington noted the Wolverines’ roster was studded with experienced players, players who were a little older, a little bigger, and a little faster than the younger Trojans. Truckee has seven seniors and eight juniors on its roster.

“We had a lot of young ones, while they had a stronger core of a varsity team,” Carrington said. “Coming with a predominantly 10th-grade team, they did well. It’s good experience for them.”

Junior keeper Hannah McElheny did have a couple of nice saves, including one in which she went high to deflect a shot over the top of the goal. But the Wolverines, who finished 20-5, were just too good.

But if the Trojans were devastated by the outcome, it was hard to tell after the game. There was no anger, no tears and no hanging of heads. Carrington’s message that winning the region championship in what was supposed to be a rebuilding year was a special accomplishment seemed to get through.

“They have class and integrity,” Carrington said. “These girls know they played hard, and I’m just really proud of them. I just tell them we work hard and we don’t have anything we need to be embarrassed about. We should be proud for getting to where we are over and over.”

The Trojans will graduate some talent in May. Ramos led the team with 15 goals, Grace Gundacker posted 10 goals and seven assists, and Halie Souza was fifth on the team with seven goals. But Carrington knows she will have the bulk of her roster back to make another tournament run.