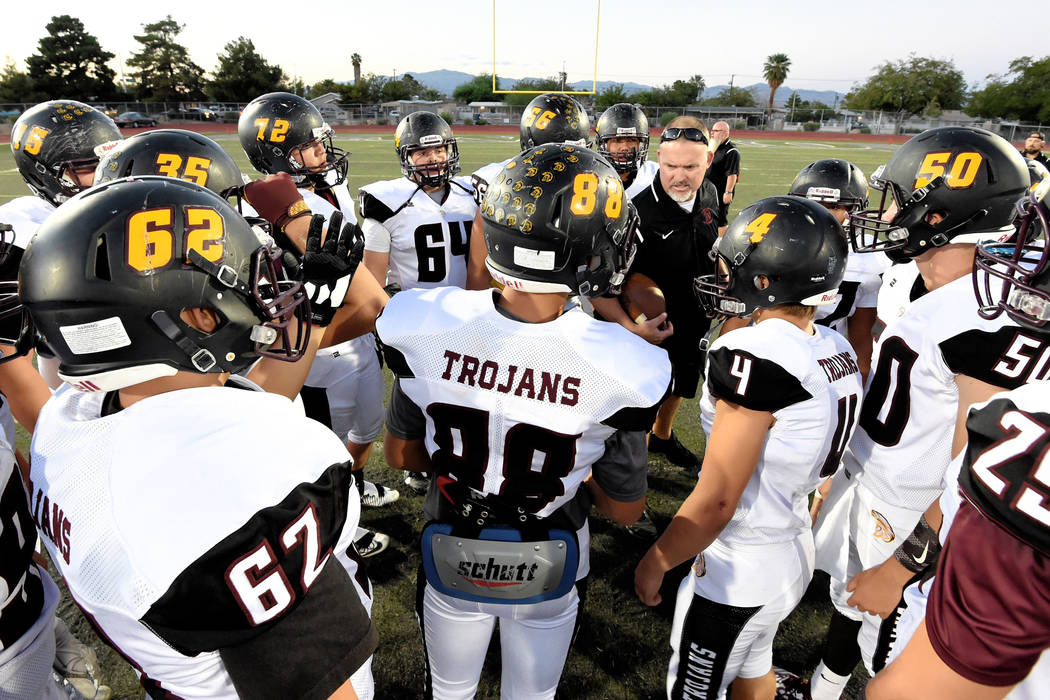 A return visit from Lowry, an opponent new to Class 3A, and a trip to Class 4A foe Coronado, highlight Pahrump Valley High School’s 2019 football schedule, which was tentatively released this week.

The 10-game slate features five home games and five away games, starting with an Aug. 23 Hall of Fame game at home against Lowry, a team that defeated the Trojans in a wild 41-40 season-opening contest last Aug. 17 in Winnemucca.

The Trojans will travel to Mesquite to face traditional foe Virgin Valley before heading to Las Vegas to face Class 3A newcomer SLAM Academy. The Sports Leadership and Management Academy is new to full membership in the Nevada Interscholastic Activities Association and will compete in the Sunrise League. The Bulls won six games as an independent last year, playing mostly junior varsity opponents.

“SLAM is now a full member of the NIAA,” Assistant Director Donnie Nelson said. “It was an independent member for the past two academic years. That’s the basic rule: Pay your dues for two full years to prove you can fulfill schedules, offer at least one boys and one girls sport per season, etc., for two trial years.

Next up is rival Boulder City, which split two games with the Trojans a year ago, each team winning at home. That game will be in Pahrump, followed by a Sept. 20 trip to Coronado High School in Henderson.

“We had to fill in a game, and any time we have that extra hall of fame game,” Clayton said. “We had a bye last year in that spot, but they told us because we had the hall of fame game they didn’t want any teams to have a bye. I’m not sure why.”

The Cougars will have a new coach with a familiar name, as Fred Biletnikoff Jr. replaces Terry Riddle. Biletnikoff, the son of the former Oakland Raiders wide receiver and Pro Football Hall of Famer, brings a long resume of coaching experience, including coaching USA Football teams in world championships in Mexico and China, to a program with just two winning seasons since 2007.

“We’ve had a relationship with Coronado before,” Clayton said. “We’ve scrimmaged them a couple of times and we see them up at the (Southern Utah University) camp. We’re OK with a 4A opponent. They are the largest school in the state, but they’re a team that lost to Democracy Prep last year. They’re not one of the top-tier teams, but they have numbers.”

One negative about playing Coronado during the fifth week of the season is that, unlike last year, the Trojans will not have a week off before the start of Sunset League play.

“We liked having that bye before league as thin as we are,” Clayton said. “It gives us a week to heal, and now we’re playing a big school and the last thing we want to do is get beat up before league starts.”

A year after going 5-0 in the Sunset League, the Trojans will have targets on their backs when league play begins Sept. 27 at home against Democracy Prep.

On consecutive weeks, Pahrump Valley then will be at Cheyenne, home against Del Sol, at Western and home against Valley.