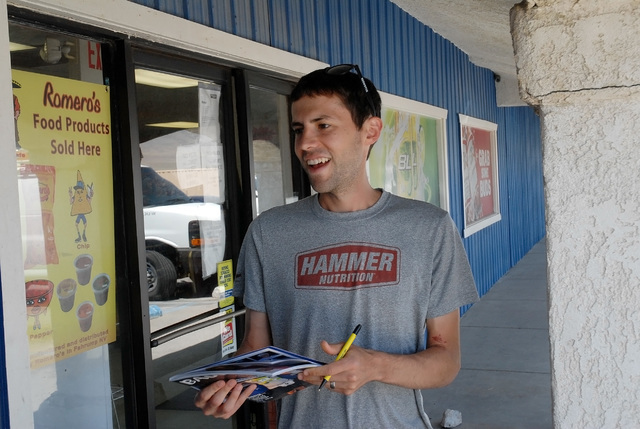 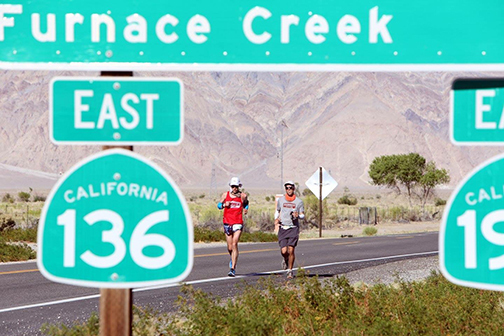 Trasie Phan Special to the Pahrump Valley Times Above, Pete Kostelnick runs with crew member Kyle Clouston. Kostelnick is the 2016 winner of the Styr Labs Badwater 135 joins an elite number of runners that have crossed the finish line in under 24 hours. Kostelnick and 14 other runners have done this in its 39 year history according to Chris Kostman, Badwater race director. 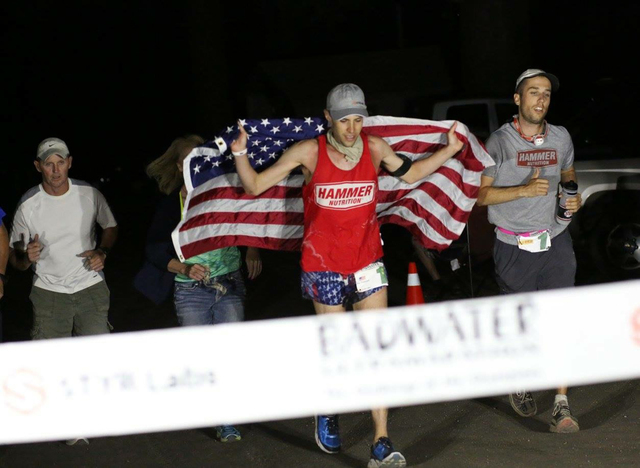 Trasie Phan Special to the Pahrump Valley Times Pete Kostelnick crosses the finish line as the number one runner in the 2016 Styr Labs Badwater 135. A race that takes runners through Death Valley during the heat of summer and then on a 8,000 foot assent up to the Whitney Portal. 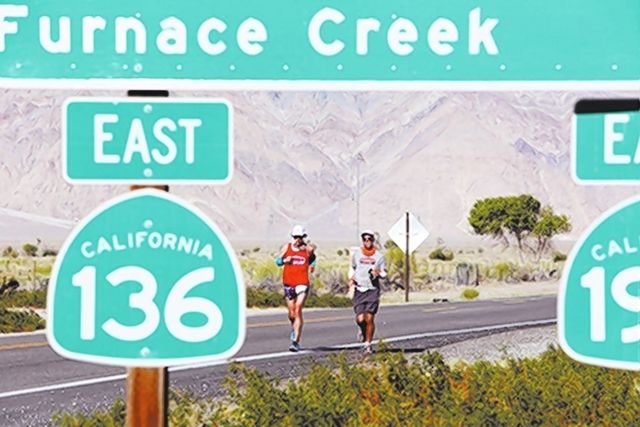 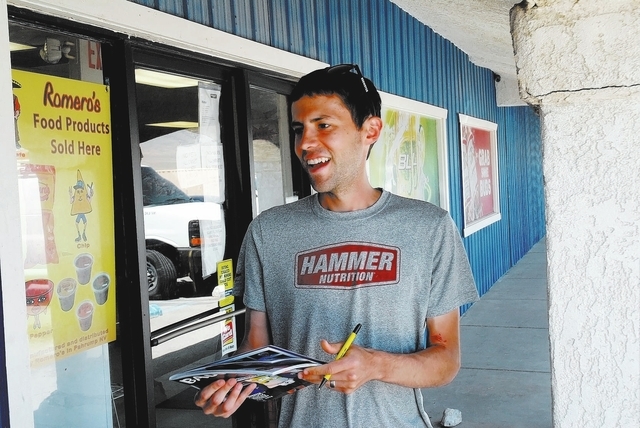 Two years ago nobody even heard of Pete Kostelnick at the Styr Labs Badwater 135, but now with two wins in a row, he has the complete attention of Badwater followers.

He won this years race by over two hours.

Breaking the 24-hour mark for the second year in a row is something only a handful of runners have done, said race director Chris Kostman.

We have now had 14 sub-24-hour finishes, Kostman said. Pete and Alyson (top womens finisher) are world-class ultrarunners, at the top of the field in the USA and are able to compete among the best worldwide.

This truly makes Kostelnick one of the best ultramarathon runners in the United States.

At this years Badwater, Kostelnick got into a rhythm and never looked back.

My strategy is to get out fast, he said. The funny thing is, I was 10 minutes slower this year through Stovepipe Wells. My MO is I do flat very well, so I knew I had to come out strong. A comfortable pace is an 8:15 mile for the flat sections. That is a pace I can sustain for 24 hours.

Last years Badwater took Kostelnick by surprise. He wasnt supposed to win that race, but again he got out in front quick and he said he had improved his workouts.

Each Badwater runner trains differently. Two-time champion Oswaldo Lopez likes to do mountain training in the Sierra Nevada because they are close to his home of Fresno. Kostelnick, living in Lincoln, Nebraska, has no mountains near him so he doesnt do hill training. He trains by putting in the mileage.

In 2013 and 2014, I feel I really turned a page in my fitness, the ultrarunner said. In that time I doubled my mileage and lost 25 pounds and I got more serious.

For Kostelnick, this meant running 150 miles a week. He also took off 25 pounds.

I really dont do any mountain training, he said. I train for the mountain part of this race by not doing hills but by doing high mileage. And I have built up my muscles. He said it makes a difference when he hits the Sierras in his pace.

This year many of his competitors were slowing down to a three-mile-per-hour pace going up the steep mountain slopes, while Kostelnick kept a steady 6.6 mph pace. Kostelnick feels he doesnt have to slow down at all during this part of the race.

While someone is running two-thirds of the mountain and if I am walking half, I can sustain the same overall pace, Kostelnick said. I think that was a big factor. So now when I do some hills I power hike. I can do 12-minute miles when I power hike. So that really helps.

In addition to the tough training, he also had an equipment change. He changed his shoes and now wears the HOKA brand. This brand may not be the hottest item in the stores, but it is popular among ultrarunners. The brand gives him the cushion that he needs to keep his legs from becoming sore during the long race.

Kostelnick now faces the challenge of winning the Badwater race three times in a row, but there is no pressure to win it for a third time, he explained.

I just love coming out here, he said.  I love the challenge in general. Its so long a race you just work at your own pace. Just the challenge in itself and not worrying about the competition is enough. Its fun and I am looking forward to it.

Kostelnick will be doing other ultramarathons and also trying to break a transcontinental record of 46 days. He said this Guinness world record has stood for the last 36 years and he will try to break it on Sept. 12, starting from San Francisco and ending in New York.