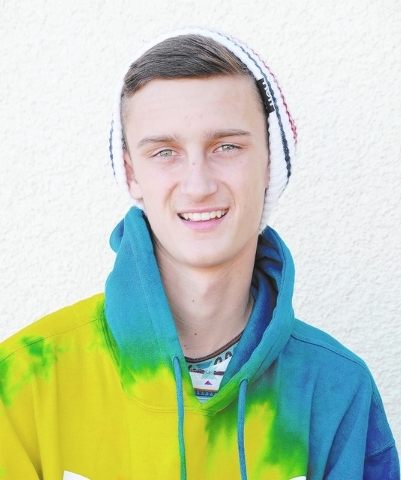 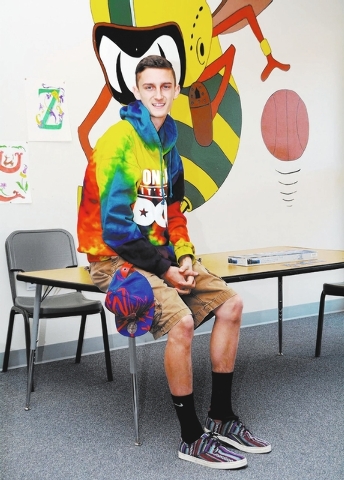 Wyatt Henry is a Beatty Hornets junior basketball player who is making a difference for the Beatty basketball team on defense this year. The six-foot two-inch forward has been playing basketball since the sixth grade and lives in Amargosa.

Henry is one of those players that you can’t really tell is a serious athlete by the way he dresses. His unconventional fashion masks the serious side of his personality.

“He is a good kid. He leans toward his fashion or his taste in fashion. His street-fashion is skinny jeans, saggy ass, hat, and modern t-shirts. Everything that is not acceptable in school. That is everything he wants to wear. He wears Skater and bicycle BMX stuff. He is a good kid. He does well in class and he is respectful,” Verzilli said.

Henry will be the first to admit he looks nothing like an athlete because his manner of dressing is so different. He calls the way he dresses “fashion”, but others would differ with his opinion.

“I love clothes, ask anyone here or anyone on the team. I like putting together my own style. I will stock up on jeans or khakis pants, black or blue. I would throw in some t-shirts and get three types of shoes. My girl likes it a lot. I get comments from my dress. Some will say things because I will wear my pants backwards, mismatch shoes and wear a bright t-shirt. I like to change colors a lot. I don’t like to wear all solid colors. I like to change it up. I have blue jeans on, a tie-dye jacket and a Mohawk right now. I am into tats but no piercing,” he said.

With that being said, he does get comments from the conservative side of Beatty and his home town of Amargosa.

“Some call me a girl or a fag and others ask me, ‘Don’t you know how to dress yourself?’ I think it’s funny that people worry about me,” he said.

After he graduates, Henry hopes to take his fashion sense to college and earn a degree in fashion design and if that means leaving Nevada he is OK with that.

“I want to get a job in fashion design either in Vegas or San Francisco. I am tired of this weather. Right now I am leaning toward Vegas because it is cheaper. If I go into fashion design, I want to go to college for two years. I would rather design clothes. I have my own ideas on what I think would look good. I would like to go to fashion design school and make some money. I am really into Aztec designs, tie-dye and bright colors. I started seeing Aztec designs everywhere and that inspired me,” Henry said.

Henry plays sports because he enjoys them. He really has no plans to play out of high school. He is just out to have some fun. He said an uncle influenced him to play basketball at an early age, but in elementary school it was never serious until he got to middle school. That is when he started to grow.

“I play more basketball than baseball. I also ride BMX. When I come to practice I am very serious about my sports. I just don’t go to any camps or anything and I just see myself finishing at the high school level. I think we are a good team and I think we will go somewhere. Our team actually thinks it can beat Pahranagat Valley this year,” Henry explained.

BMX is something Henry likes to do for fun. He does it strictly for fun, but can see himself doing a freestyle contest in the future.

“I lay off a little bit because of basketball, but I do still do it during the weekends. I have never broken any bones but I have busted open my leg and I have bruised organs. I would like to take this to the next level, but I think I started too old,” Henry said.

Verzilli believes Henry has come a long way as a student.

“He has matured a little bit and he is out there every day and has the basic skills. He is getting better at it. I am glad to see he is doing that. He is also playing baseball and was excited about that. He does know his grades are important. He just can’t be cool all the time. He has to take on some responsibility for his grades and his actions,” Verzilli said.