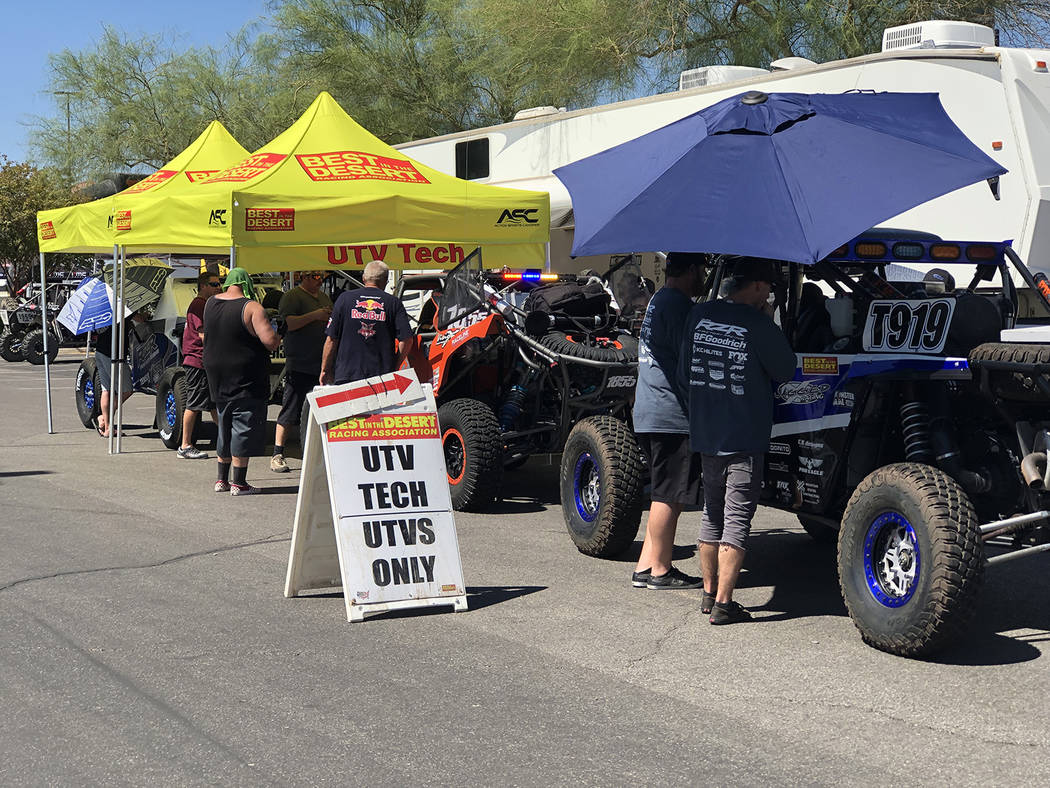 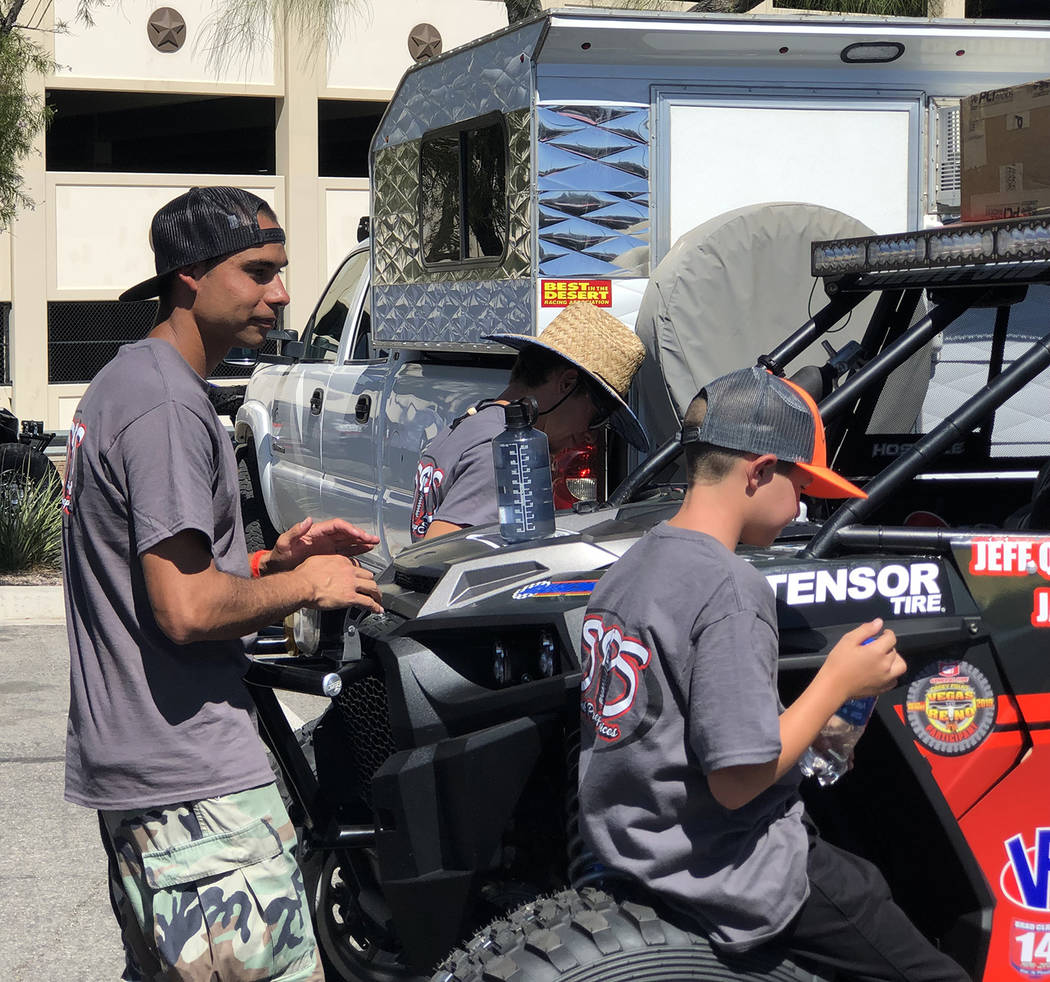 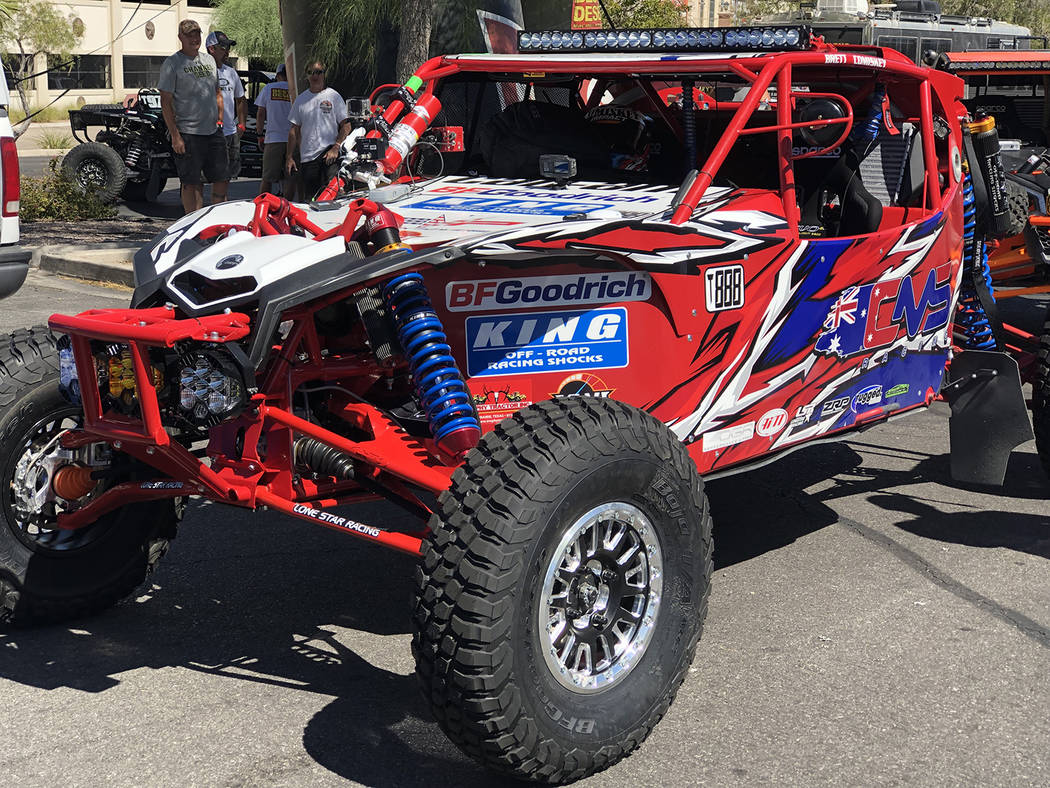 Brett Comiskey might have traveled thousands of miles to compete in Best in the Desert’s Vegas to Reno race, but he felt right at home in Southern Nevada.

“This is our weather,” he said while waiting in line for technical inspections Thursday at Texas Station in Las Vegas. “This is home for me. I love this weather. I lived in it all my life. We get to race in these temperatures all the time. Heat’s not going to bother me. It might bother the car a bit, we might have to drive to conditions a bit if we overheat, but we haven’t got a problem. We’re good.”

A native of the Australian state of Queensland, Comiskey said the most daunting features of Vegas to Reno — the heat and the distance — are what attracts him to it.

“We like the longevity, the seat time you get,” he said. “It’s America’s longest race, and it’s good practice for the Baja 1000. The new car will get a good workout so we’ll see its weaknesses and strengths so we’ve got a bit of time to change anything. We only have one other race in October, and it’s too short of a race to gauge any changes that we do to the car.”

“This is a Dan McKenzie, one of Brett’s co-drivers,” Komsose said of the car. “He designed this car, and Lone Star built it for him. It’s the virgin run, so hopefully, we go out and show what it can do.”

The Australians have some experience with America’s longest off-road race.

“This is CMS Motorsports’ third run in Vegas to Reno,” Komsose said. “Last year, we entered two cars. One car did very well, came in second in class, and the other had a lot of mechanical issues. We’ve overcome all that. Hopefully, in this new car we’ve ironed out the mechanical problems. Dan’s worked on this car exceptionally, changed a lot of things for the better. We’ve just got to prove it.

“We’re really proud of the car.”

Comiskey’s team has tasted other success in the United States, having won the Mint 400 in Jean and the 2018 Best in the Desert series championship in their first year running it.

“So we’re racing here and in Australia, which is a lot of work to do, but I’ve got a good team around me and I’m flexible with my job,” said Comiskey, owner of Comiskey Mining Services, which sponsors the team.

Some of the drivers are much more local, including Thomas Tangedal of Las Vegas, co-driver for Brian Crawford’s program.

“This race is a lot harder just because it’s in August; it’s 110 out usually,” said Tangedal, a few places ahead of Comiskey in the technical inspection line. “The first time I did it, I did it on a motorcycle and it was hard, but even in a car you see a lot of people getting sick, a lot of people falling out just because of how hot it is.

And being leader of the pack is something not everyone can enjoy, and many of the racers are there simply to finish the course.

Crawford, of Blythe, California, said this is his first year with his own program, racing a car in the unlimited turbo class.

“I’ve raced everything from tank cars to Class 1 to trophy trucks,” Crawford said. “I’ve been in trophy trucks for about six years, and this is my first year with my own program. That’s been a longtime goal of mine. Everything kind of pulled together, and some good people jumped on board and we’re here.”

Like Comiskey, Crawford is driving a new car this year, although he has raced off-road for 15 years. Comiskey said he has been racing for about five years in Australia, and this is third in North America.

“I started out in short-course and made the transition to desert racing,” Comiskey said. “I met a guy in Dallas that owned a trophy truck team, and I was learning from them how all of this works. Eventually, I bought a car off Lone Star.”

While Crawford was unable to finish the race, Comiskey was 20th in his class, completing the course in 12 hours, 7 minutes, 29.20 seconds.

Both were in the unlimited turbo class, which included 57 cars, 38 of which reached the finish line in Dayton after starting Friday morning just south of Beatty. Phil Blurton of Auburn, California, won the class in 9:37:28.359, while Bryce Menzies in a Ford trick truck was the overall winner in 8:10:35.985.

As a hobby, it is expensive and not overly lucrative, but Comiskey said he gets a lot out of it.

“We learn off each other and share information with other teams,” he said. “We’re not in it for the money, but it gets my mind away from work. I run my own business, so it’s a good mind-breaker. It’s a good team bonding event where a lot of things from our business we bring into the car. Total enjoyment, good fun.

“I’ve met so many nice people in this sport. You come here, you’re part of a family. I’ve raced other forms of motor sport, and off-road racing is probably one of the best.”