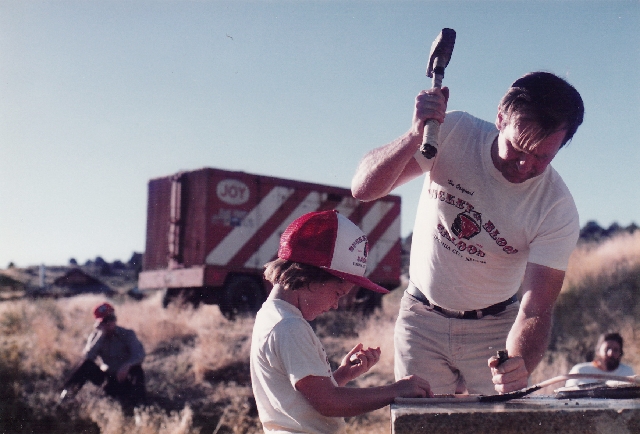 Hand drilling will not be the next craze like mixed martial arts, but it is also not just some odd competition only practiced in remote areas.

Former world champion hand driller Fred Andreasen says it is pretty popular wherever mining was prevalent, which means most of the western states.

Andreasen never got any funny looks when he drilled. He was a hand driller of the old school. He was tough and hit the steel hard.

He won the world title seven times in a span of 20 years and took the state championship 14 years in a row. Andreasen hand drilled from the 1970s until the early1980s.

Today, he resides in Tonopah with his wife Diane.

Diane said she came into the sport and had never seen it done until she met her husband.

“I enjoyed watching him do it. He would practice every day and I supported him fully,” she said.

Back in the late 1800s  drilling holes in mines was serious business. It took some time and a lot of sweat equity to drill holes into solid granite. The holes were used to place dynamite for blasting away the rock.

A good driller can strike a bit at the rate of 65 to 90 strokes per minute.

In mining competitions all over the country, the drillers compete to see who can hand drill the deepest hole in 10 minutes. One of the biggest competitions is the World Championships in Carson City on Nevada Day. The state championships are held annually during Jim Butler days in Tonopah.

Fred explained how he got into his first hand-drilling competition.

“My dad got me into the competition. He did it. I had the hammer and the steel from him. I never really thought about it until one day, when I was working at the Bucket of Blood in Virginia City. The owner’s name was Don McBride and somebody brought a big poster in advertising the big state championship for drilling in Gabbs, Nevada.

The trick to hand drilling is the endurance. Hand drillers must practice to be competitive.

“You have to have endurance and the accuracy to do it. You have to be able to hit it hard and be able to last for ten minutes. I did this for 20 years. I started about 30 and I quit when I was 50,” Andreasen said.

In his prime, Andreasen started off at nine inches in 10  minutes, and by the time he retired he was doing about 14 inches.

“I would imagine my depth today would still be competitive,” Andreasen said.

Fred is a perfectionist and liked to be in shape for a contest. Most of the time he would wander out to the desert foothills and find some rock to pound, but for the serious contests like the world championship he would have large pieces of granite delivered to  his house.

One year he said he spent $1,000 to have this done. Today, the pieces of rock are still in his yard.

“I like to have the same rock they use in the Tonopah competition, which is Sierra white granite, which is supposed to be the hardest granite,” he related.

Hand drillers never really think about their safety. The last thing they do is think about hitting their hand, but it happens to the best of them.

“Normally when you hit your hand it gives because you are hanging on to the steel. Your thumb gives and it bleeds. It swells up and in a couple of days it’s all right,” Fred said.

In 1978, Fred was drilling about a week before the worlds contest in Carson City. He was practicing striking granite in the backyard of his home, when he missed the steel and hit his hand.

“I was down to the last inch and I was holding the steel with two fingers,” he said. “I hit it and crushed it into the rock. I sat around and drank beer for four or five hours. My wife decided that I finally had to go to the emergency room at 10 p.m.”

Fred described the damage to his thumb. “I broke my thumb in four to five different places. I hit it so hard that my knuckle blew out the end of my thumb and I severed all the tendons.”

He said the doctor, who was not familiar with the contest, told him he should never use a hammer again in that manner. The doctor said he was definitely not going to compete in the upcoming competition. He said if he did and hit his thumb again he could lose it.

The veteran driller was not deterred. He went to see his regular orthopedic surgeon and got a second opinion. He was sure he was going to compete and no doctor was going to stop him from doing so.

Fred related his experience with his orthopedic surgeon, “The doctor took one look and said, ‘You sure hit that bad. The most important thing you have to do now is to get it ready for the contest next week.’

“So the doctor put a smaller splint on my hand and told me to go home and practice and his parting words were, ‘Just don’t hit it again.’”

The world champion competed. He said he got into a groove, didn’t  even think of his hand and won the competition.