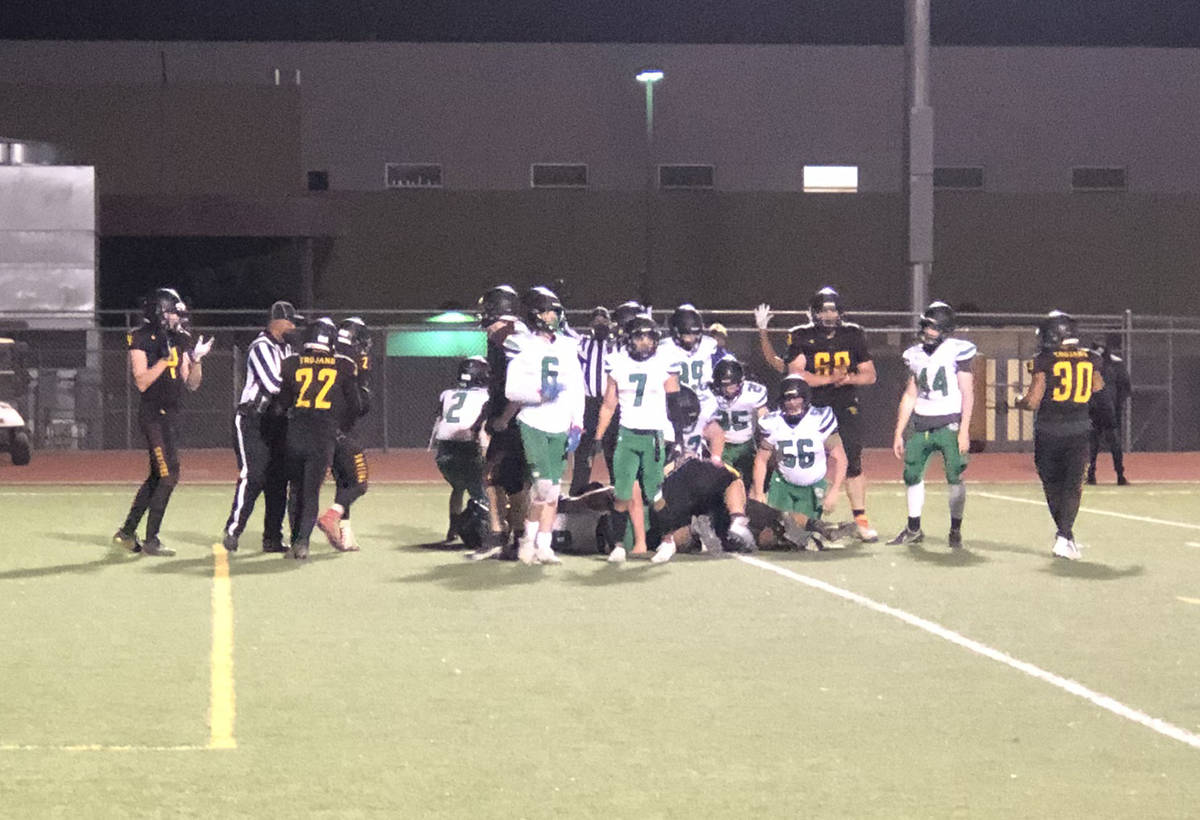 Tom Rysinski/Pahrump Valley Times Under the bodies is Pahrump Valley High School quarterback Andrew Avena, whose 1-yard sneak during the fourth quarter put the Trojans on the scoreboard against Virgin Valley. The Bulldogs defeated the Trojans 14-6. 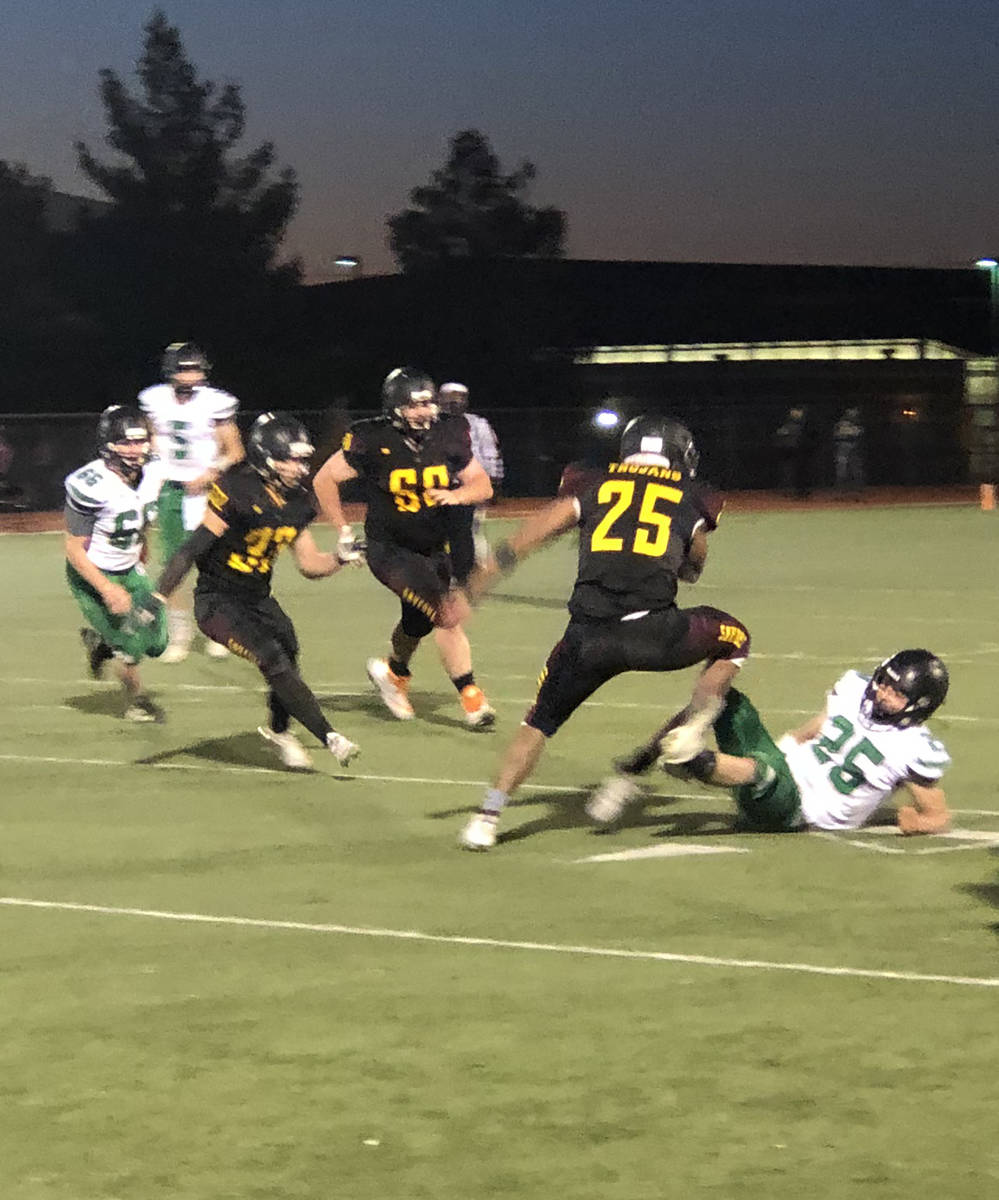 Tom Rysinski/Pahrump Valley Times Pahrump Valley High School sophomore Daniel Dilone gets past Virgin Valley's Ethan Workman on his way to a 14-yard gain during the Trojans' 14-6 loss to the Bulldogs on Friday night at Trojan Field.

The Pahrump Valley High School football team ended a long scoring drought Friday night, but that was not enough to stop Virgin Valley from beating the Trojans for the 25th consecutive time in a 14-6 victory at Trojan Field.

The loss leaves the Trojans at 0-2 halfway through their shortened season, while the Bulldogs evened their record at 1-1.

Pahrump Valley had not scored in its two previous games — both against Moapa Valley — and the streak was 11 quarters when Andrew Avena capped a short 25-yard drive with a sneak from a yard out to cut the Bulldogs’ lead to 14-6 with 8:01 left in the game. The Trojans got a break with the short field after the Bulldogs were flagged for holding twice, pushing them back inside their own 10.

After an 18-yard punt, the Trojans needed just four plays to score. Fabian Soriano took a pitch right and rambled 14 yards to the 11, and then went up the middle for 10 more, fumbling into the end zone on a play in which the ball was ruled down at the Virgin Valley 1. Avena took it from there, and after a failed 2-point conversion run the Trojans were within 14-6 with much of the fourth quarter remaining.

But the Bulldogs responded by running out the final 7 minutes, 56 seconds of the game, converting two fourth-down plays in the process, to continue a winning streak over the Trojans that dates to a 12-0 Pahrump Valley win in 1993.

One big difference in the game was turnovers, with the Trojans coughing up the ball four times — losing three of them — while a Henry Amaya interception was the only Bulldogs turnover.

Virgin Valley took advantage of a turnover to get on the board first, as Bulldogs senior Camron Noel recovered a Trojan fumble at the Pahrump Valley 32. On third-and-8, Will Barnum found junior Benson Leavitt for 14 yards, and two plays later, Barnum rolled right and hit senior Rafael Guzman for a 15-yard touchdown pass. Ethan “Peanut” Workman, who led the Bulldogs with 62 tough yards on 20 carries, ran in the conversion for an 8-0 lead.

The score remained the same through halftime and much of the third quarter. But after stopping the Trojans on fourth-and-1 near midfield, the Bulldogs went on eight-play, 51-yard drive capped by Barnum’s 20-yard keeper with 4:20 left in the quarter. The conversion pass failed, and it was 14-0 Bulldogs.

The Trojans outgained the Bulldogs 155-124 on the ground, while the Bulldogs held an 88-50 advantage on yards through the air. Each team converted on a fake punt and, aside from the two holding calls that led to Pahrump Valley’s touchdown, there were few flags thrown.

Soriano led the Trojans with 55 yards rushing on 10 carries, while Amaya rushed eight times for 44 yards. Avena completed 3 of 6 passes — all to Bill — for 50 yards.

The Trojans will host SLAM Nevada on Friday, then finish the truncated season with a rematch against the Bulldogs on April 9 in Pahrump.

For more coverage of the game, see Trojans Football Notebook at pvtimes.com/sports