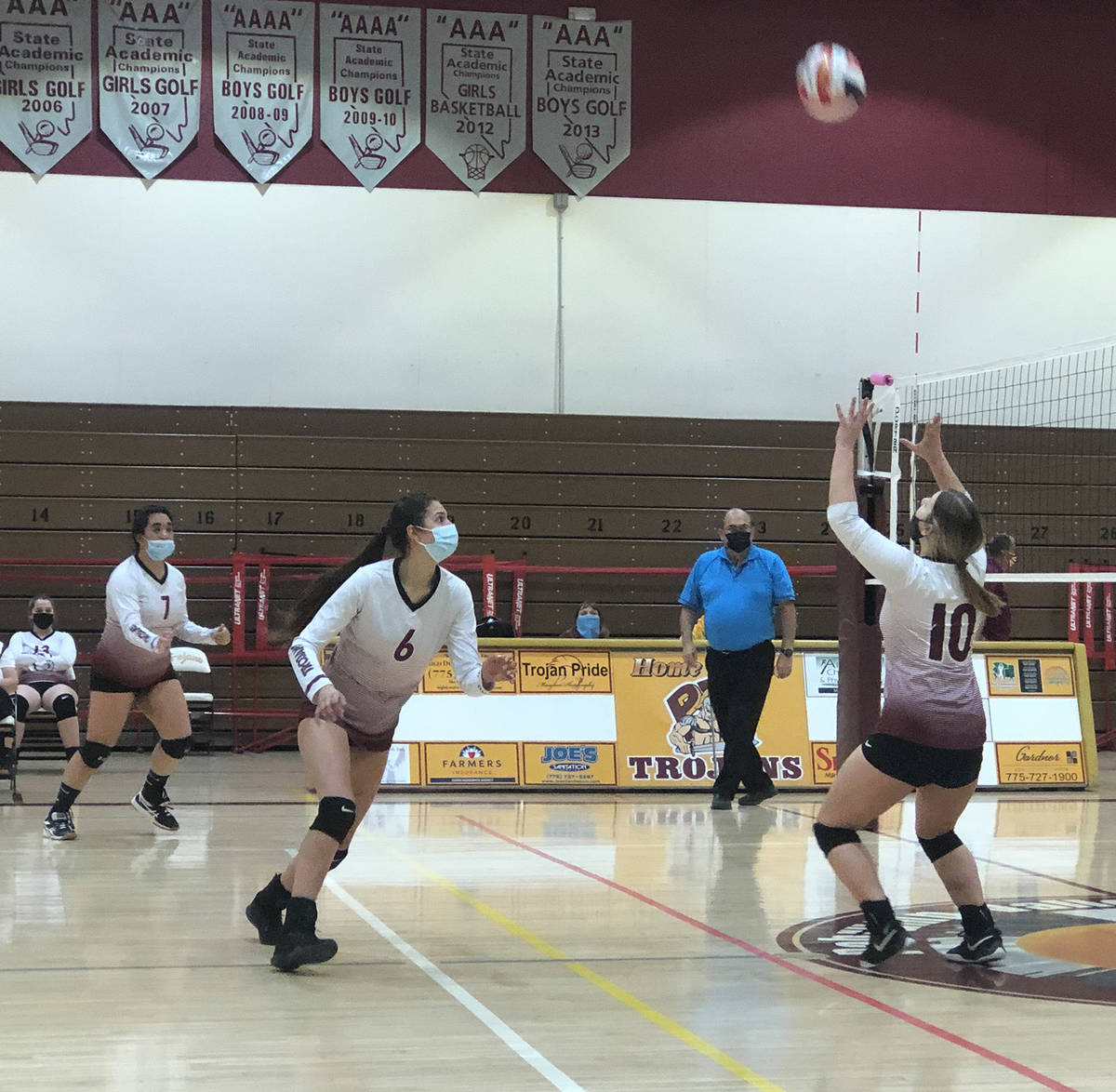 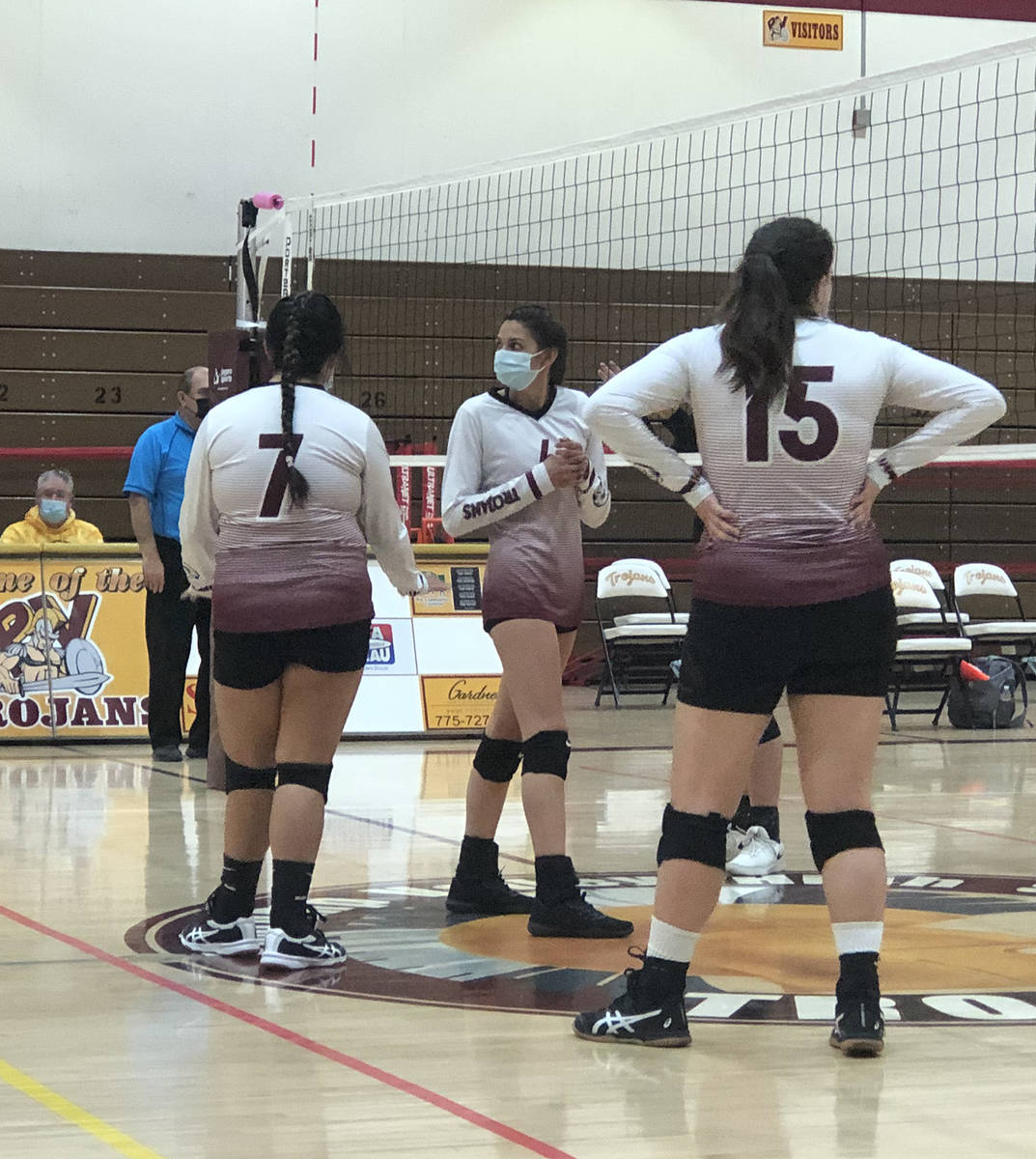 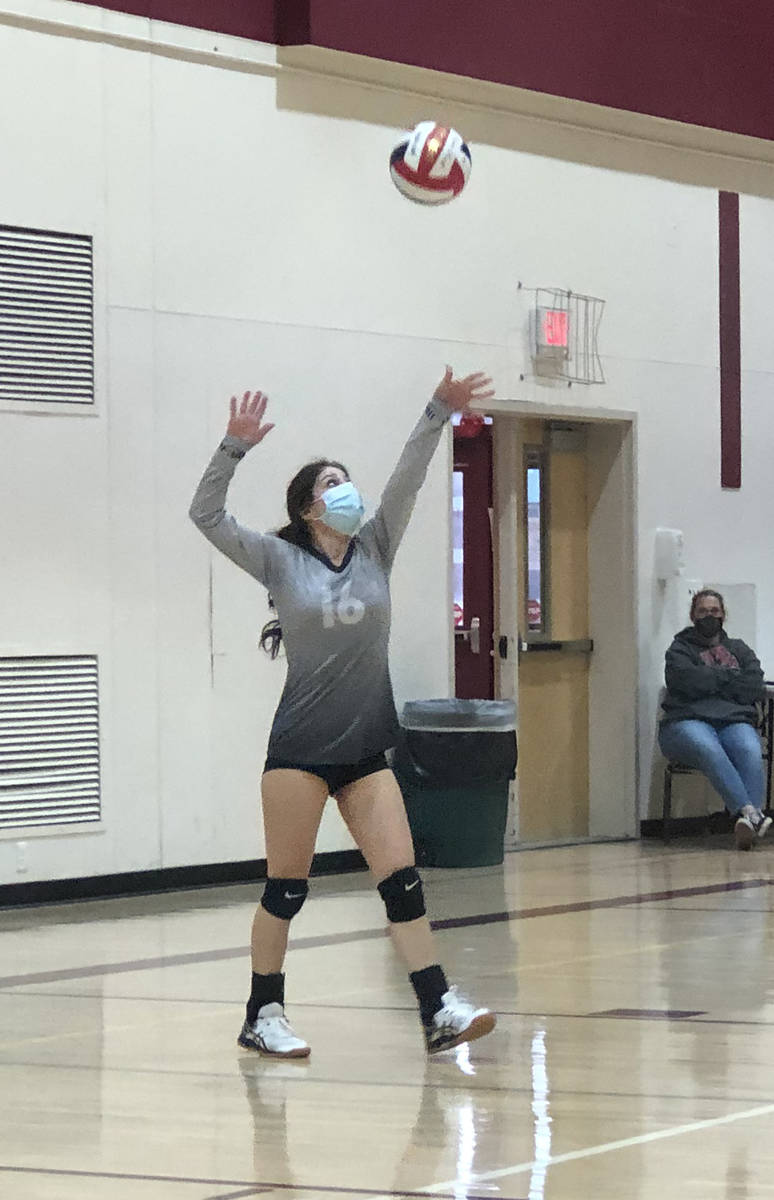 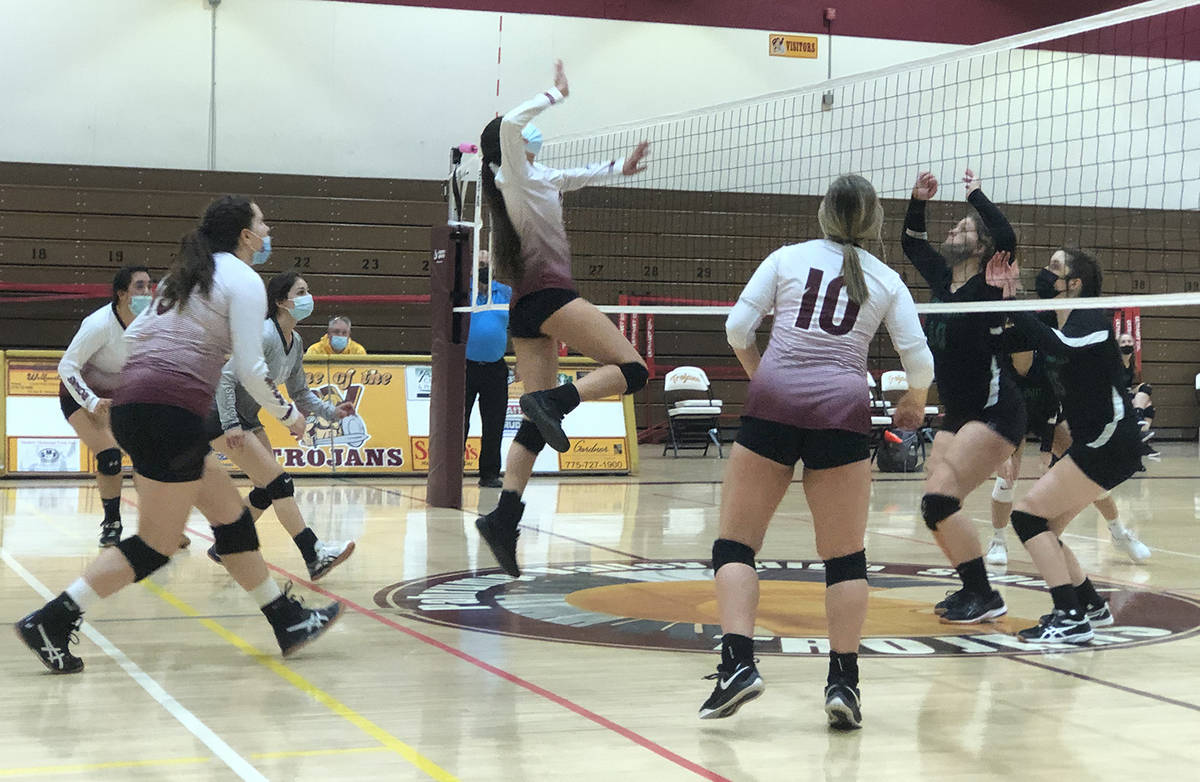 “This group of girls, I love playing with them,” Harris said after the Trojans dispatched Virgin Valley 25-23, 25-22, 25-15 on Monday night in Pahrump. “I love having them on the team. They’ve always loved this sport. It’s one of those things that when you know that they love the sport they’re fun to coach.

“This year we’ve had the most fun. I think a lot of it had to do with the fact they were so excited to finally do something.”

They did just enough against the Bulldogs, having a bit of trouble putting them away during the first two sets and then pulling away to win the third.

“We just played well enough to beat them,” Harris said. “That’s all they did. We were a little more relaxed than we should have been. We let them back in a couple of times.

“They’d get a cheap shot over, and it would kind of rattle us. Come on, ladies, it’s one point.”

The Trojans steadily stretched a lead during the first set, going up 14-7 and matching the margin at 19-12 when the Bulldogs could not return a Kalea Whitney serve. But after a Virgin Valley timeout, the momentum shifted, and the Bulldogs chipped away until finally pulling even at 22-22, leading to a Trojans timeout.

“We’ve got to play the game like we know how to play,” Harris said she told her team. “Go out there and enjoy the game. Make a good pass, you know the ball is coming to you.”

Mahina Araujo served an ace on the first point after the timeout, and two points later, when Nicky Velazquez nailed a kill between the Bulldogs’ lines, the first set belonged to the Trojans.

It was a similar story during the second set, with the Trojans building a 23-14 lead before things went haywire. Five consecutive Virgin Valley points — the last one of those little dumps over the net that frustrate opponents — forced another Trojans timeout.

Things didn’t change abruptly, but with the win only two points away there was a margin for error, which the Trojans promptly used. Consecutive attempts at kills on set points went long, and it was 24-22 before another Velazquez kill settled the issue.

The teams battled evenly through much of the third, but when the Bulldogs were called for a carry to give the Trojans a 13-12 lead, the home team went on a roll. With Kate Daffer serving 11 consecutive points, the Trojans played a very steady, focused game down the stretch. By the time Daffer finally hit a bad serve, it was 23-13, with only a Tayla Wombaker kill and a Bulldogs kill attempt hitting nothing but net to wrap things up.

Oddly, neither Daffer nor Harris thought she played her best Monday night.

“I wish I could hit a little better, but my defense was OK,” Daffer said.

The team’s seniors — Araujo, Daffer, Velazquez and Whitney — were honored before the game. Although the Trojans still have three opponents left, senior night had Harris thinking about that group.

“When she started as a freshman, you never would have believed she would come as far as she has,” Harris said of Araujo. “She was something else. Mahina, Nicolette, you know, I just love these kids.

“Who doesn’t love Kate Daffer? Every coach that gets her loves her. She works hard, she doesn’t get rattled.”

“Her defense from last year to this year, night and day,” Harris said. “She’s just a brand-new kid. Other coaches are commenting on her. They like the way she plays. They didn’t see her coming.”

Harris was pleased with an aspect of the Trojans’ game that has been lacking at times this season.

“We served better than we have been,” she said. “Our serving percentage was way better today as a team.”

Continuing that trend will serve them well as the Trojans (5-2) finish the season.

“You put us up against Moapa, and I think we’re going to play better,” Harris said. “I’m excited about next week’s games. We have Faith and Moapa next week, Tuesday and Wednesday back to back, and then Virgin Valley on the road on Friday.”