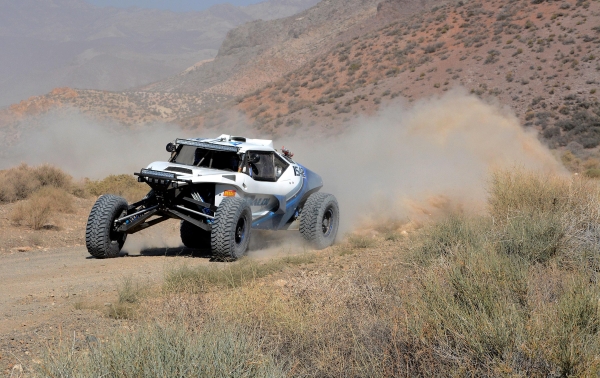 Jason Voss made it a three-peat in the General Tire Vegas to Reno race (8 hours, 52 minutes and 32 seconds), which started on Friday morning.

Voss was unofficially the overall winner and fastest time. He drives a Ford Trick Truck made by Jimco Racing and is from Cupertino, California.

Mike Julson, the president of Jimco racing and the maker of Voss’s car, wasn’t surprised when Voss won it again and he said his company is on cloud nine.

“I have been in off-road racing for 35 years,” he said. “The truck that Voss drives was one of our first generation trucks that we made for him in ’08. We are now on our third generation Trick Truck, which Justin Lofton took to the Mint 400 and won.”

Julson said he had roughly 40 vehicles in the race with two of his Trick Trucks finishing in the top 10.

“At Jimco Racing we know what it takes to win,” Julson said. “Voss wins because of his experience.

He gets off-road racing and also knows what it takes to win. He goes just fast enough to win. He was the sixth car to start and he goes out at a steady pace with no mistakes so by the time he got to Tonopah he was in first place.”

Jimco Racing has taken the last four years of the Vegas to Reno race. In 2012 it was Garrick Freitas of Tulare, California, who won in his 1500 class Jimco car.

Julson said the reason for their success is experience building top cars.

“I can tell just by looking at a vehicle in a tech inspection whether or not it will make it through the race,” he said. “We live and breathe off-road racing. We only do this. Our designs are not just stressed tested by a computer but off-road tested. No software can substitute for the real Nevada desert.”

An interesting tidbit is that Jimco said they don’t make money from the handful of Trick Trucks they manufacture each year, and each Trick Truck could cost around a million dollars to make.

“Our money comes from the off-road parts that we sell that go into the vehicles we make,” Julson said.

So the more wins they get the more parts they sell.

In the unlimited car class or 1500 class, Eduardo Laguna of Mexicali, Mexico was first in his class and fourth overall (9:28:31).

Ryan Arciero, Troy Herbst’s co-driver said Troy did well in the Baja 500 earlier in the year and finished 10th and was hoping to get a win in Vegas to Reno.

“We had a bad run in the trials and this put us back at 43rd,” Arciero said. “We changed our strategy. Basically we are hoping for attrition to help us out. We have had small issues and have not been able to go at the leaders in the past,” Arciero said. “Both Herbst brothers feel that they have the cars to compete. We just need to beat the clock.”

Trials were held at Jean on Wednesday for start positions for the 1400 Trick Trucks and 1500 cars.

Lacrecia Beurrier of Dragonfire Racing, who was a featured racer last week won the unlimited UTV class and was 100th overall (16:22:17.08) . The win gave her the Unlimited UTV championship.

Casey Folks, owner of Best in the Desert and race organizer, said he had the best turnout in the race’s history with 333 drivers in the race. For more results see http://bitd.com/wordpress/wp-content/uploads/2015/08/2015-VtoR-Unofficia….