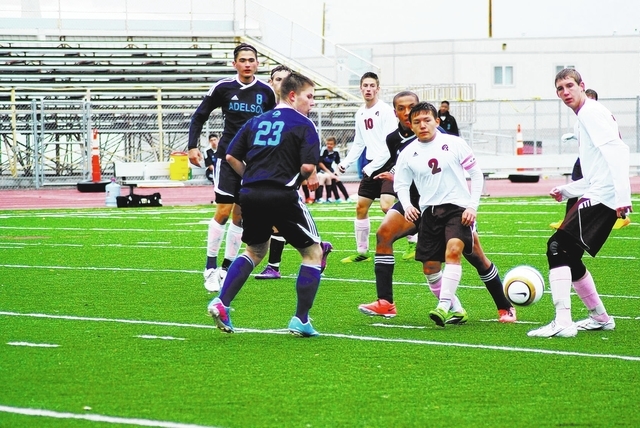 On a cold, wet and gloomy day, the Trojans men’s soccer team played the Adelson Lions on a slick and miserable field. The weather was on and off rain, but it was enough to soak the field and the jerseys of the players. The Trojans swam to a 3-1 victory over the Lions.

The game was 1-0 at the half. Trojans Coach Don Boulden felt the score was low because of the wet weather.

The Trojans scored two more goals in the middle of the second half. The third goal was a spectacular performance by Jose Nunez. Nick Nelson kicked the ball, the Adelson Goalie deflected it and it hit the goal upright and went spinning in the air. Nunez got under it and headed the ball into the goal for the third score.

For the Trojans scoring, Nunez had two scores on the game and Nelson had one.

Late in the second half, with eight minutes to go, Boulden put the second string into the game, mixed with some junior varsity players. Adelson scored on this team, the final goal of the game.

Boulden said he wanted to use this game to practice. “We wanted to practice our game systems today. We were not able to accomplish all of our goals today and I think the weather played a role in that today. That is not an excuse. I was pleased with our ball possession. It was not the outcome we hoped for, but a win is a win,” Boulden said.

The coach wants to prepare his team for the top three teams in the league by going back to the fundamentals and doing a lot of conditioning.

The team goes to Meadows next Tuesday and the game starts at 3 p.m.