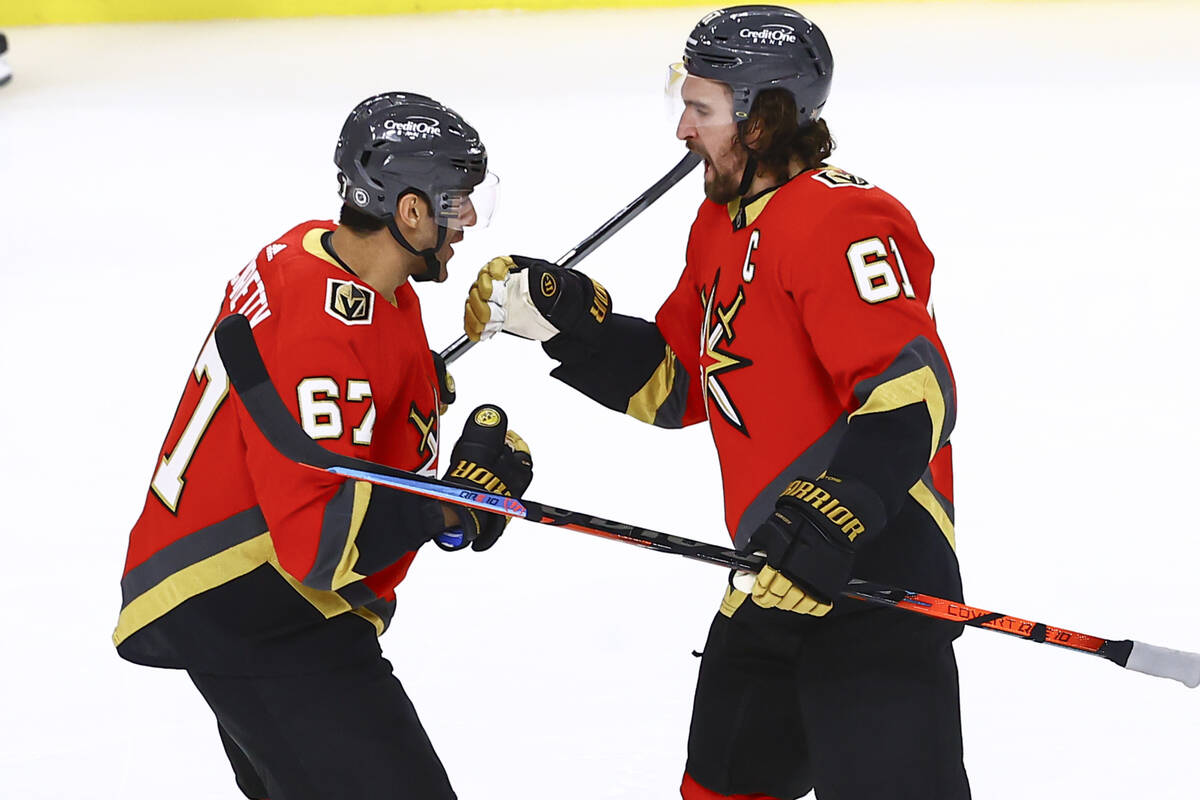 The NHL, after a long hiatus, is back in the Olympics. Several Golden Knights could be going as well.

To accommodate the event, the league will take a long break after the 2022 All-Star Game at T-Mobile Arena on Feb. 5 and won’t resume play until Feb. 23.

Here’s who could join them from the Knights:

Sweden has good centers in Vancouver’s Elias Pettersson, the New York Rangers’ Mika Zibanejad and Washington’s Nicklas Backstrom, but Karlsson should slide right in as a two-way force who helps lead the penalty kill.

The 28-year-old native of Marsta, Sweden, has represented his country at multiple youth tournaments and the 2017 World Championship.

Lehner should be in the mix for an Olympic starting job, along with Calgary’s Jacob Markstrom and Boston’s Linus Ullmark.

The 30-year-old from Gothenburg, Sweden, has played for his country at the youth level but never in a senior event. Lehner ranks second in save percentage (.923) among goalies who have played 50 or more games the last three seasons, so he has a strong case to be in the crease.

Pacioretty, from New Canaan, Connecticut, ranks 10th in goals over the last two NHL seasons and could give the U.S. needed firepower on the wing.

The 32-year-old played in the 2014 Games, in which the U.S. finished fourth, and will likely be one of the top veterans on an American squad looking for its first medal since 2010.

Pietrangelo, like Pacioretty, is a 2014 Olympic veteran and should easily slide into the right side of Canada’s defense after winning gold almost eight years ago.

The 31-year-old from King City, Ontario, brings gravitas as a Stanley Cup-winning captain and will be counted on to help his country win the tournament for the 10th time.

The captain of the Knights should crack a deep Canadian forward group because of his unique set of skills.

While the team figures to feature several superstar scorers like Connor McDavid and Nathan MacKinnon, Stone can bring a high-end defensive impact without sacrificing offense. That should make the Winnipeg native invaluable to coach Jon Cooper.

Theodore will likely join Pietrangelo on Canada’s blue line, possibly as his partner.

The two both play on the right side with the Knights, but Canada prefers to play defensemen on their strong side, which for Theodore is the left. Either way, the 26-year-old from Langley, British Columbia, ranks eighth in points among defensemen the previous two seasons and should boost a fearsome Canadian power play.

Russia has a lot of depth on the wing — including scorers Alexander Ovechkin, Nikita Kucherov, Artemi Panarin, Andrei Svechnikov and Kirill Kaprizov — but Dadonov could work his way into the picture if his Knights’ tenure gets off to a strong start.

The Chelyabinsk, Russia, native had at least 25 goals for three straight years before scoring 13 in last year’s condensed schedule.

If he gets back to his previous pace, he could end up in Beijing.

Janmark said after re-signing with the Knights that he hoped to have a strong season to get on Team Sweden’s radar.

The 28-year-old from Danderyd, Sweden, is a versatile forward who could slot in many different places in the lineup.

Marchessault has been one of the Knights’ most consistent players the past four seasons and had a strong performance for Canada at the 2019 World Championship, with 10 points in 10 games.

That could get the Cap-Rouge, Quebec, native a look for the Olympic roster. It’s going to be a hard group to crack with the talent the country produces.

Tuch represented the U.S. at the youth level and might have been able to compete for a spot on the Olympic squad with a strong start to his season.

The Syracuse, New York, native had shoulder surgery in July, however, and is expected to miss six months. That could take him out of contention.