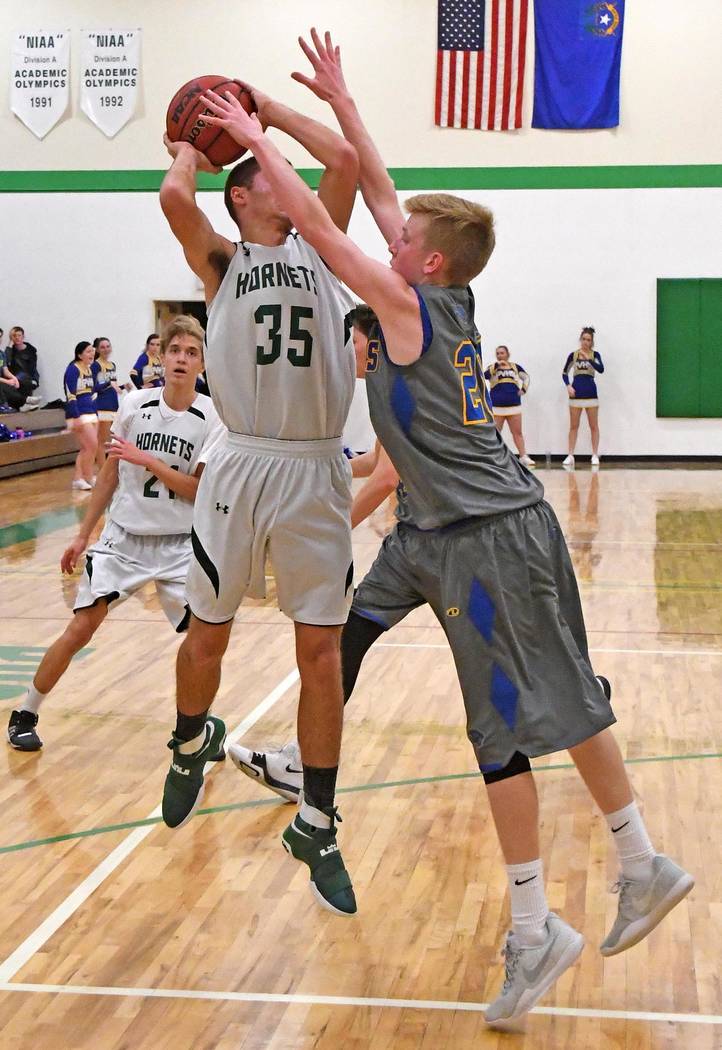 Junior Jorge Leon hit two free throws with four seconds left on the clock to lift the Beatty High School boys basketball team to a dramatic come-from-behind 63-62 victory over Spring Mountain on Jan. 16 in the Class 1A Southern League opener.

“The team had a great night of shooting,” Beatty coach Steve Sullivan said. “They were 50 percent from beyond the arc and 70 percent from the floor. The boys had great ball movement and were looking for areas to attack while being patient at the same time.”

The final minute was a wild one as the Hornets pulled out a win over the Golden Eagles for the first time since 2011. The Hornets trailed 61-59 but had fouls to give before finally getting Spring Mountain to the line, where they hit the first and missed the second.

Henry got the rebound and kicked it out to Leon, who found Fabian Perez sprinting up the court. Perez worked the baseline and passed to Brayden Lynn. Lynn missed a shot, but Geo Maldonado was there for the putback to pull the Hornets within one.

This time the Golden Eagles (8-9, 2-1 Class 1A Southern) missed the front end of the one-and-one after a foul. This time the Hornets missed two shots, but Leon rebounded the second one and was fouled on the putback attempt with four seconds to go. Leon hit both free throws, and the Golden Eagles came up short on a last-second shot.

“It was a great final minute of basketball and a great moment for Hornet basketball,” Sullivan said.

Two days later, Beatty shot just 6 for 39 from the floor in a 65-35 loss to Pahranagat Valley in Alamo.

“I think a large part of our shortcomings that game was fatigue from the Spring Mountain game two days before,” Sullivan said. “In order to be competitive in postseason, a team has to be able to compete with high-caliber teams day to day, so moving forward, we will need to work on that by building up our bench, working to improve every practice and playing at a high level every game no matter who we play or what the score is.”

Sullivan said the Hornets were sluggish on defense and didn’t move the ball well on offense against the Panthers (9-10, 4-1 1A Southern), and noted a lack of communication and an inability to make shifts they needed to make. Perez scored 10 points for the Hornets, who surrendered 25 points during the second quarter and trailed 38-18 at the half.

The Hornets got back on track at home Jan. 22 against Indian Springs, outscoring the Thunderbirds 13-0 during the third quarter and rolling to a 55-38 win. Alan Sandoval led the way with 12 points, with Perez netting 8 and Henry and Maldonado each finishing with 7.

Three days later the Hornets were back on the road, traveling to Littlefield, Arizona, to take on Beaver Dam. Despite averaging only 41 points per game, the Diamondbacks (6-6, 2-2 1A Southern) got back to .500 with a 59-40 win.

The game left the Hornets at 4-4 on the season, including 2-2 in the Southern League.