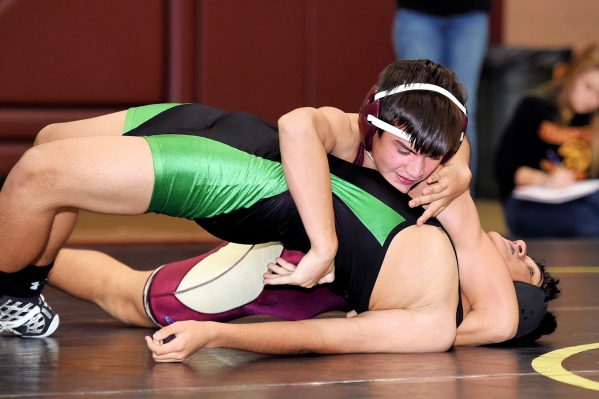 The Trojans finished in seventh place out of 15 teams at the Chaparral Invitational with 91 points. Mojave was the first-place team with 160 points, Clark in second with 159 points and Foothill was third with 129 points.

Trojans coach Craig Rieger was satisfied with the results.

“We are 2-4 in league and we just need more experience and I thought this was a good tournament for my boys to see,” Rieger said.

The coach said he had five wrestlers place in the tournament.

Senior Gino Gusman (126 pounds) finished 4-0 and was first in his weight class.

“Gusman is undefeated for the year and he controlled every match,” Rieger said. “The win-loss record in wrestling is important because it determines your seed for the zone match on Feb. 13. Gino has a chance with a win against Sierra Vista to go undefeated and get that number one seed in zone.”

Gusman was excited about his wrestling.

“I went in with my head high,” he said. “I did everything I wanted to do as far as moves. I made a few mistakes, but I was able to recover from them quickly.”

According to Rieger, he will take his team to the zone tournament and four extras.