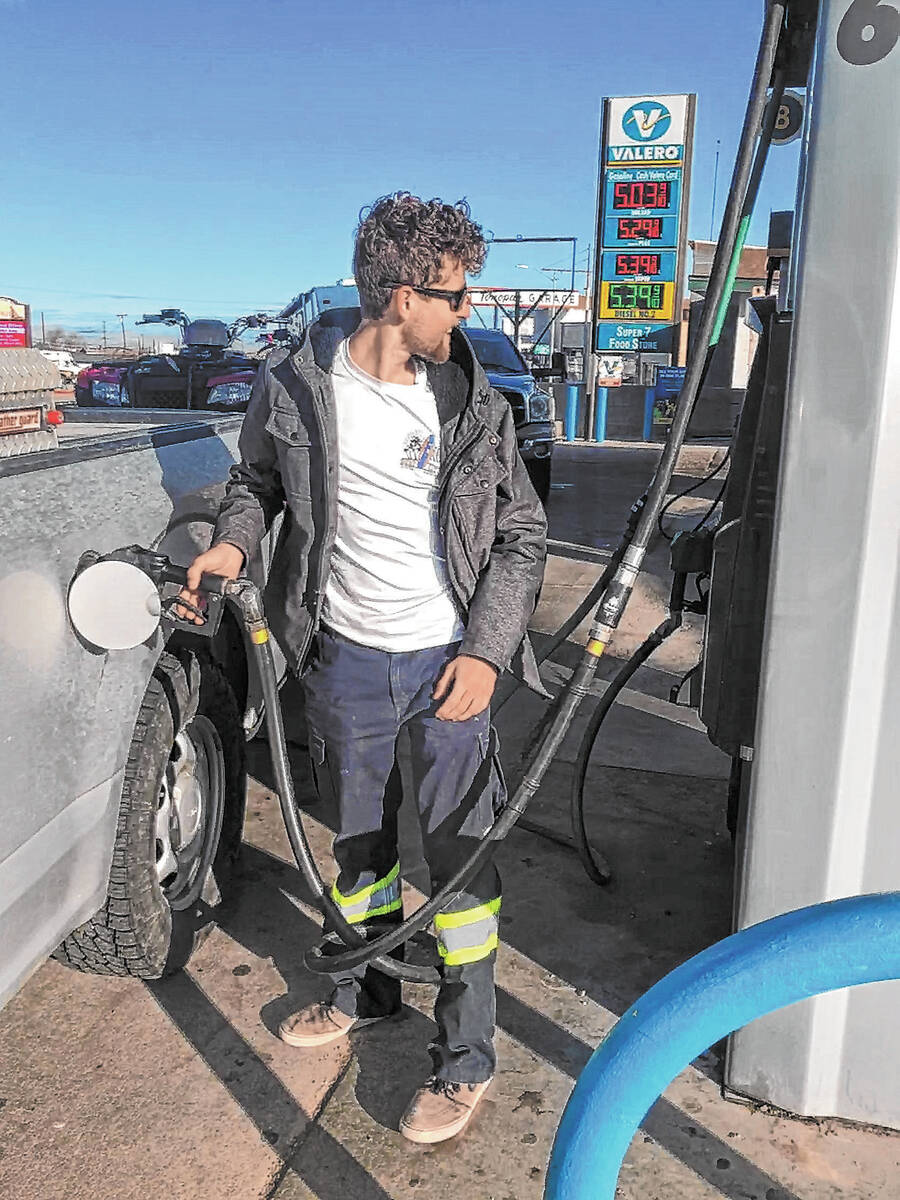 (Charity Wessel/Times-Bonanza) Brandon Ferguson pumps gas at Valero in Tonopah in March 2022 when gas prices peaked above $5 per gallon for the first time in Nevada. As of Tuesday, the average gas price in Nevada was edging toward $6 a gallon in some areas. In Tonopah, the Rebel gas station on Depot Road had the cheapest gas on Tuesday at $5.43 per gallon. Texaco on Erie Street had the highest price at $5.69 per gallon. 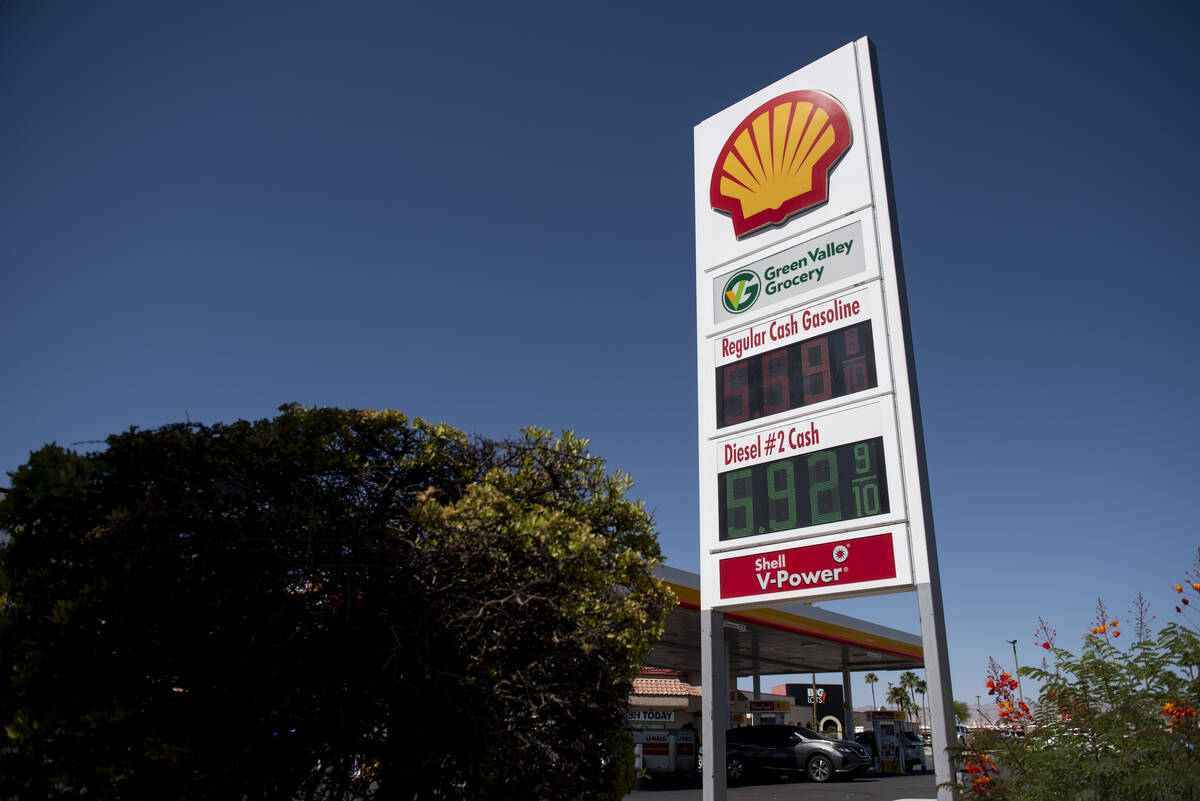 A Shell station on West Sahara Avenue shows a gas price of $5.59, on Monday, June 6, 2022, in Las Vegas. Gas prices hit an average of $5.49 in Nevada, above the national average of $4.86 according to AAA. (Steel Brooks/Las Vegas Review-Journal)

Gas prices continued their upward climb Wednesday with Nevada hitting another record high average for regular unleaded gasoline and raising a key question: Will the price in surpass $6 per gallon? It’s already happened in Reno, where prices on average were $6.05 per gallon on Wednesday, according to AAA data.

Patrick DeHaan, lead petroleum analyst for GasBuddy, said $6 per gallon gasoline isn’t likely for the southern part of the state, but isn’t out of the question.

“We’re just one refinery issue away from something like that ($6 per gallon gasoline),” DeHaan said. “I don’t necessarily see us getting there without something significant happening that we haven’t seen. But, you know, it could happen.”

One occurrence that could send gas prices even higher would be a significant hurricane impacting oil operations in the Gulf Coast.

With the National Oceanic and Atmospheric Administration forecasting an above-average hurricane season, with three to six major hurricanes possible, the possibility of that occurring is there.

“It could shut down refineries at a time when we don’t have enough refinery capacity,” DeHaan said. “If we see one major hurricane hit a couple of refineries in the Gulf of Mexico, Houston or Lake Charles or around the Mississippi River, it’s basically going to take out supply and there’s no margin for error this summer.”

Wednesday’s average price in Nevada of $5.56 a gallon, according to AAA data. Sations in Tonopah ranged from $5.43 a gallon at the Rebel on Depot Road to $5.69 a gallon at the Texaco on Erie Street.

Nationwide gas prices are also at record highs with the national average Tuesday at $4.91 per gallon, with the recent surge partly tied to low U.S. gasoline inventory.

“It’s (gasoline inventory) at its lowest seasonal level in eight years,” DeHaan said. “Things continue to tighten, demand is showing a little bit of a sign of slowing down somewhat, but it’s fairly impressive that basically everyone is seeing record highs and Americans are still filling up.”

Refining capacity has also played a role, dropping by about 1 million barrels per day compared with 2019, DeHaan said.

“Now with demand roaring back and oil is up due to the Russia war in Ukraine, we have less refinery capacity at a time where consumers are really filling up their tanks,” DeHaan said. “Refiners are trying to keep up with demand and inventory has continued to decline.”

Earlier this year gas prices began surging largely due to the beginning of Russia’s invasion of Ukraine, later coupled with refinery issues in Southern California, the source of the bulk of Las Vegas’ gasoline. That lead to Las Vegas breaking the record average gas price of $4.27 that had stood since 2008.

From there prices peaked at an average of $5.27 per gallon set on March 29, then leveled off a bit, dipping as low as $5.12 per gallon on May 12. From there the price fluctuated between $5.14 and $5.21 per gallon before a steady daily increase began May 28, AAA data compiled by the Review-Journal revealed.

Whether prices will level off again in the near term remains to be seen.

DeHaan said there has been a slight decrease in demand as of late, but not enough to send prices lower. Unless the supply somehow jolts up, prices won’t fall by any noticeable amount anytime soon.

The long term outlook is a mixed bag, with DeHaan saying prices after the summer will likely range between $4.75 and $5.75 per gallon in Las Vegas.

“If we get some real exceptional events, it’s not impossible that we go back under $5,” DeHaan said. “At this point I can’t say that’s likely.”