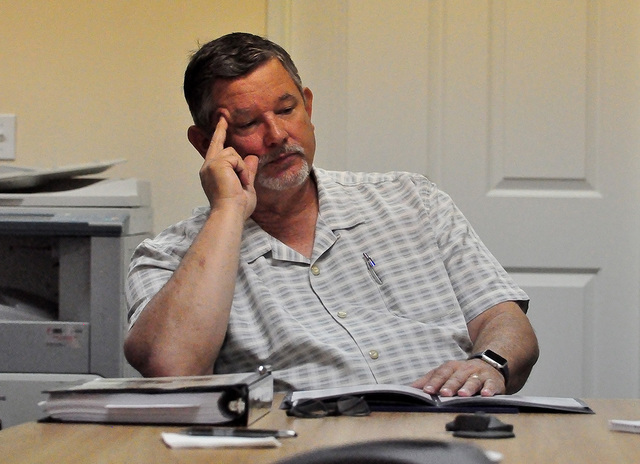 District 36 Assemblyman James Oscarson has submitted two bills draft requests so far for the 2017 Legislature. One is to revises provisions relating to financial support for the Breakfast After the Bell Program in schools, the other is to make various changes regarding campaign practices. Horace Langford Jr./Pahrump Valley Times

The list released Friday offers a snapshot of some of the issues lawmakers will debate when they convene Feb. 6 in Carson City for a 120-day session held every two years. The list provides just snippet descriptions of what the proposals entail. Written details are not revealed until bills are actually introduced in the Senate or Assembly.

More than 1,000 bills are typically introduced during a session, but not all of them are heard in committees or voted upon.

Right-to-die legislation was introduced last year, but no hearing was held. State Sen. Joseph Hardy, R-Boulder City, as chairman of the Senate Health and Human Services Committee, opted not to consider the matter. A physician, Hardy at the time said he believed in palliative and hospice care to ease the suffering of seriously ill patients but could not condone what critics call assisted suicide.

Assemblyman Jim Wheeler, R-Gardnerville, is proposing to lower Nevadas gambling age to 18 from 21.

I just believe if theyre old enough to go fight in our military, we ought to be able to allow them to go to a casino, have a good time and enjoy themselves, Wheeler said.

The move could also expand Nevadas tourism market to a younger crowd and pad gambling tax revenues for the state, he said.

Hes requested a bill authorizing local governments to enact ordinances allowing for marijuana social clubs, events and concert arenas to allow the public use of marijuana.

The fate of Segerbloms request hinges on the outcome of the November election, when voters will decide whether to legalize recreational use of marijuana in Nevada.

While the 2015 Legislature was the session for tax talk, the topic will likely be debated again next year with focus on Nevadas new commerce tax.

A proposed referendum pushed by Republican state Controller Ron Knecht to repeal the commerce tax imposed on businesses that generate $4 million or more in annual revenue failed an attempt to qualify for the November ballot.

Assemblyman John Ellison, R-Elko, who voted against the commerce tax, is resigned that its likely here to stay. But he wants to guard against lawmakers tinkering with that $4 million threshold.

If they lower that … it would create a massive problem for small businesses, Ellison said. Hes requested a proposed constitutional amendment requiring that any changes to the threshold be subject to voter approval.

Assemblyman Elliot Anderson, D-Las Vegas, also is requesting a constitutional measure to abolish the elected offices of state controller and state treasurer. His proposal would make those positions appointed by the governor within the executive branch.

District 36 Assemblyman James Oscarson, R-Pahrump, has submitted two bills draft requests. One is to revises provisions relating to financial support for the Breakfast After the Bell Program in schools, the other is to make various changes regarding campaign practices.