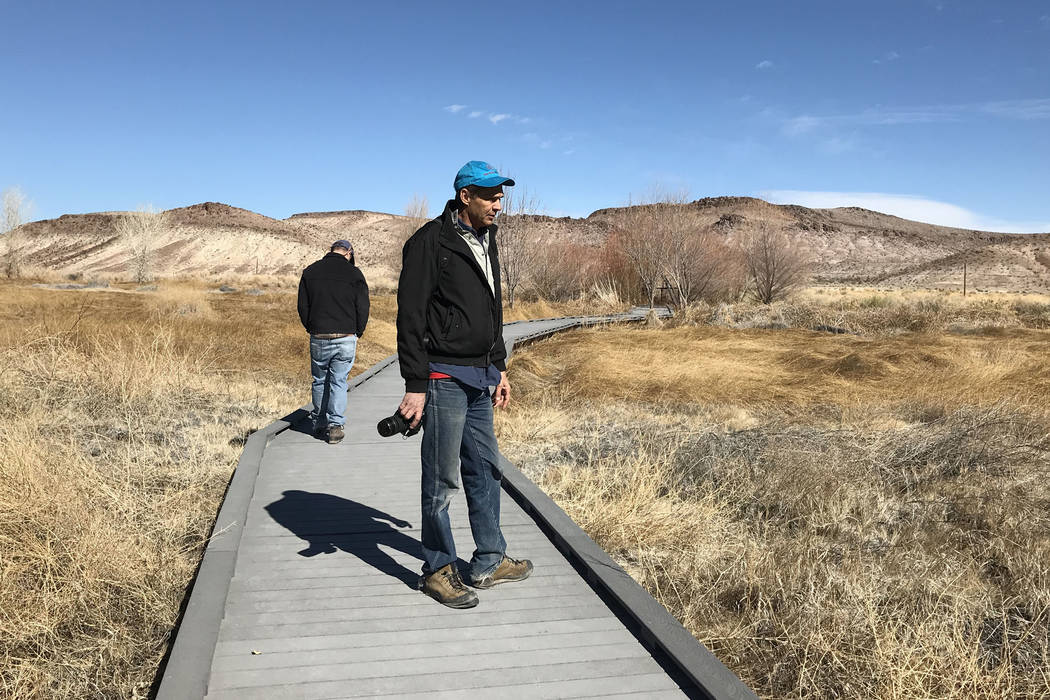 Len Warren, right, and John Zablocki from the The Nature Conservancy stand on the boardwalk at the Torrance Ranch Preserve north of Beatty on Feb. 8, 2019. Henry Brean Las Vegas Review-Journal 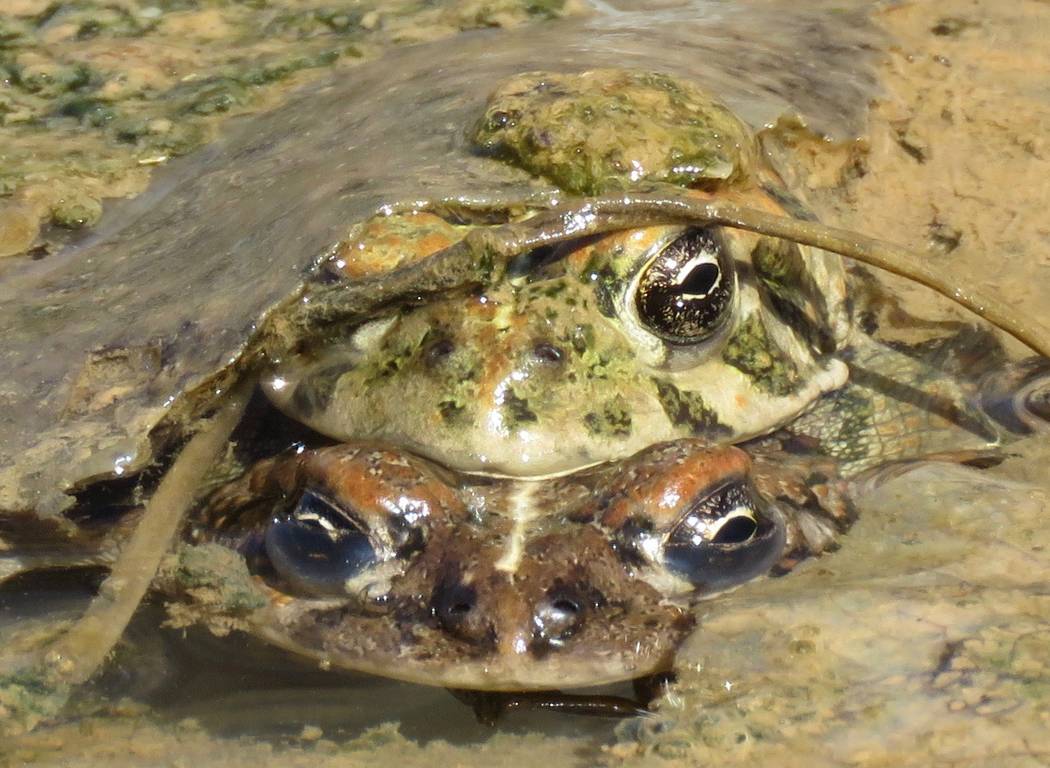 A pair of Amargosa toads photographed on April 11, 2018. Len Warren The Nature Conservancy 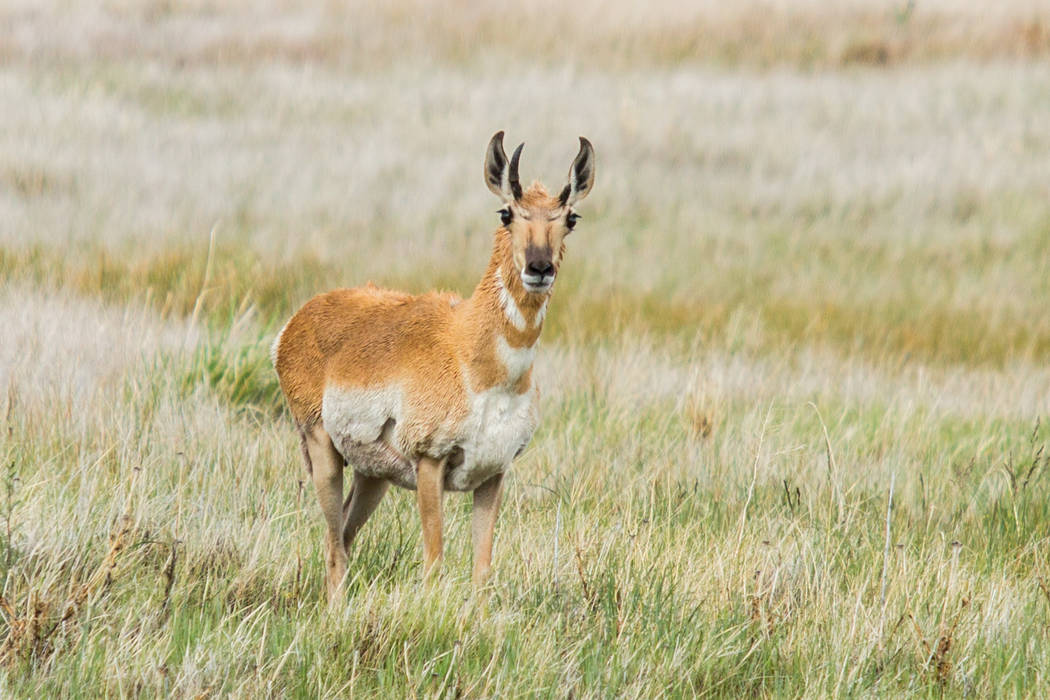 A pronghorn antelope photographed in the Oasis Valley on Aug. 3, 2017. Simon WIlilams The Nature Conservancy 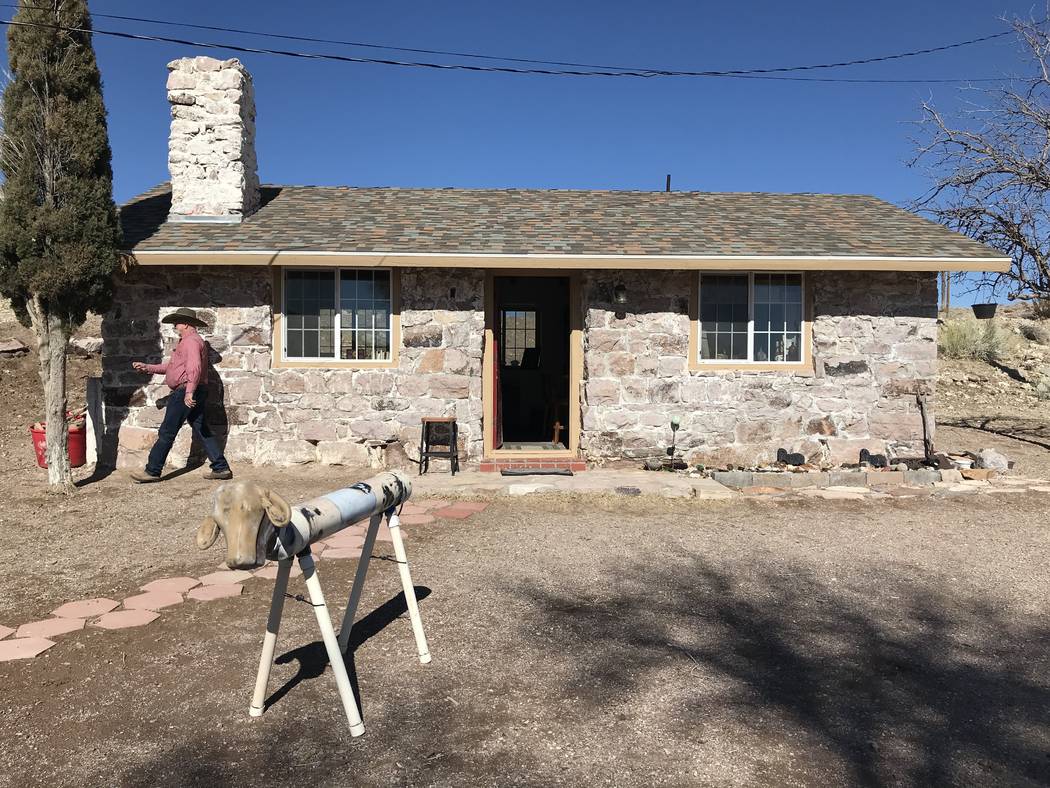 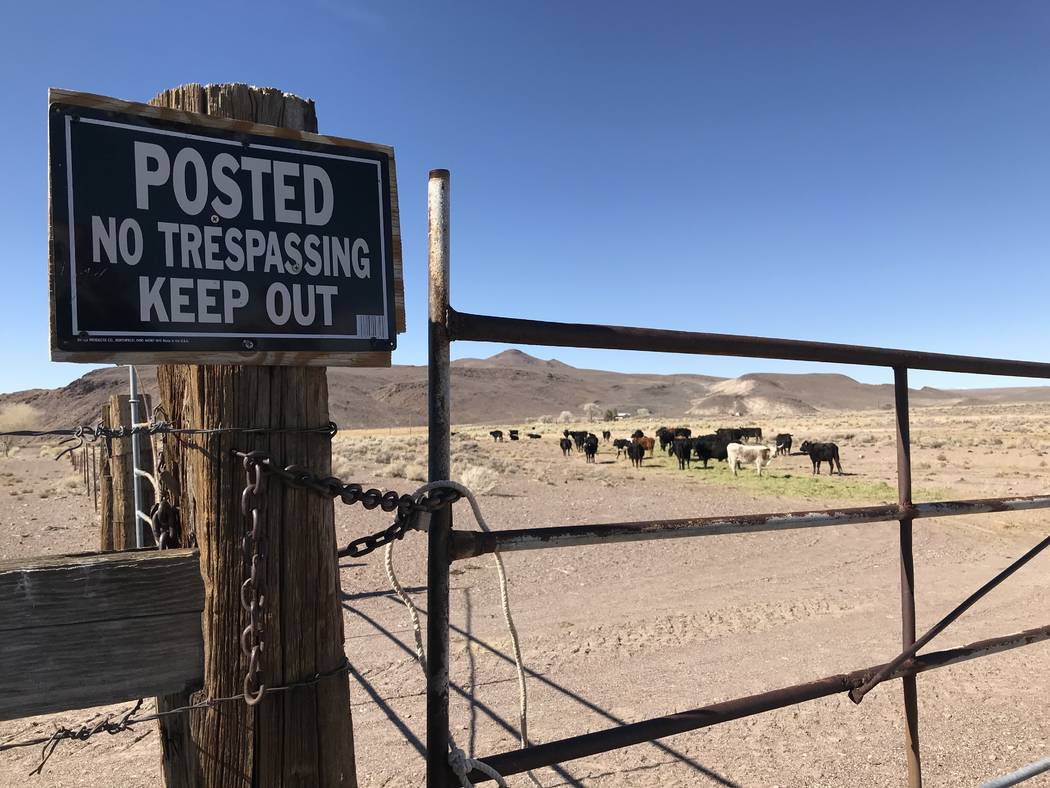 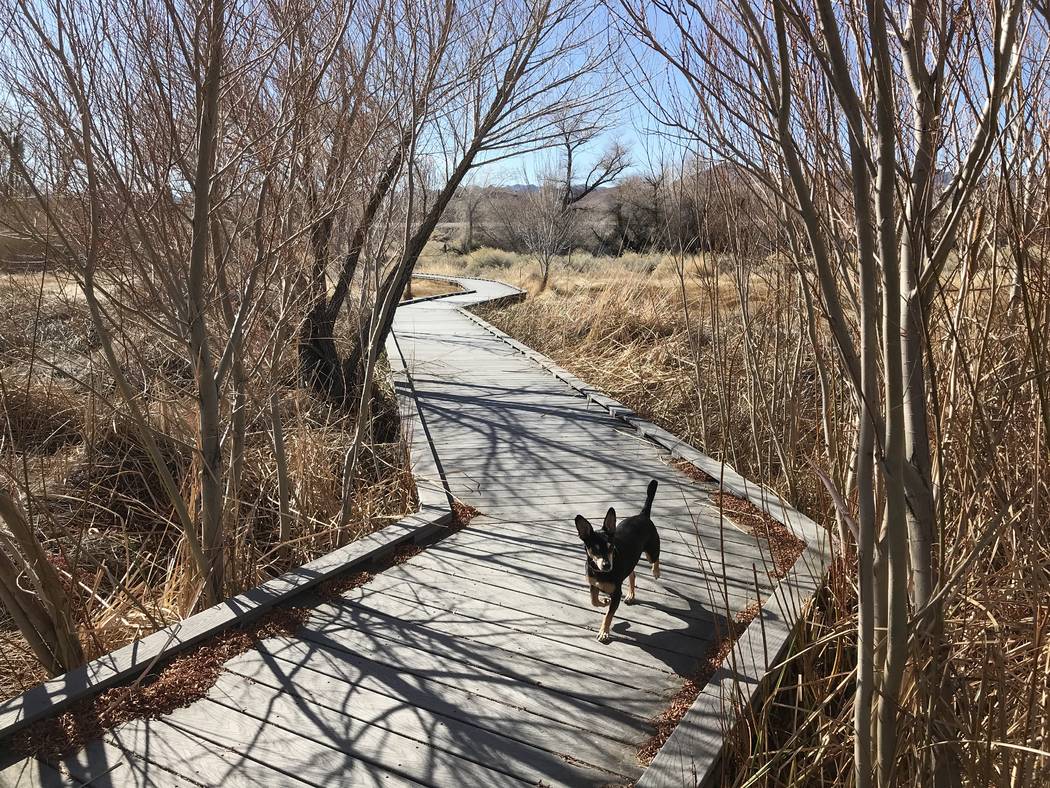 G.G. the dog trots along the on boardwalk at The Nature Conservancy's Torrance Ranch Preserve north of Beatty on Feb. 8, 2019. Henry Brean Las Vegas Review-Journal 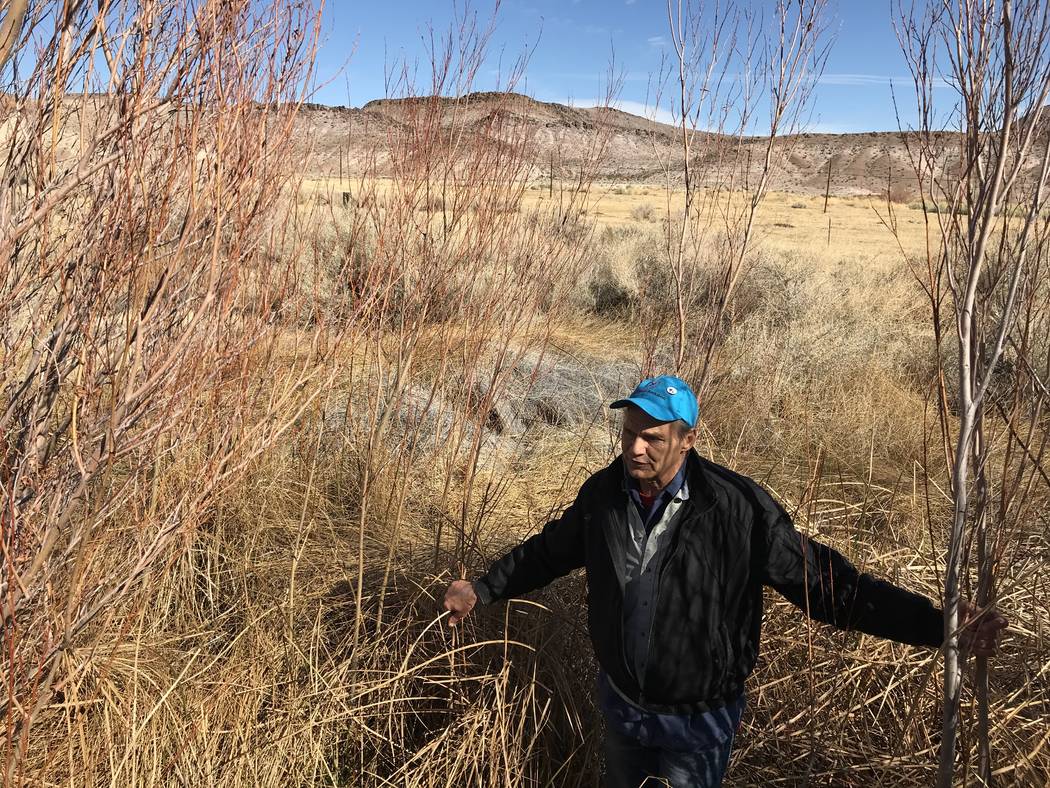 Len Warren from the The Nature Conservancy stands in the waist-high grass at the organization's Torrance Ranch Preserve north of Beatty on Feb. 8, 2019. Henry Brean Las Vegas Review-Journal 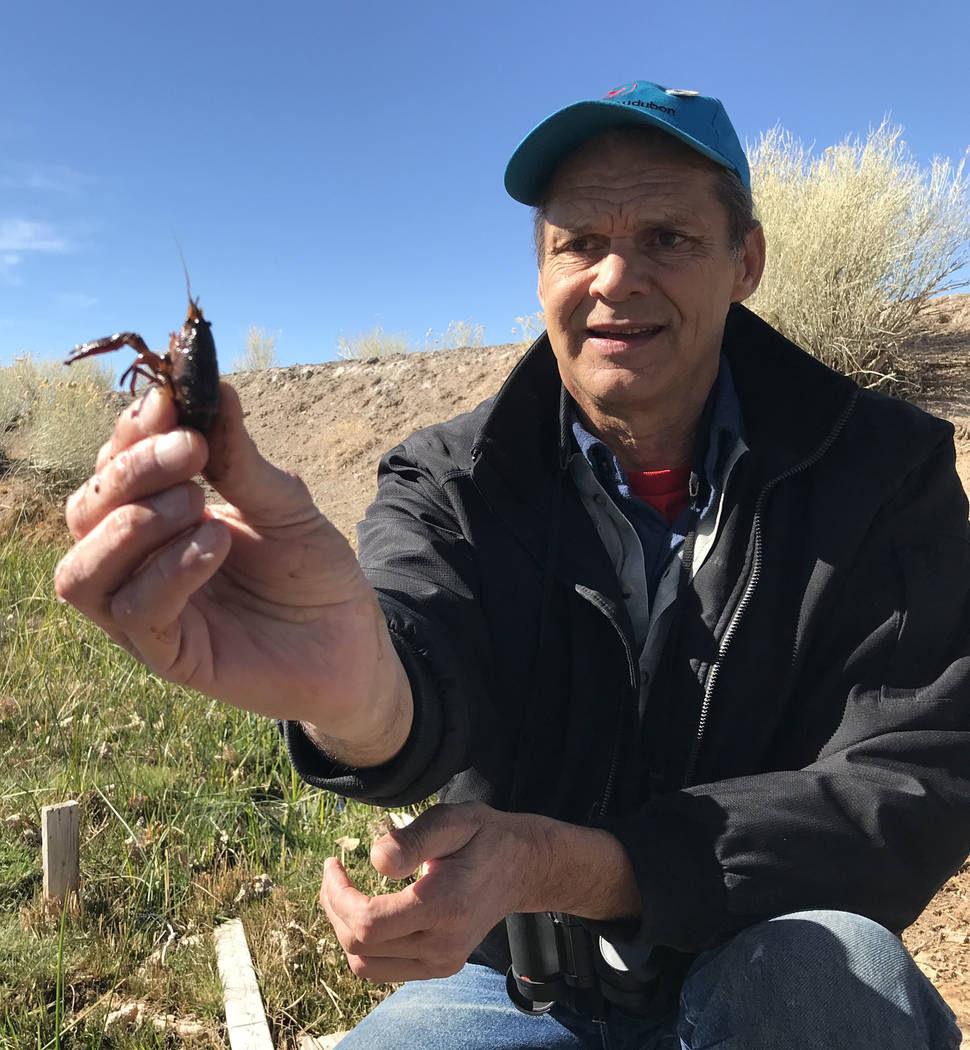 Len Warren from The Nature Conservancy holds up a non-native crayfish plucked from a trap at the 7J Ranch northeast of Beatty on Feb. 8, 2019. Henry Brean Las Vegas Review-Journal 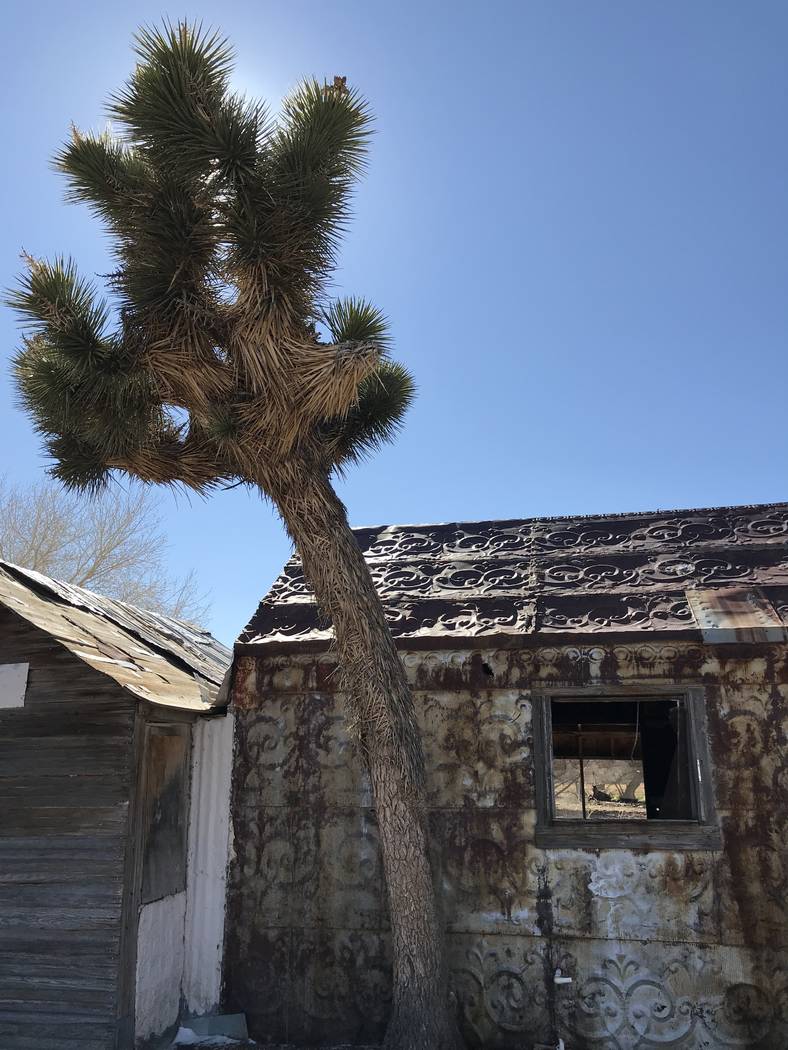 A Joshua tree grows next to an old, tin-covered outbuilding at the 7J Ranch northeast of Beatty on Feb. 8, 2019. Henry Brean Las Vegas Review-Journal 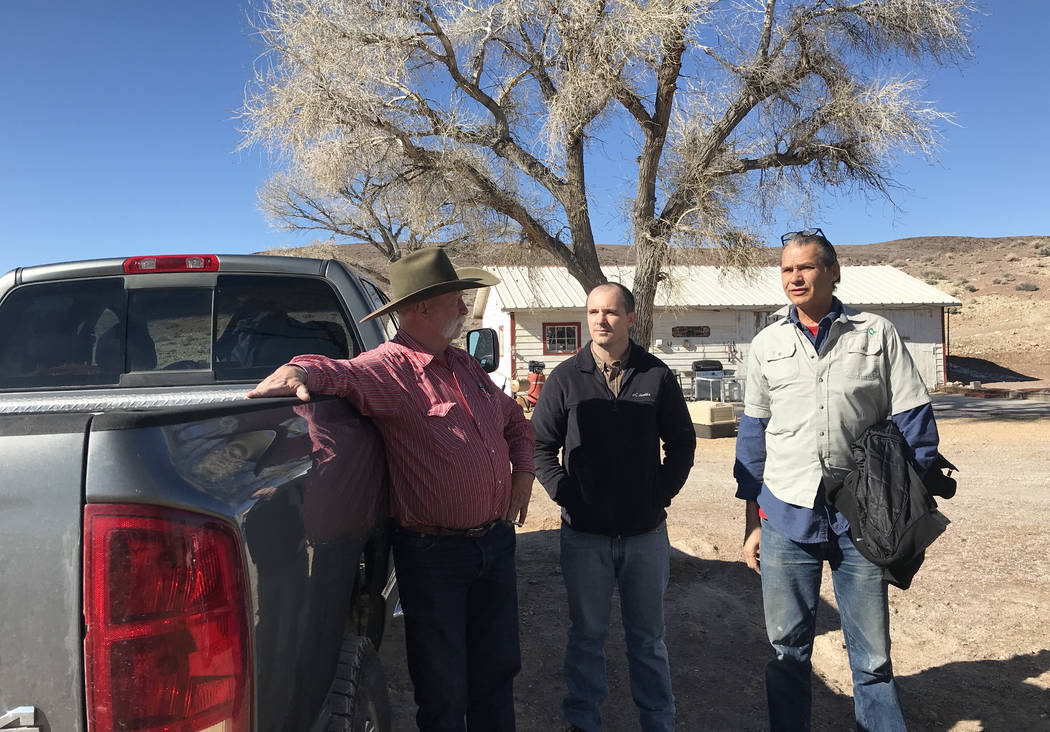 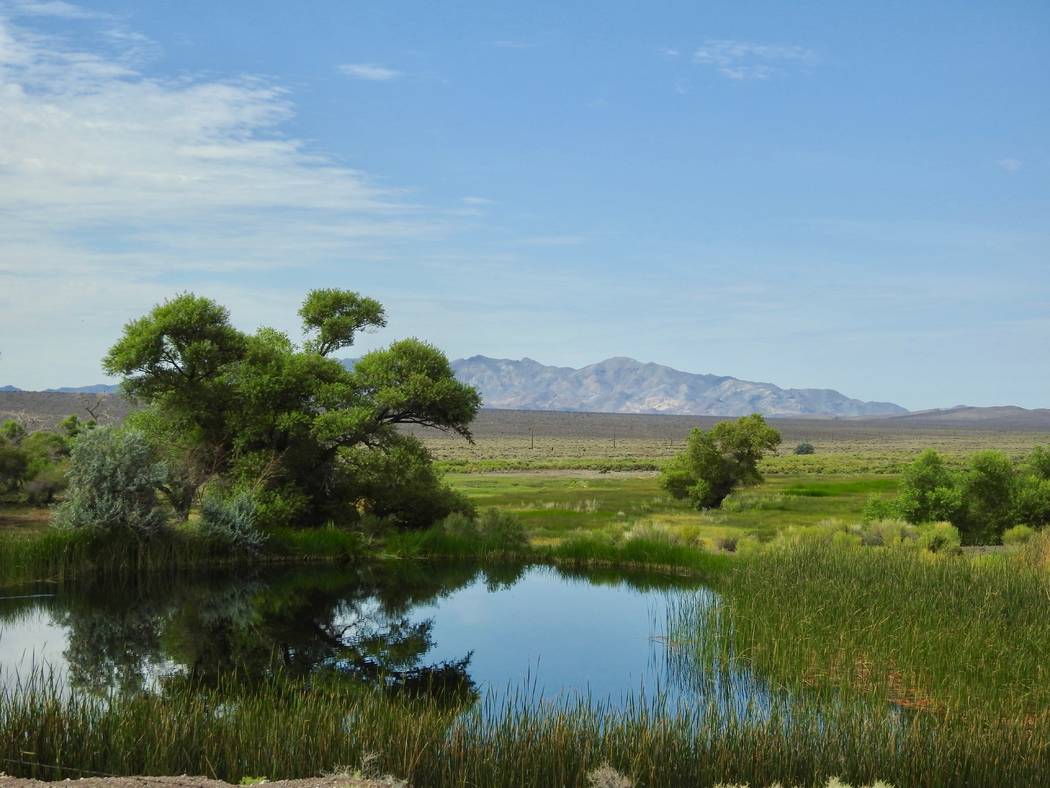 A pond reflects the sky on Aug. 8, 2018 at the 7J Ranch northeast of Beatty. Len Warren The Nature Conservancy 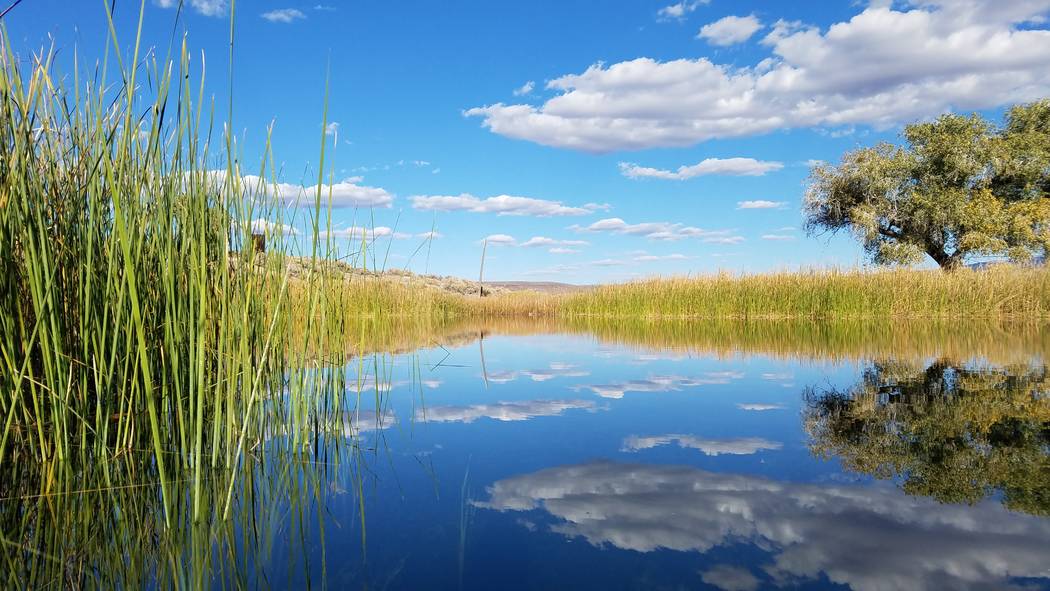 Clouds reflect in the surface of a pond at the 7J Ranch northeast of Beatty on Oct. 31, 2018. Martin Swinehart The Nature Conservancy

Environmentalists are taking over this faded mining town 120 miles northwest of Las Vegas, but many locals don’t seem to mind.

The Nature Conservancy is now the largest private landowner in this part of Nye County, where the national environmental group is working with local residents to recast the area as a preserve for sensitive desert wildlife and a destination for outdoor enthusiasts.

The conservancy closed on its latest acquisition Wednesday: a working, 900-acre cattle ranch at the headwaters of the Amargosa River north of Beatty that could one day become a living laboratory for conservation work, though ranching will continue.

The $2 million purchase more than

doubles its already extensive holdings along the lush ribbon of riparian habitat known as the Oasis Valley.

“I don’t have a concern with that like I might have 10 years ago, because they’ve demonstrated they’re willing to work with us. That’s important to us,” said David Spicer, one of the conservancy’s neighbors near Beatty.

Spicer is a rancher, miner and businessman who has lived in the Beatty area nearly all his life. He’s also the leader of a local, decades-long campaign to protect the native Amargosa toad and keep it off the endangered species list.

He said the Nature Conservancy has been an important partner from the beginning.

“We’ve had a relationship with them for more than 20 years now,” said Spicer, who heads a nonprofit of his own: Saving Toads thru Off-Road Racing, Ranching &Mining in Oasis Valley or STORM-OV for short.

As a result of the grassroots effort in Beatty, much of the rare amphibian’s habitat along the river has been protected without cutting off access to the land or burying local residents in red tape, Spicer said. The toad population is now considered healthy and stable, with numbers in the thousands.

Through purchase or donation, the conservancy has acquired eight parcels totaling more than 1,600 acres in and around Beatty since 1999.

The group has mostly avoided the sort of backlash environmentalists often face in rural Nevada by being a good neighbor, said Ryan Tweney, who retired to Beatty 14 years ago and now chairs the town’s library board.

“The Nature Conservancy has been a huge help to the town in terms of preserving what we need to preserve,” he said. “I think it’s great.”

And it doesn’t hurt that the nonprofit organization insists on paying taxes on its holdings, the way any other private landowner would, he said.

The conservancy’s newest property in the area could be the most important, said John Zablocki, Southern Nevada conservation director for the group.

Tucked away behind the hills northeast of U.S. Highway 95, the 7J Ranch is dotted with ponds, wet meadows and rich pastureland fed by more than a dozen springs. The ranch is bracketed by Joshua trees on one side and sagebrush on the other, marking the transition zone between the Great Basin and the Mojave Desert.

Zablocki calls it “the crown jewel of the Oasis Valley.”

Len Warren, Amargosa River project manager for the conservancy, has lots of ideas for the 900-acre spread. As he walked around the property on a recent Friday, he pointed out where native trees could be planted to provide bird habitat or where a pond stocked with bass might be converted into a safe haven for the Amargosa toad and endemic springfish like the Oasis Valley speckled dace.

“Our dreams are for it to be turned into an example of how you balance livestock grazing, environmental research and habitat restoration,” Warren said. “We don’t have all the answers yet.”

Zablocki pictures the ranch as a research station, where scientists from the conservancy and elsewhere can conduct real-world experiments on private land without having to go through lengthy federal regulatory reviews.

“We could try out solutions on our own property,” he said.

Home on the range

Some things won’t change at the 7J.

Zablocki said the property will continue to house a livestock operation, with the previous owner running cattle there under a lease with the conservancy.

Longtime Nevada rancher Hank Brackenbury said he bought the 7J about four years ago. “Poverty” is what persuaded him to sell the place to the environmental group, he said.

“I had a pretty big ranch payment,” he said.

This way, he gets to keep raising beef cattle on the land, and the Nature Conservancy gets a crash course in ranching from someone who knows a thing or two.

“It’s all here. The potential is all here,” Brackenbury said. “It’s been a good ranch for a lot of years, and if it can continue to be a good ranch, that’d be good.”

The purchase price included grazing rights on 280,000 acres of federal land surrounding the ranch, much of it unfenced and bordered by a massive Air Force bombing range to the east. The property is also within sight of Yucca Mountain, proposed repository site for the nation’s high-level nuclear waste.

“I tell everybody, ‘I live closer to Yucca Mountain than anyone. I’ll be the first to glow,’” Brackenbury said.

There are about 75 head of cattle on the property right now, he said, but the range can handle more than twice that amount when conditions are good.

Zablocki said the conservancy’s new pastures also could serve as a regional “grass bank,” providing relief forage for other Nevada ranchers stricken by wildfire or drought.

“We actually need grazing as a rangeland management tool,” he said.

Zablocki said this should be the conservancy’s last big purchase in the Beatty area for a while.

“Our goal was never to buy up the whole town,” he said. “We want whatever we do to be a benefit for this community.”

To that end, the organization is working with a prominent local business owner on a dog park and trail system that will lead visitors down to the Amargosa River from the edge of his parking lot. Warren and company also have plans for more boardwalks, signs and native trees at the Torrance Ranch Preserve, the conservancy’s oldest habitat restoration project in the area.

The broader goal is to find something new to sustain a once-proud hard rock mining town that’s fallen on hard times. Ecotourism could be the answer.

Warren said Beatty, which is home to fewer than 1,000 people, already serves as a gateway community of sorts for nearby Death Valley National Park.

“We want to entice people to stay a little longer and come back again,” he said.

Spicer has invested heavily in that idea. Over the past five years, he has developed more than 50 miles of mountain bike trails on his ranch and the surrounding public land, and he’s taken to hosting events ranging from Boy Scout campouts to scaled-down versions of Burning Man. He sees what he’s doing as a way to help the environment and the economy in his beloved valley.