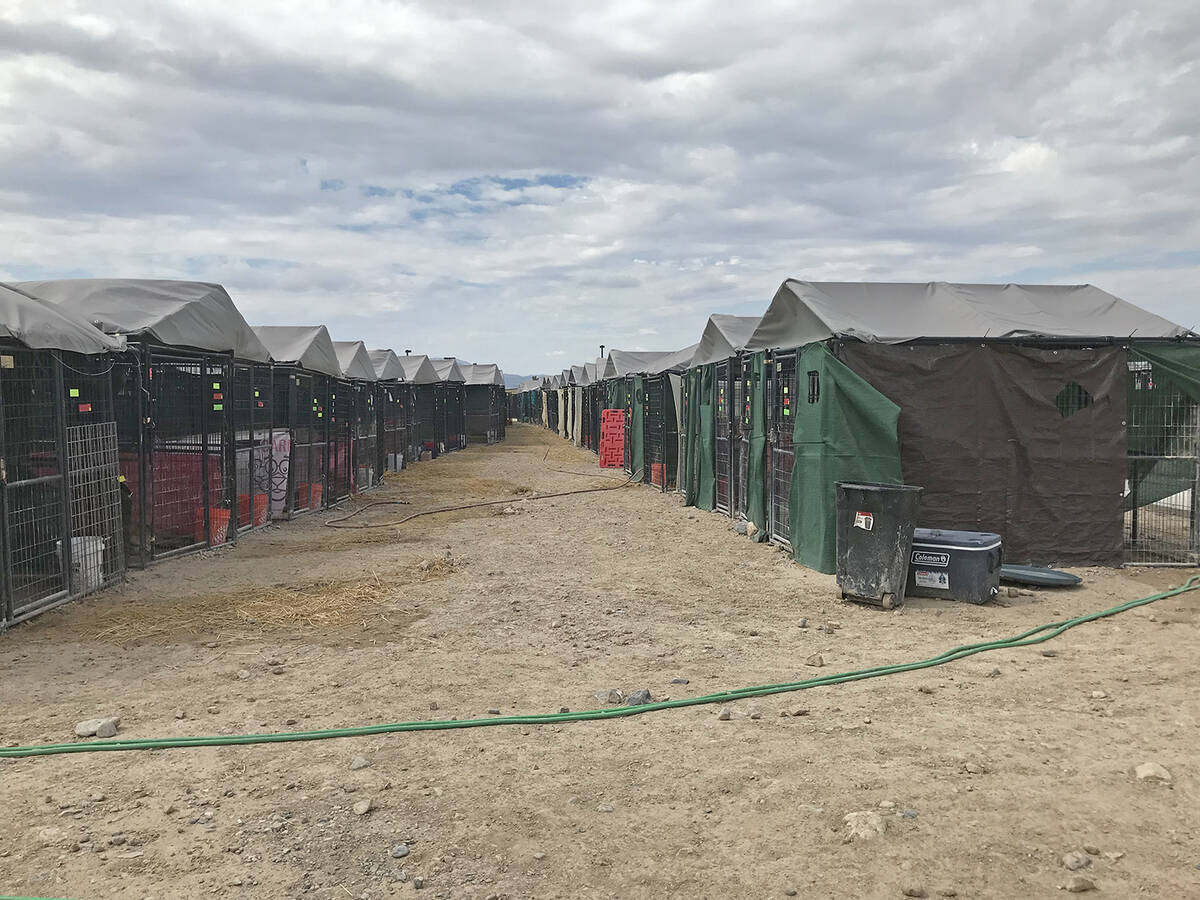 Robin Hebrock/Pahrump Valley Times Housing the 300 dogs seized in Amargosa is no easy feat and the Nye County Animal Shelter has had to resort to utilizing a series of outdoor kennels, covered with shade cloth, for the purpose. 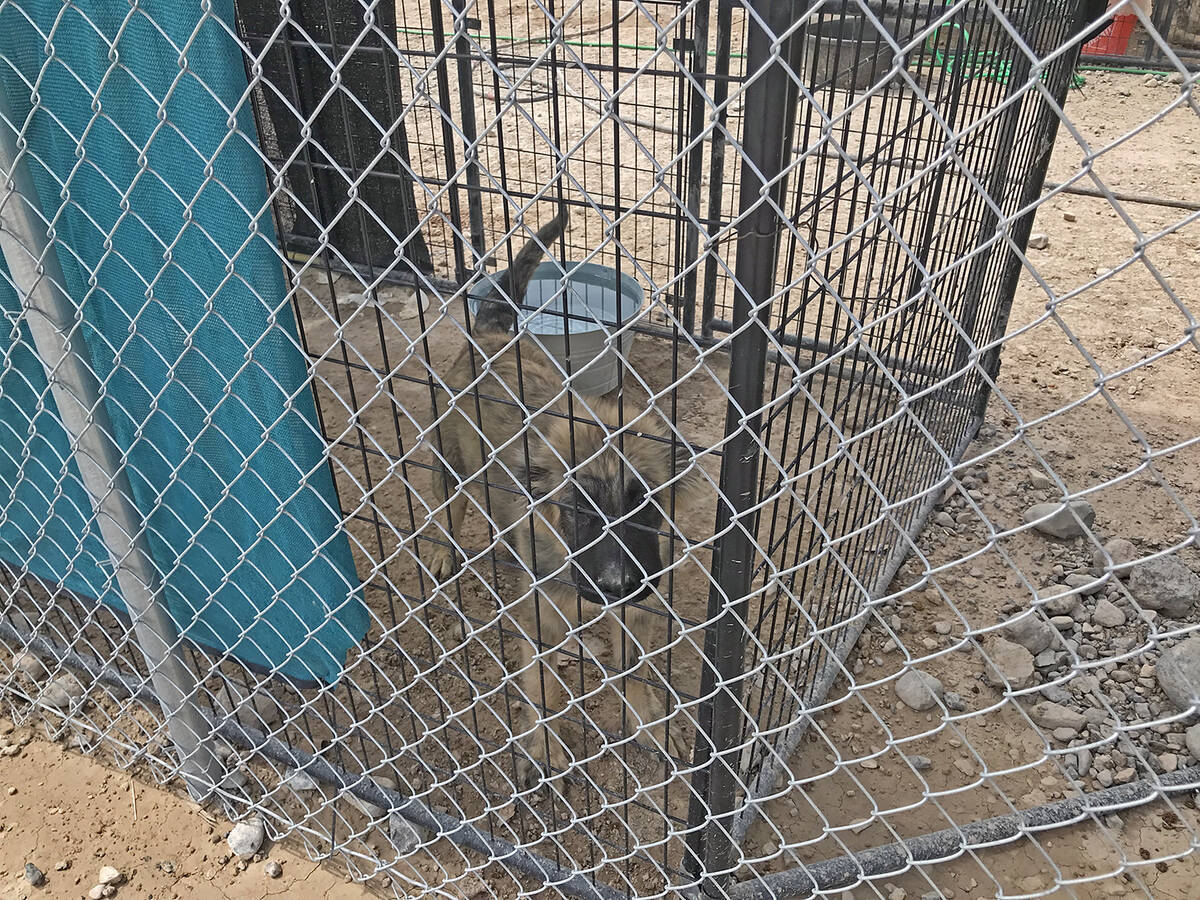 Robin Hebrock/Pahrump Valley Times This photo, taken Tuesday, September 13, shows one of the 300 dogs seized from a property in Amargosa last month. 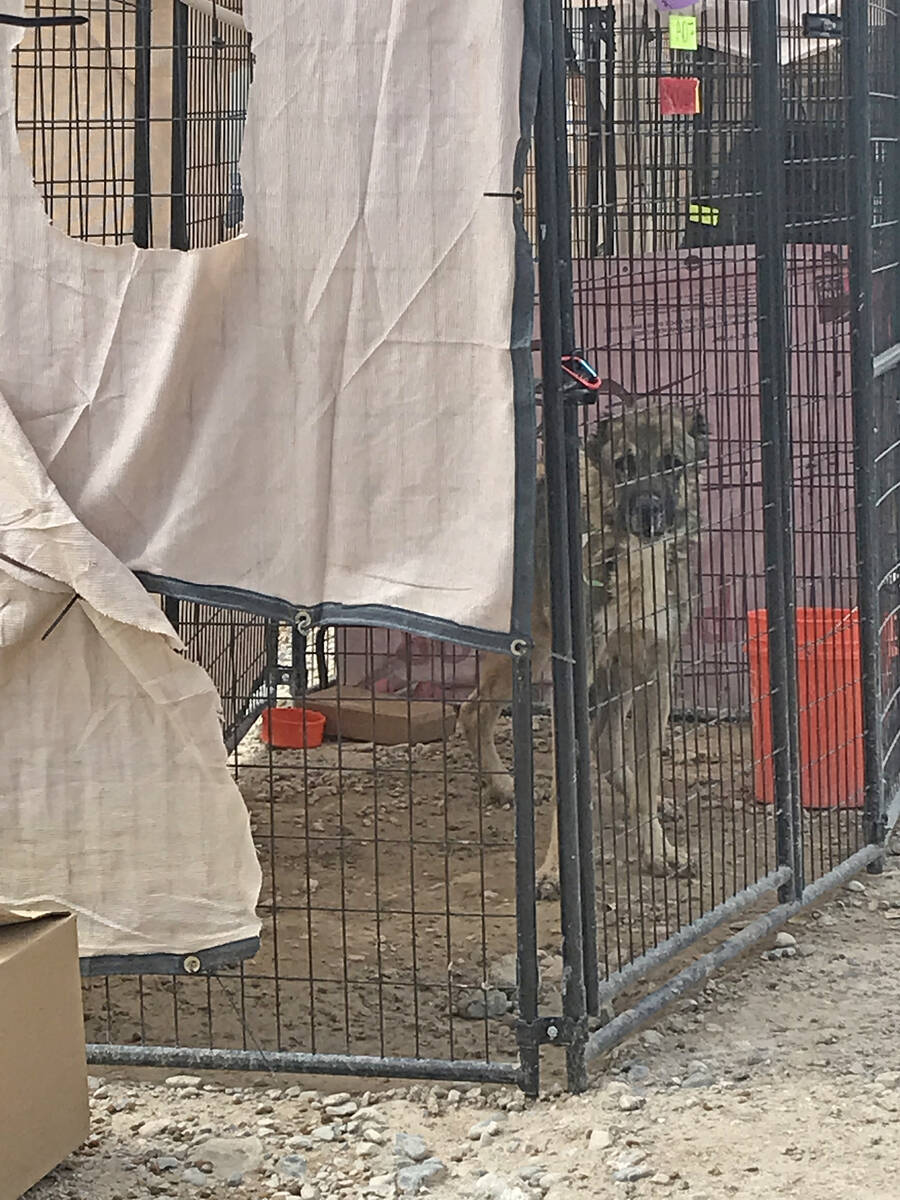 Robin Hebrock/Pahrump Valley Times Two Amargosa residents are facing felony charges following the seizure of hundreds of neglected and abused canines, such as the one pictured here.

The Nye County Animal Shelter went from having more than 70 animals to roughly 370 animals in less than a week, after the discovery of an Amargosa Valley home where dogs were being abused.

On Sept. 2, the American Society for the Prevention of Cruelty to Animals found multiple dead dogs buried on the property, according to forensic veterinarians. The forensic team is helping with necropsies on those animals to determine causes of death.

A few days before, the Nye County Sheriff’s Office was granted the authority to take the surviving 300 dogs to the shelter.

Housing was a challenge because the shelter was only built to hold 100 animals in the building, according to Tasha Crabtree, manager of the Nye County Animal Shelter.

Moving 300 dogs to the shelter and building an outdoor area in the middle of summer seemed more like moving a mountain, she said.

At the animal shelter, concrete was laid to create a stable ground surface for the dogs and their cages, and to provide a surface that can be sanitized and can support a raised bed so dogs wouldn’t have to lay on the ground, Crabtree said.

And a heat warning in Southern Nevada that lasted about a week worried Crabtree.

“It was rough, and I was concerned over the dogs,” Crabtree said. “The ASPCA extended our team and added eyes on the dogs, they were all constantly monitoring for heat stroke.”

The dogs being kept outside because of shelter capacity restrictions were taken on ice walks, and sprinkler misting systems also helped keep them cool.

“It’s hard for dogs, they aren’t like humans,” Crabtree said. “They can only pant and sweat through their paws.”

But one thing Crabtree knew was they were going to need more veterinarians to care for all of the new dogs.

The ASPCA stepped in, sending 29 responders to support this case on Sept. 1, according to Teresa Ladner, senior director of investigations for the ASPCA.

The organization is also helping with evidence collection, crime scene processing, legal aid and forensics exams, and medical and behavioral support for the dogs.

“Many of the dogs rescued in this case appeared to be emaciated and suffering from severe, untreated medical issues when removed from the property,” Ladner said. “Our medical team on the ground is assisting the Nye County Sheriff’s Office by helping to provide medical treatment for the dogs.”

More than 75 percent of the dogs have received full veterinary examinations, Ladner said. Every dog has been assessed to address any immediate medical needs while others also have received veterinary forensic exams to support the ongoing criminal investigation.

“We will remain on the ground for the foreseeable future to continue providing ongoing medical and behavioral care for the dogs,” Ladner said. “We will also continue to provide investigative and legal assistance remotely to further support the investigation and prosecution and to ensure the best legal outcome for these animals.”

The ASPCA hopes that many of the Caucasian shepherds will be adopted into new, loving homes once the lengthy investigations are over.

“It’s amazing, ($67,000) to me is a lot of money,” Crabtree said. “When you’re talking about the grand scale of building a temporary emergency shelter, (the money) can disappear really fast. It’s amazing how they’re making a difference in this community.”