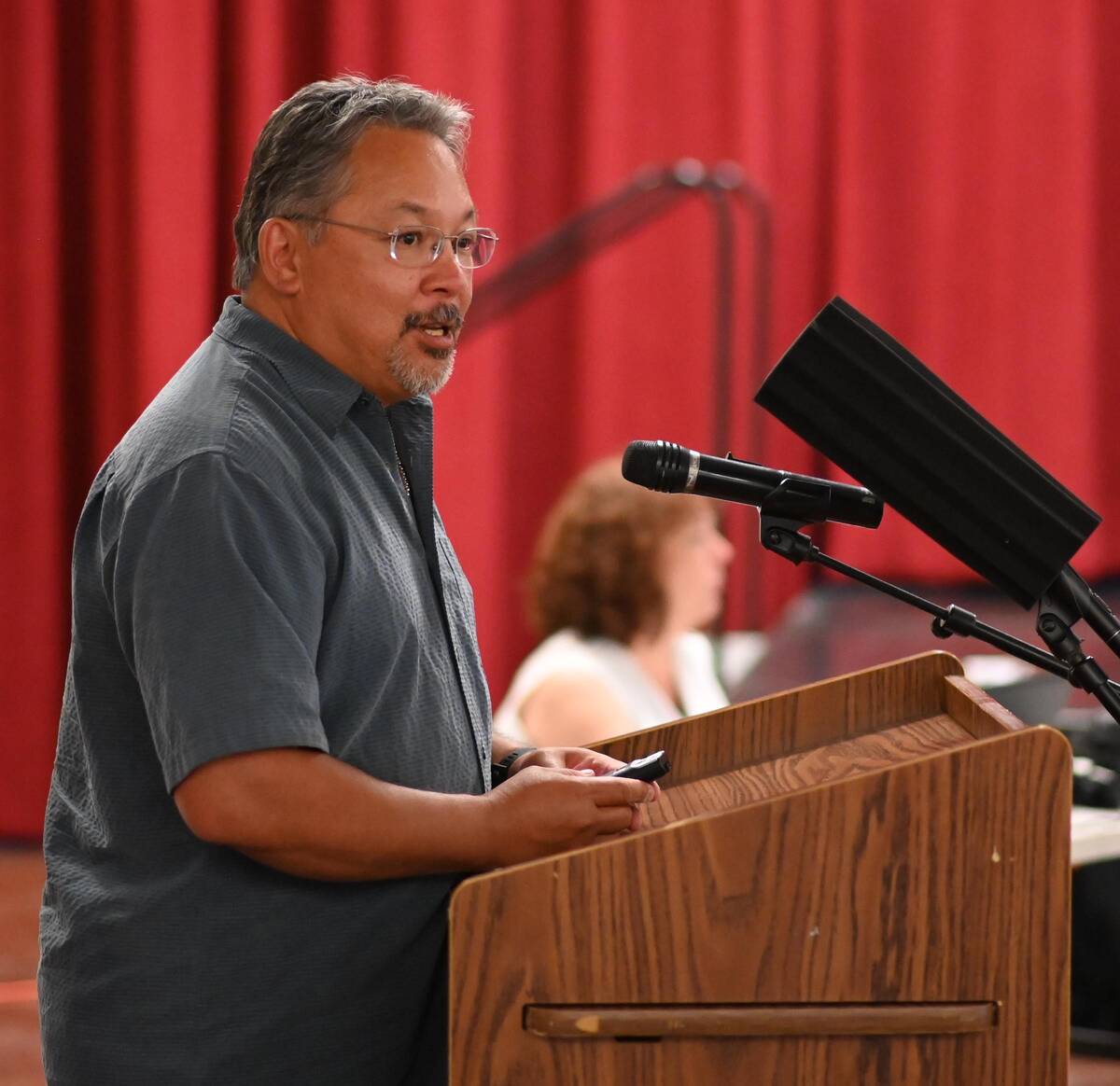 (Richard Beatty/Special to the Times-Bonanza) Jim Wickens, vice president of operations for Augusta Gold Corp., addresses the Beatty Town Advisory Board on plans for the CR Reward mine about 7 miles south of town, and the Bullfrog mine, located next to Rhyolite Ghost Town at a meeting on July 11, 2022. 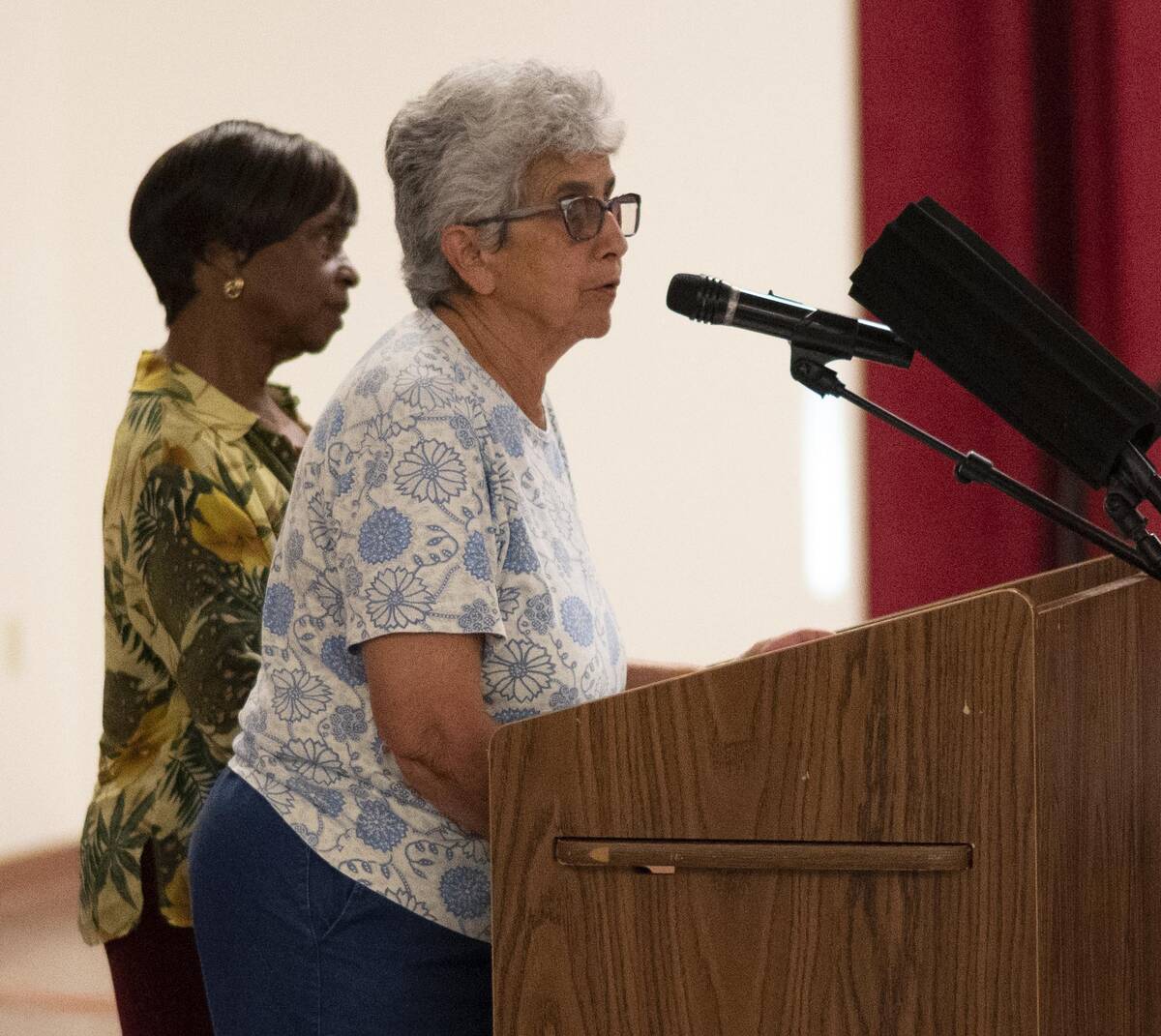 Plans for the development of two more gold mines were presented to the Beatty Town Advisory Board on Monday.

Wickens said that having the two mines located close together helps with the operating costs of both, and that some employees will be working both mines. They have a combined expected operational life of around 12 years. Both will be heap leach operations.

The company expects that cash flow from the CR Reward mine will help fund construction of the Bullfrog.

At the Bullfrog mine they will be working ore that was not profitable when Barrick was operating there, but the high price of gold and advances in technology have changed the picture.

Wickens acknowledged that mine operations will eliminate some of the recreational trails in the area and said that the company wants to work with the community to mitigate this impact. He even suggested that some of the geological features mining will create might be turned into attractions when operations cease.

He also said that mining activity would not impact the stability of the Rhyolite ruins or of the Tom Kelly Bottle House, noting that Barrick had operated safely in that regard.

The two mines combined would employ about 200 workers, and the company will be looking into housing options. They will also be looking into any need for improvements in water and electrical power supplies.

Augusta Vice President for Environmental and Permitting Jim Pappas said that they would be looking to purchase or lease water rights from the Amargosa basin.

Concern was expressed about the sad condition of the Rhyolite road, which is riddled with pot holes and is being used by the company for the hauling of water and equipment. Wickens said they would be working with government agencies on the condition of the road.

Rhyolite caretaker Karl Olson reported that a traffic count by the BLM estimated that 2.57 million people have visited Rhyolite on that road since January 2021.

The board also heard a presentation from Susan Moore and Delores Joiner, of Pahrump, who are looking to form a chapter of the National Federation of the Blind in Pahrump and want to include Amargosa Valley and Beatty. They spoke of the benefits in skills, knowledge, and resources that the organization can provide for the visually impaired and extended the invitation for Beatty residents to take part.

The board voted to send a letter to Bureau of Land Management State Director Jon Raby requesting a moratorium on solar energy projects in and around Beatty until the Nevada-Wide Resource Management Plan (RMP) revision is complete.

Laura Cunningham pointed out that the RMPs from the Tonopah and Pahrump field offices had not been updated since 1997 and 1998, respectively. She said that “tens of thousands of acres of applications that overlap with our recreation zones” should not be decided using plans that are out of date.

Board Chair Erika Gerling pointed out that solar energy projects are “a new element not covered in those 25-year-old plans.”

Gerling asked that, in addition to any grammatical corrections to the draft letter, that a request be added to establish a Special Recreation Management Area around Beatty, and this was included in the motion approving the letter.