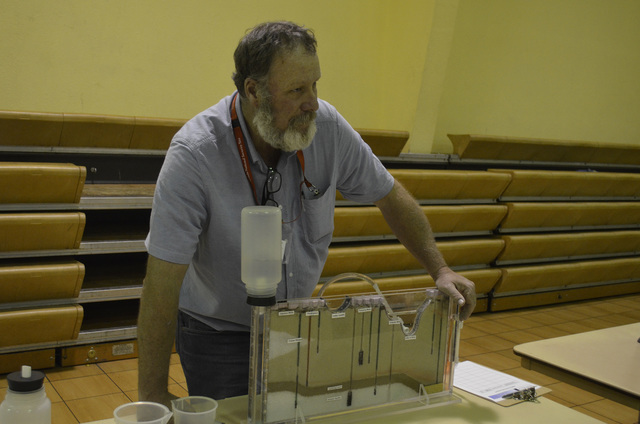 The seventh annual Groundwater Open House took place in Amargosa Valley on Tuesday. A number of scientists were on hand to present information to residents about water testing in Nye County. Daria Sokolova / Pahrump Valley Times 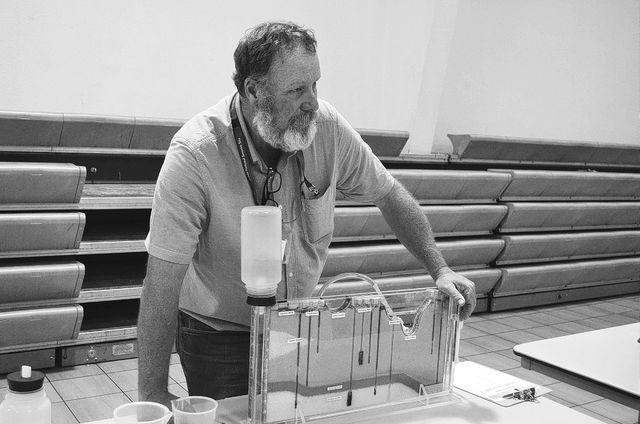 A score of state and county scientists sought to assure Nye County residents that their water hasnt been affected by underground nuclear testing at the Nevada National Security Site.

The seventh Annual Groundwater Open House took place on Tuesday at the Amargosa Community Center in Amargosa Valley. A number of scientists at the event presented information about ongoing water testing at the site.

Weve really found nothing new per se from groundwater flow or transport (during last year). Nothing that tells us all the water was going a different direction or was it going faster. What weve actually done is just added to the amount of information we had, Wade said.

Over 900 nuclear tests were conducted in Nevada between 1951 and 1992 after the Atomic Energy Commission designated a big portion of land 65 miles northwest of Las Vegas for atmospheric atomic testing. The Nevada National Security Site is one of 12 sites where the DOE still does work.

In August 2015, Nye County received a five-year $1.27 million grant from the DOE for a Tritium Groundwater Monitoring Program that covered the cost of the procedure.

The ten wells sampled Amargosa Valley and Beatty under the program in December showed undetectable levels of tritium, according to the recent lab results.

Wade said studies conducted as part of the environmental management program also look for other isotopes.

When theres a nuclear weapons test, one of the first indicators is mobilization of tritium from the test, he said. So we study and look for tritium in our groundwater samples because we found it to be most mobile in groundwater. But we also look for a whole bunch of other radio isotopes.

Theres no flow area that goes to Pahrump, Wade added.

We find that because of geologic structures, there isnt really a risk for any test site groundwater flow and transport going to the city of Pahrump. Its just hydrologically disconnected, he said.

Bill Wilborn, director for UGTA sub-projects, said that some mistakenly think that the tests have contaminated the aquifer and the water flows to the Death Valley National Park or Las Vegas.

When it relates to Las Vegas, its never going to get there, its a completely different watershed. As far as reaching Death Valley or Amargosa Valley or Beatty, its going to take a long period of time, he said.

Officials previously said tritium was detected in one of the wells west of Pahute Mesa, where 85 nuclear tests were conducted between 1965 and 1992.

The well is located on the Nevada Test and Training Range, 2,350 feet west of the NNSS boundary, and approximately 23 miles northwest of Beatty.

The tritium level in the well was 10,600 picocuries per liter in 2009, which is below the Safe Water Drinking Acts limit.

At some point in the far future we are going to address any contamination that comes off the site toward any public receptors, but at this point, we only see the small amounts coming off the test site boundary and they are below safe water drinking standards, Wilborn said.

After 200 years, all the tritium is going to die off. Some of the heavier, longer-lived radionuclides that are in these tests will take much longer to get through, he said.