Saturday marked the first day of early voting in the Nevada primary elections, and across the Las Vegas Valley enthusiastic residents came to their nearest malls and grocery stores to cast ballots.(Las Vegas Review-Journal)
By Jimmy Romo Pahrump Valley Times
May 31, 2022 - 3:16 pm 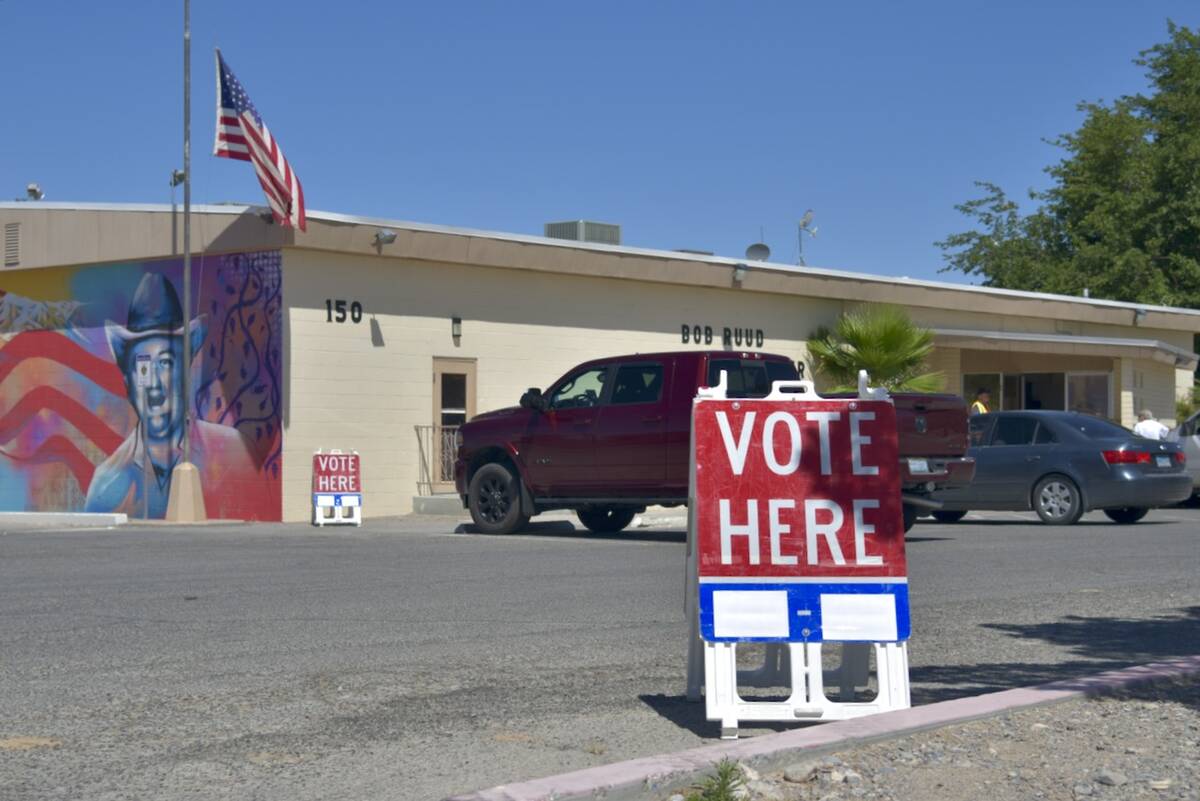 Early voting started on May 28 at the Bob Ruud Community Center in Pahrump. Locals are allowed to park in front of the building, as there was no line for voters on May 31. (Jimmy Romo/Pahrump Valley Times)

Pahrump Valley residents came to Bob Rudd Community Center to cast their early ballots on Tuesday, where some candidates watched voters from the parking lot. Tents are set up outside of the center, and candidates are allowed to be 100 feet away from the voting booth to engage with voters before they head inside to cast their ballot.

Voting in Nye County is off to a sluggish start with roughly 225 ballots over the weekend.

“The turnout was pretty slow,” Nye County Clerk Sandra Merlino said. “It could have just been the Memorial Day weekend and people had other things to do.”

Rachel Aldana, Nye County chief deputy clerk, who’s been running the voting center at the Bob Rudd Community Center said that the weekend was calm and slow. But voters were still coming in to cast their ballots, she said, and they’ve been happy with the ease of it.

“I’ve only missed out on two election,” voter Gary Sorensen said on Tuesday.

He believes early voting is important because it keeps the lines down on Election Day.

John and Susan McClantchy said they voted early on Tuesday to make it easier for counters to get ballots and reduce mistakes. They believe the process can be slow and they wanted to ensure their votes are counted properly.

Early voting is helpful to some voters, including Brenda Burt who said she likes to vote around her own schedule.

Kathy Mattocks made sure to submit her mail ballot to the drop-off box at the community center on Tuesday. She’s confident that her ballot will count, but still is not so sure about sending it by mail.

Most voters on Tuesday chose to use the voting booths inside the center to cast their votes.

Thomas and Joanie Grham said the process was very efficient.

“We early vote because there are no lines,” the Grhams said.

Still, at least one voter on Tuesday said they were skeptical of using electronic machines at the polls.

“I hope good people are honestly couting the votes,” said the voter, who declined to give their name.

Harris and Patricia Brokkesaid their voting experience was smooth and are confident their votes will be properly counted. Others also expressed confidence in the system.

“My vote is good, I saw it get printed and confident it got in,” said Darla Holt.

After voting at the booth, the ballots are printed out and displayed to voters to confirm their answers before being submitted.

Voting locations and more information are available on the county’s website.