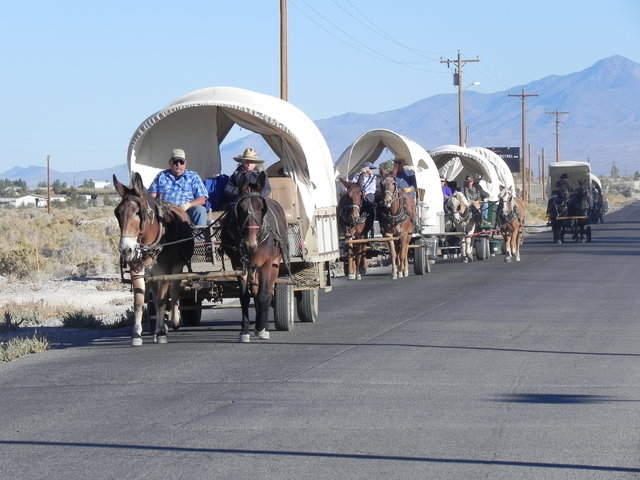 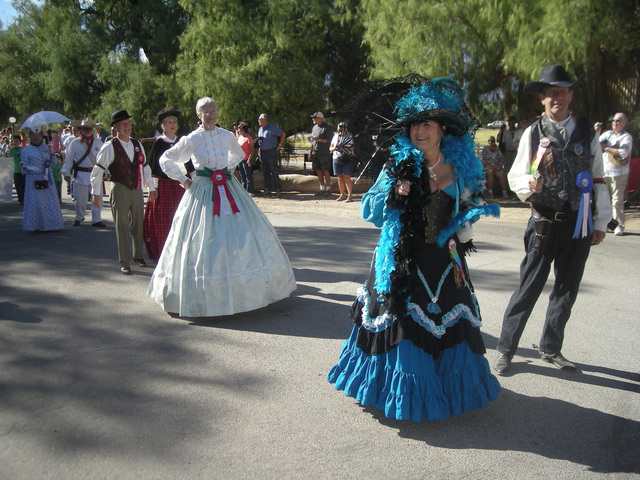 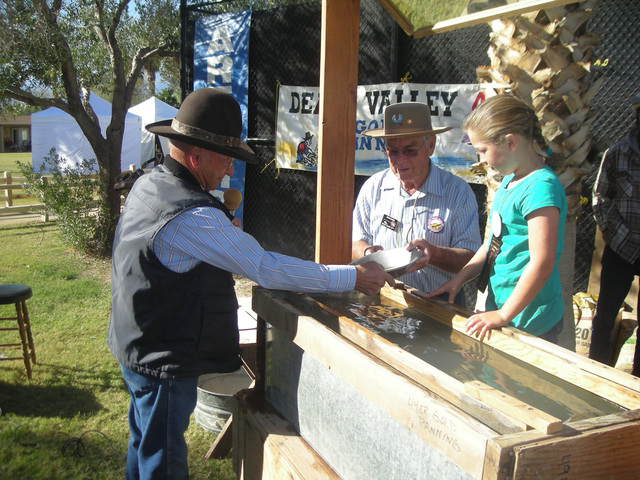 Six mule team wagons headed out from Fred and Cathy Cressler’s farm at the south end of Homestead Road on a crisp autumn Tuesday morning, attempting to recreate the journey of the pioneers who took a route to the California gold rush through Death Valley in the winter of 1849-50.

The group, Corral 14, was founded in 1967 by riders who decided they were getting past the age they should be riding horses and turned their attention to wagons and Shetland ponies. They were such a hit at the annual 49ers encampment in Death Valley they returned almost every year since. The teamsters have replaced Shetlands with mule teams pulling full-size wagons. Rubber tires replaced wooden wheels.

A wagon driver Tuesday morning said the group hopes to make 16 miles per day, traveling from Homestead Road through the dry lake bed via a remote route into California. They camp at Tecopa Hot Springs on their first leg from Pahrump. Corral 14 rides in the parade during Old West Days in Shoshone, Calif., this weekend. Then the wagons are hauled by trailer around the mountains to the Ashford Mill for the final ride into Death Valley for another parade next Friday morning during the 49ers Encampment at Furnace Creek in Death Valley.

The mule train will fit right in at the annual 49ers encampment, which includes a Grassy Green Pickin’ and Fiddlin’ Contest, a parade with an oldtime costume contest the next day. Gold panning, a mineral and craft show, a western art show and nightly musical acts focusing on the best western tunes of all time are also part of the festivities.

Dave Stamey is the master of ceremonies for this year’s concerts Friday and Saturday night by the Old Dinah Campfire. The Old West Trio earned the Will Rogers Award for 2011 Best Western Musical Group of the Year. Belinda Gail, one of the most sought-after women performing western music today, will be there.

True West magazine 2013 best solo musician Mary Kaye, a popular performer at past 49ers Encampments, will return this year. Amber Cross made her first appearance at last year’s encampment, her debut album was released in 2013.

Andy Nelson is a modern-day cowboy named Western Music Association’s Male Poet of the Year in 2006 and 2013 who attends numerous cowboy poetry gatherings. Rick Hartman and Todd Maddox, known as the Kuddabin Brothers, have been entertaining at the encampments for years.

The duo Southcoast has performed all over events in Southern California over the past five years.

For the amateurs, the Grassy Green Pickin’ and Fiddlin’ Contest registration starts at 8:30 a.m. Saturday, Nov. 8, and starts at 9:30 a.m. The Old Time Fiddlin’ Contest begins at 1 p.m., with final playoffs and awards for both at 6 p.m. at the Fiddler’s Stage.

Highway 190 through Death Valley is closed through Furnace Creek for the arrival of the mule train Friday morning. Another parade takes place at 9 a.m. Saturday, Nov. 8 down a back street from the Furnace Creek Resort shopping area through the date grove to the golf course, which includes groups like E Clampus Vitus, the Red Hat Society, hikers, trail riders and others.

The Southwest Mining, Mineral, Lapidary and Craft Show takes place from 9 a.m. to 4 p.m. from Monday through Sunday behind the Furnace Creek Ranch Borax Museum. Only original handmade or machinery made work will be for sale and demonstrations are scheduled.

The ‘49ers Invitational Western Art Show is set up after 4:30 p.m. Wednesday, Nov. 5 on the south lawn of the swimming pool at Furnace Creek Ranch, from 9 a.m. to 4:30 p.m., Thursday through Saturday, and from 9 a.m. to noon Sunday. The categories include oil, watercolors, sculpture, mixed media and acrylic. Auctioneer Steve Orcutt will auction artwork with proceeds benefiting the ‘49er educational programs Saturday morning.

An event added recently is the 1849 Poker Tournament, at the Marquez Room in the historic Furnace Creek Inn, open to players 21 years and older. The goal is to attract 40 players for an initial round, it includes a costume contest and most players are dressed in 19th century period attire.

Tee times for the Death Valley ‘49ers Golf Tournament are from 8 a.m. to noon Thursday through Saturday. The format Thursday and Saturday is a two-person scramble, on Friday it will be stroke play.

The festival is sponsored by the Death Valley 49ers, an all-volunteer, non-profit organization that began in the centennial of the 1849 journey, mostly members from Inyo, Kern, Los Angeles and San Bernardino counties. It seeks to expand public awareness of Death Valley.