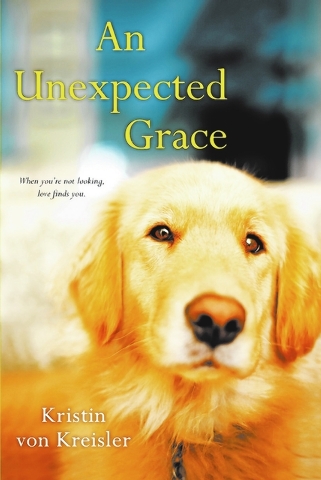 Oh, you ate it when you had to, but it wasn’t the first thing on your plate. You’re not too fond of liver, either, and you can’t stand the smell of a banana.

At the table and in life, everybody has their own tastes, likes, and dislikes. The good thing is, as you’ll see in “An Unexpected Grace” by Kristin von Kreisler, you always have the option to change your mind.

Ever since she’d been bitten as a child, Lila Elliot was terrified of dogs. She didn’t trust them and she did not want one — partly because of fear and partly because, with the disintegration of both a relationship and a dream of being an artist, Lila had enough trouble taking care of herself. The last straw fell when she became the victim of workplace violence.

Once released from the hospital, Lila moved in with her friend, Cris, to recover. She loved Cris and her family — her daughter, Rosie, was Lila’s goddaughter — but Cris had two poodles. Adding to the problem, Cris also did rescue work and was fostering a ragamuffin Golden Retriever named Grace.

The story went that Grace had been mistreated, and Cris’s friend, Adam, had “stolen” the dog from her abuser. Cris and Adam wanted Grace to be safe. They wanted to prove to her that there were good people in the world.

They wanted Lila to adopt the dog.

But Lila didn’t much like Grace, and she liked her even less when she agreed to house-sit for Cris for six months. Cris left the dog with Lila, promising that Adam would fetch Grace as soon as they found an adopter. That didn’t look like it was happening any time soon. So, in addition to healing her wounds and getting her artistry back on track, Lila had to deal with this raggedy dog with fangs.

A therapist told Lila that she had PTSD, which was possible; she was obsessed with learning about the man who shot her and why he did it. She was scared of every noise, afraid that it would happen again. Was it possible, she wondered, that having a dog around — even a sad-eyed Golden with a boom-bark — would be a good thing?

As debut novels go, “An Unexpected Grace” is okay. It’s not Pulitzer-Prize-winning material, but it doesn’t need throwing across the room, either.

I did have a few issues with it, though: it’s predictable, for one. Without telling you what happens, you know how it ends, don’t you? I also thought that author Kristin von Kreisler spent way too much time on Lila’s obsession; I tired of it long before Lila “let it go.” And too, animal rescue folks might take umbrage with the leaving-the-dog-with-someone-who-doesn’t-want-her plot.

And yet — this book will put a smile on your face if you love dogs and you’re in the mood for a something light that ends happy. If that sounds right and you can overlook the issues, “An Unexpected Grace” just might be a book you’ll like.